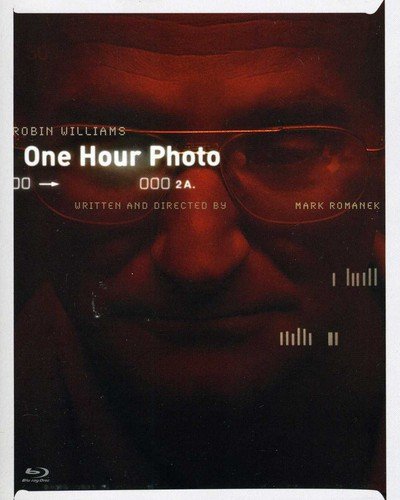 20th Century Fox Home Entertainment has officially announced that it will release the thriller One Hour Photo onto Blu-ray this Spring. The film is written and directed by Mark Romanek and stars Robin Williams, Connie Nielsen, Michael Vartan, and Gary Cole. One Hour Photo will be available online and in stores beginning on May 7th.

The film tells the story of Sy Parrish (Williams), a middle-aged loner who works as a photograph developer in a supermarket. He has gradually become obsessed with one family, the Yorkins, who regularly come to his counter, making duplicates of each film they bring in to be developed and pinning the photographs to the walls of his apartment. When Sy realizes that Will Yorkin (Vartan) is cheating on wife Nina (Nielsen), he steps up his silent interaction with the family, placing evidence of the infidelity in an envelope of photos he has recently developed for young Jake Yorkin (Dylan Smith). Soon however, Parrish reveals his hand, and the Yorkin family realise the full horror of their situation.

One Hour Photo was released in August of 2002 and grossed over $52 million in worldwide box office.

The Blu-ray will include several special features, including: a commentary by Mark Romanek and Robin Williams; an interview from The Charlie Rose Show; Sundance: Anatomy of a Scene featurette; Cinamax featurette; Trailer and TV Spots; and several new featurettes created for the Blu-ray including Cast Rehearsals, Lensing One Hour Photo, Main Title Test, Sy’s Nightmare Elements, Storyboards, and Poster Explorations.