In this classic Walt Disney film, Roger Radcliffe and his pet Dalmatian, Pongo, meet Anita and her pet Dalmatian, Perdita. The respective couples fall in love and get married. Soon, Pongo and Perdita have puppies. However, Anita’s former classmate Cruella De Vil wants to acquire the puppies so that she can have them made into a new fur coat. When Roger and Anita refuse to sell the puppies, Cruella arranges to have them stolen. Now it is up to Pongo and Perdita to save not only their puppies, but the lives of eighty-four other Dalmatian puppies before Cruella can complete her evil plan. One Hundred and One Dalmatians (Feature)

‘One Hundred and One Dalmatians’ Movie Summary 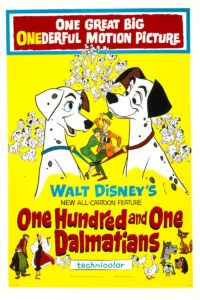 Roger Radcliffe (Ben Wright) is a songwriter who lives alone in his flat in London. His sole companion is his pet Dalmatian Pongo (Rod Taylor). Pongo grows concern about Roger’s solitary life and begins looking for a wife for Roger and a mate for himself. Pongo keeps constant vigilance from the window of the flat and when he sees the perfect pair in the form of a woman named Anita (Lisa Davis) and her female Dalmatian Perdita (Cate Bauer). Pongo gets Roger to take them for a walk in the park so that the two pairs can meet. Eventually, Roger and Anita fall in love and marry. Pongo and Perdita become a couple as well.

Sometime later, Perdita gives birth to a litter of fifteen Dalmatian puppies. The night of their birth, Roger and Anita are visited by Anita’s former classmate, Cruella De Vil (Betty Lou Gerson). Cruella is obsessed with furs and offers to buy Perdita’s entire litter so that she can make a coat. Roger, who does not like Cruella in the first place, refuses to sell the puppies, and Cruella storms out of the house. A few weeks later, Cruella hires two henchmen, Jasper (J. Pat O’Malley) and Horace (Frederick Worlock), to steal the puppies from Roger and Anita’s flat. The henchmen lock up the couple’s head cook, Nanny (Martha Wentworth), in the attic and take the dogs, minus Pongo and Perdita. The henchmen take the puppies to Cruella’s estate called Hell Hall near Suffolk. Pongo and Perdita’s puppies are combined with eight-four other dalmatians that have been acquired from pet stores.

Roger and Anita contact Scotland Yard who are unable to find the puppies. Pongo and Perdita turn to the animal world for assistance and use the Twilight Bark, a canine gossip line, to ask for help from other dogs in and around London. The message reaches the English countryside near Suffolk where it is heard by an old hound dog named Towser (Tudor Owen) and a goose named Lucy (Martha Wentworth). They pass the message onto an Old English Sheepdog named the Colonel (J. Pat O’Malley), a horse named Captain (Thurl Ravenscroft), and a cat named Sergeant Tibbs (David Frankham). Tibbs finds the puppies at Hell Hall. The Colonel sends the news of the puppies’ location back through the Twilight Bark to Pongo in London.

Once hearing the message, Pongo and Perdita leave London to save their puppies. The journey is long, but they make it to the Colonel and his compatriots. At the estate, Tibbs overhears Cruella ordering Jasper and Horace to kill the puppies so that she can make her coat before the police find them. Jasper and Horace delay slaughtering the puppies so that they can finish their television show, and Tibbs uses the extra time to sneak the puppies out of the house. He does not get all ninety-nine puppies out before the show finishes, but fortunately, Pongo and Perdita arrive to hold off the henchmen while the rest of the puppies escape with Tibbs and the Colonel.

Once safely away from Jasper and Horace, Pongo and Perdita realize that they have way more than their fifteen puppies. The parents decide to adopt the eighty-four puppies, sure that their human owners will gladly accept the dogs. The one hundred and one dogs begin making their way back to London through deep snow and harsh weather. Cruella, Jasper, and Horace search the countryside for the puppies, chasing them back towards the city.

In the town of Dinsford, the dogs find themselves trapped. Pongo comes up with an idea for the dogs to cover themselves in soot which makes them look like Labradors. In disguise, Pongo, Perdita, and the puppies board a moving van destined for London right under the noses of the villains. Cruella realizes the deception when the last of the puppies, Lucky (Mimi Gibson), has some of the soot washed off by some dripping snow. The van drives away and the furious Cruella pursues them in her expensive car. Jasper and Horace also pursue in their van. Cruella begins ramming the van with her car while Jasper and Horace try to cut the van off. Jasper and Horace end up colliding with Cruella, running both of their vehicles off the road into a deep ravine. The moving van with the puppies continues safely to London.

Once back in London, Roger and Anita attempt to celebrate Christmas despite their broken hearts over their missing pets. Roger has his first big hit, a song about Cruella. They hear barking outside and suddenly their house is filled with many dogs, still disguised as Labradors. Roger and Anita realize that the rest of their family has returned after they begin cleaning off the dogs. After counting the dogs, they realize that they have one hundred and one Dalmatians, far more than the seventeen they had before. The humans decide to keep the puppies and use the money from Roger’s hit song to buy a larger house in the country so they can have a Dalmatian plantation.