Set on the night of February 25, 1964, One Night in Miami follows a young, brash Cassius Clay as he emerges from the Miami Beach Convention Center the new Heavyweight Boxing Champion of the World. Against all odds, he defeated Sonny Liston and shocked the sports world. While crowds of people swarm Miami Beach to celebrate the match, Clay – unable to stay on the island because of Jim Crow-era segregation laws – spends the evening at the Hampton House Motel in Miami’s African American Overtown neighborhood celebrating with three of his closest friends: Malcolm X, Sam Cooke, and Jim Brown. During this historic evening, these icons, who each were the very representation of the Pre-Black Power Movement and felt the social pressure their cross-over celebrity brought, shared their thoughts with each other about their responsibilities as influencers, standing up, defending their rights and moving the country forward to equality and empowerment for all black people. The next morning, the four men emerge determined to define a new world for themselves and their community. (Courtesy of Amazon Studios)

‘One Night in Miami’ Movie Summary 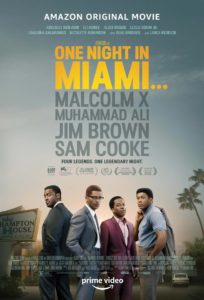 The year is 1963. Cassius Clay (Eli Goree) is fighting Henry Cooper (Sean Monaghan) in a boxing match at Wembley Stadium in London. Clay is easily winning the fight, but despite his manager’s (Michael Imperioli) advice to put Cooper down quickly, Clay dances around and ends up getting knocked down by Cooper. Clay stills wins the fight. Around the same time, singer Sam Cooke (Leslie Odom Jr.) is playing the famous Copacabana club in New York City. Despite Cooke’s popularity, the all-white audience is cold and unenthusiastic towards the black singer. In Georgia, all-pro Cleveland Brown running back Jim Brown (Aldis Hodge) visits family friend Mr. Carlton (Beau Bridges) at Carlton’s home on a vast plantation. The two share a pleasant conversation on the porch, but when Carlton’s daughter asks Carlton to move a dresser in the house, Brown offers to help his friend. Carlton politely declines Brown’s offer and reminds him that they do not let black people into the house. Elsewhere, Malcolm X (Kingsley Ben-Adir) returns home and discusses his plans to leave the Nation of Islam with his wife, Betty (Joaquina Kalukango), over his differences in opinion as to the direction of the organization.

The film then jumps to February 25, 1964. Clay is fighting Sonny Liston (Aaron D. Alexander) for the championship belt in Miami, Florida. X, Cooke, and Brown are also in town to see the fight. X meets with Clay in a hotel room before the fight, and the two pray in the traditional Islamic fashion. That night, Brown acts as the ringside commentator to the fight while Cooke and X are mere spectators. Clay upsets the favored Liston and becomes the world heavyweight champion.

After the fight, X invites the other three men to his motel room. Brown, Clay, and Cooke believe that the invite is for a party but are dismayed to learn that they are the only ones invited to the room. X states that he wanted to spend the evening with the men discussing their accomplishments. Cooke and X soon get into a continuing argument about Cooke’s music and career path. X believes that Cooke has sold out the black community by pandering his music to white audiences. Cooke refuses to feel guilty for his success and constantly touts that he gets paid, well, for his musical contributions.

During the night, Clay informs the men of his plans to announce his conversion to the Nation of Islam, a project that X has been working with him towards. The revelation causes further tension with Cooke believing that X is pushing Clay to the conversion for his own personal agenda. Brown reveals that he is in discussions to appear in a western movie being made in Hollywood. He discusses it privately with Clay, who then announces it to the group a short while later. X looks down upon Brown’s potential film career, but Cooke is more receptive to the idea.

As the night progresses, the conflict between X and Cooke continues to escalate. X continually ridicules the music that Cooke has made since finding success. Cooke insists his success and creative autonomy is itself an inspiration to the black community. Cooke argues that he still cares about the black struggle in America, but writing protest music, and specifically black protest music, is not commercially viable. X counters by pointing out the success of Bob Dylan’s “Blowin’ in the Wind” and argues that if the music speaks to people that it can be inspirational and successful.

Eventually, it is revealed that X’s antagonism of Cooke is motivated, at least in part, by the activist’s stress over his own life. X reveals that he is constantly being followed by FBI agents and often receives death threats directed towards him and his family. He also worries about the schism that has developed between himself and Elijah Muhammad (Jerome A. Wilson), the leader of the Nation of Islam. When Clay shows some apprehension about announcing his conversion to Islam publicly, X is devastated. He tells Clay and the others that he was planning to form his own organization based on the Muslim faith and hoped that Clay would follow him. Clay angrily refuses, feeling betrayed by his spiritual mentor. Clay expresses his concern that X’s assistance in Clay’s conversion has been a ploy by X to attract attention to his new project.

Right then, there is a knock at the door and the men are notified that the press has discovered that the men are meeting at the hotel. Clay goes out to talk to the press. He asks X to go out with him. After they leave, Cooke tells Brown that he has had similar thoughts about “Blowin’ in the Wind”. He tells the football star that he has already written a protest song, but he has yet to perform it.

Following the night in Miami, the men follow different paths. Clay announces his conversion to Islam and officially changes his name to Muhammad Ali. Brown retires from the NFL to pursue his movie career after the Cleveland Browns refuse to let him finish the movie he began during the off season. Cooke debuts his new song on The Tonight Show with Johnny Carson (Christopher Gorham). The song, “A Change Is Gonna Come”, is Cooke’s unheard protest song. X’s life continues to be thrown in chaos as he suffers the consequences of his split with the Nation of Islam. His house is firebombed while both he and his family are inside. They all escape alive. He completes his autobiography a short time later. The film ends with a title card with a quote from X about the inevitability of martyrs for the cause. A comment he made a few days before he was assassinated on February 21, 1965.