A career bank robber busts out of jail with the help of his buddy before kidnapping a US Marshal in the process. The two cons then head to Detroit where they plan to pull off their final heist. However, that Marshal is now free, and she’s hot on their tail even though she’s attracted to one of them. 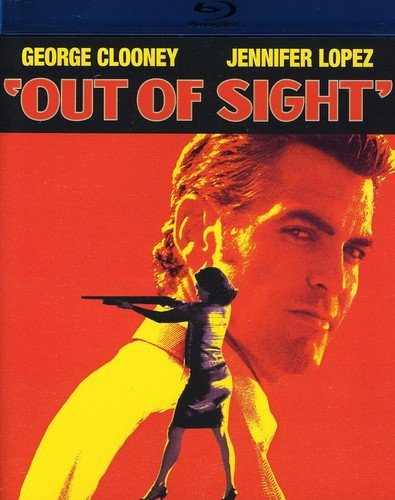 Out of Sight [Blu-ray]

‘Out of Sight’ Movie Summary 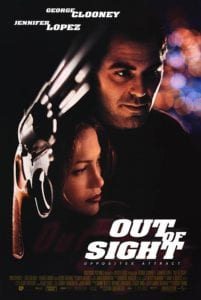 Out of Sight begins with convicted bank robber, Jack Foley, storming out of an office building in Miami, Florida. He rips off his tie, and slams it on the ground. Spotting a SunTrust bank across the street, Jack impulsively walks in, observes the people there, and robs it.

After comforting the teller on a job well done, Jack walks out of the building, and to his car; which won’t start. Two officers approach the vehicle, and apprehend Jack without incident.

The story then flashes back two years when Jack’s incarcerated at Glades Correctional facility in Florida. After playing a bit of inmate basketball, Jack subs out, and sits. He takes a moment to look at the old ‘lifers’ in the crowd, and vows not to be one of them.

Mixed in with the other inmates, Chino and Lulu jog in the prison yard. Jack chats with them a bit when they are done. He knows they are planning to break out of the prison. The two have moved their timetable up because the facility is busy erecting another security fence outside the current perimeter which is also beyond their current tunnel’s escape point. Jack then tells a guard about a plot he knows about, and instructs him to come to the prison chapel later that night for more details.

Over in Miami, US Marshall, Karen Sisco, lunches with her father who is a retired US Marshall. He gives Karen a SIG-Sauer P232 pistol as a birthday gift. He then voices his concerns about her relationship with the married Ray Nicolette, another US Marshall. Not wanting to talk about it, Karen changes the subject about needing to go to the Glades Correctional facility later that evening.

That night, Karen arrives, and parks in the parking lot as Jack’s bank robbery partner, Buddy Bragg, arrives too. Chino and Lulu start their escape while Jack watches on in the prison chapel. The one guard Jack told to meet him there arrives, and Jack tells him to watch the other side of the fence for escapees.

As the guard looks out to the prison yard, Jack hits him from behind with a vase; knocking him out. Still parked in her car, Karen sees the men pop out of the escape tunnel, and she immediately gets the tower guard’s attention. Four men emerge from the tunnel with the tower guards immediately shooting two of them. Chino and Lulu escape into the Florida wilderness.

Jack then comes out, dressed in the prison guard’s uniform, and tells the other guards running up to the escape point that the tunnel is clear of escapees. Karen, by this time, has her shotgun in hand, and Jack distracts her long enough for Buddy to walk up from behind, grab her, and shove her into her car’s trunk. Jack jumps in with her, and Buddy drives off to safety.

While in the trunk, Jack and Karen talk about movies, and the two form a little crush on each other. Buddy interrupts their conversation when he stops at a highway underpass to meet fellow convict, Glenn Michaels. He has another car for them to jump into to freedom.

Jack gets out of the trunk, but Karen starts shooting at them from inside with the SIG-Sauer. Jack slams the trunk shut; locking Karen inside. Jack gives Karen a choice to give up, or Buddy will shoot her with her shotgun he’s now holding.

She gives herself up, and Jack puts her handcuffed into Glenn’s car. While Buddy and Jack talk outside the vehicle, Glenn drives off with Karen, and without Buddy and Jack. So, Buddy and Jack hightail it back to Miami alone where Buddy has an apartment.

Jack draws a bath, and gets in. Karen magically appears with gun in hand, and finds Jack in the tub. After staring at him, Jack opens his eyes, and she jumps in the tub with him. Karen snaps awake where she finds herself in a hospital bed. Her father’s there by her side, but her wet-behind-the-ears boss, Daniel Burdon, shows up to question her about the incident.

She recounts meeting Glenn from a prisoner transfer years earlier, and used that to convince Glenn to leave Buddy and Jack. During a brief argument on the best way to drive back to Miami, Karen grabbed the steering wheel; causing the car to spin into an impact attenuator at the entrance of a highway off ramp. The collision with the cowboy cushion knocked Karen out cold. Burdon finds the story fishy, but lets it slide.

Over at Buddy’s apartment, Jack snoops through Karen’s purse. Buddy wants to immediately leave town, but Jack pines to see Karen one more time. Jack calls her at her home where she tries to get Jack to turn himself in. When Buddy talks in the background, Karen recognizes his voice. Realizing that Karen can now figure out where they are hiding out, Jack hangs up on her.

The men are on borrowed time because Jack once told Chino about his ex-wife, Adele, and where she lives. He knows Chino will come looking for him at Adele’s place, and he also realizes the US Marshalls will soon find Adele too. So he and Buddy set out to warn her before leaving to Detroit.

As they arrive, Jack spots Karen getting out of her car to go meet Adele. Satisfied Karen is safe, they drive back to the apartment to prepare to leave town. Chino also finds Adele’s place, and while Karen questions Adele about Jack, Chino arrives. He pounds on Adele’s door, and breaks in. However, Karen promptly arrests him, and then immediately calls Burdon. She uses Chino’s arrest to get on Burdon’s team that’s out looking for Jack and Buddy.

Back again at Buddy’s apartment, the two men prepare to leave for Detroit. Burdon and his team also arrive to arrest them. He makes Karen sit in the lobby as a lookout, and they head up the stairs to Buddy’s room. However, Buddy and Jack have already entered the elevator to the parking garage. When it stops to let a man out of the lobby, Karen and Jack spot each other, but she doesn’t alert Burdon and his men right away. Jack and Buddy make it to the car, and head out of town.

They, along with Glenn, plan to rob former inmate, Richard Ripley, a wealthy embezzler, of $5 million in uncut diamonds that he keeps at his home in Detroit. Glenn, thinking that Buddy and Jack were caught, tells another former inmate, Maurice “Snoopy” Miller, who lives in Detroit, about the plan. Snoopy decides to steal the diamonds too.

While driving around town, Snoopy bullies Glenn, and takes over as the leader of the diamond heist. To prove his allegiance to Snoopy, Glenn must help him and his little gang kill a rival drug dealer. Glenn participates, but the experience horrifies him.

After the murder, the group goes to the Kronk Gym. Jack and Buddy find them there, and agree to meet the next night to discuss the heist.

Karen arrives in Detroit too, and meets with agent Raymond Cruz, who’s in the midst of a murder investigation; the one Snoopy and his gang just committed. He gives Karen Snoopy’s address, and she talks to his sister. Although she hasn’t seen Snoopy for months, she knows he loves boxing, and can probably be found at some matches at the State Theatre the next night.

Later that night at her hotel, Jack appears, and the two share a drink, and then go to her room for sex. She wakes up the next morning alone, but Jack left her SIG-Sauer that he took from her in Florida as a memento.

That night at the State Theater, Glenn sits with Snoopy’s gang for a bit before leaving to go to the bathroom. He takes the opportunity to leave the theater. Unfortunately for him, Karen’s there waiting for him. He tells her how much Snoopy scares him, and that he just wants to leave. He also tells her about the diamond heist. Karen lets Glenn go, and he runs off into the cold night.

As Jack and Buddy prepare to rob Ripley, Jack thinks back to a meeting with Ripley at his Miami office. While in prison, Ripley offered Jack a job with his company once he got out of jail, and at the meeting in Miami, Jack learned the job was as a low-wage security guard. This position angered Jack because he thinks he’s due a better job for protecting Ripley in prison, but Ripley believes Jack is nothing more than a petty thief not worthy of a better job. He has Jack tossed out of the building. That’s the building we see Jack leaving at the beginning of the movie; the one he leaves to rob the bank which lands him in jail again.

Back at the State Theater, Jack and Buddy meet up with the Snoopy’s gang consisting of him, White Boy Bob, and Kenneth. Now, Snoopy plans to rob Ripley that night, and the men head off to do the job. Unbeknownst to them, Karen follows behind.

When they arrive, White Boy Bob poses as a plumber, and forces his way past Ripley’s housekeeper, Midge. Everyone then enters, and Snoopy demands to know where Ripley’s at. Midge says he’s in Florida for the winter.

Maurice, Bob, and Kenneth take Midge to Ripley’s bedroom where he has a safe. They try to shoot it open, but Midge knows the combination, so after a failed attempt with their guns, she tells them the combination. However, the safe only stores Ripley’s toupees.

Meanwhile, Jack’s looking in other rooms for the diamonds. While in Ripley’s office, Jack finds Ripley hiding in its bathroom, and he’s on the phone with 911. Buddy then finds them, and Jack tells him the diamonds are in the fish tank. He tells Buddy to take them so they can leave without Snoopy and his boys.

Once the two men have the diamonds, and are safely in the van, Jack tells Buddy to leave with the diamonds. He will meet up with him later because he wants to keep Kenneth from raping Midge. Buddy gives Jack his gun, and then drives away. Jack then heads back into the house.

Jack finds Kenneth trying to rape Midge, and he shoots Kenneth after Kenneth shoots at him first. As Jack turns, White Boy Bob appears at the bottom of the staircase with a gun of his own, but while walking up the stairs to Jack, he slips, and shoots himself dead.

Snoopy shows up, and shoots at Jack, but misses. With both men out of bullets, they fight. Snoopy has the upper hand with his boxing skills. He runs to grab White Boy Bob’s gun while Jack runs back to the bedroom for Kenneth’s gun. Karen shows up, and shoots Snoopy dead.

Karen then orders Jack to surrender, but he comes out of the bedroom with a gun in his hand. Not wanting to go back to prison, he tells her to kill him. She can’t, and shoots him in the leg instead; then cuffing him to the staircase where Cruz arrives, and arrests him.

The next day, Karen transports him back to Florida in a police van with another prisoner named Hejira Henry. Karen smiles as they all drive off to an unknown future.