In this animated musical, Fei Fei is a young girl who believes in the legend of the Moon goddess Chang’e. After her mother dies, Fei Fei continues to believe in the legend while the rest of her family drifts away from belief. Fei Fei decides to build a rocket ship to fly to the Moon to gather proof of Chang’e’s existence. However, when her future stepbrother Chin nearly ruins the mission by stowing away on the ship, Fei Fei and Chin soon find themselves in an unexpected world that does not live up to Fei Fei’s expectations.

‘Over the Moon’ Movie Summary 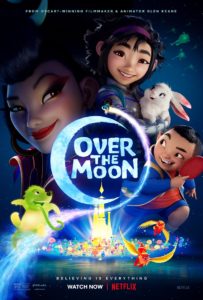 A young girl named Fei Fei is told the legend of the Moon goddess Chang’e by her parents. According to the legend, Chang’e took a potion for immortality which caused her to become a goddess and ascend to the Moon without her lover Houyi. Now, Chang’e waits for her beloved to join here on the Moon. The story is told throughout Fei Fei’s village and even celebrated. As part of that celebration, Fei Fei and her parents prepare mooncakes for her village’s annual Moon Festival. However, Fei Fei’s mother (Ruthie Ann Miles) falls ill, and gives her daughter a bunny named Bungee, before passing away shortly after the festival.

Four years later, Fei Fei still believes in Chang’e. Her father Ba Ba (John Cho) still prepares mooncakes for the festival, although he does not do it with as much enthusiasm. Fei Fei becomes upset when she learns that her father is engaged to Ms. Zhong (Sandra Oh) and is constantly annoyed at her young son Chin (Robert G. Chiu). The two kids celebrate the festival together with their betrothed parents. During the meal, Fei Fei realizes that her father no longer believes in Chang’e as her family dismisses the goddess’s existence. Fei Fei gets upset and runs away to the lake she used to go with her family where she mourns her mother.

Inspired by a crane and the legend of Chang’e, Fei Fei decides to build a rocket to the Moon to prove that Chang’e is real. She designs a rocket in the shape of a rabbit and in the spirit of a Chinese paper lantern that uses fireworks to create velocity. She and Bungee are successful in getting the rocket off the ground, but she soon realizes that Chin has snuck aboard her rocket and thrown off the weight calculations. They begin to crash towards the Earth until they are suddenly captured in a mystical beam of energy and taken to the Moon. Once there, they crash land after being attacked by playful spirits, who then rescue them and take them to Lunaria, a kingdom composed entirely of light on the dark side of the moon. Lunaria is the home of Chang’e.

Once there, Fei Fei and Chin are introduced to Chang’e (Phillipa Soo) and her backup dancers, the Lunettes. Chang’e tells Fei Fei that she was supposed to deliver a gift for Chang’e to bring Houyi back. Fei Fei asks to take a photo with Chang’e to prove to her family that she is real. Chang’e agrees, but the goddess takes the photo and demands the gift from Fei Fei. However, the young girl does not know what she is talking about. A frustrated Chang’e states that she senses the gift on the moon and announces a competition to find her gift before the last of the moondust falls. Fei Fei gets upset with Chin for throwing off her plans and leaves him and Bungee, getting a ride with the Lunarian Biker Chicks to the crash site.

Meanwhile, Chin sees some Lunettes with the photo and is captured by Chang’e when he tries to acquire it. Chang’e demands to know the location of the gift from the young boy, which he does not know. Chang’e challenges Chin to a game of ping pong and promises that she will give Chin the photo if he wins, which he does. Chang’e does not accept the loss well, and Chin chides Chang’e on her past selfishness of taking the potion for herself which caused her separation from Houyi in the first place. This upsets Chang’e so she traps Chin in a chamber and refuses to give him the photo. Chang’e then cries in despair over her lost love, believing that she will never see Houyi again. Her crying causes a meteor shower. With Chin imprisoned, Bungee escapes and follows the Jade Rabbit, one of Chang’e’s loyal servants, into his workplace. Once there, they each fall in love with each other. Soon after, Chin wills himself to escape from his barrier to help his future stepsister.

Meanwhile, Fei Fei and the Biker Chicks dodge the falling meteorites falling from orbit which are caused by Chang’e’s emotional breakdown. They head for Fei Fei’s crashed rocket ship. Once there, Fei Fei meets an exiled Lunarian named Gobi (Ken Jeong). In the rocket shop, Fei Fei finds the Chang’e doll that her mother gave her as a young child and believes that it is the gift that Chang’e seeks. The Biker Chicks steal the doll and leave Fei Fei and Gobi with the crashed ship. The pair head back to Lunaria by riding on the backs of giant toads. During the journey, Gobi reveals that he was exiled by Chang’e for singing a song that stated that the goddess should move on from Houyi.

Fei Fei and Gobi catch up with the Biker Chicks and fight over the doll. However, the doll is destroyed during the struggle. Afterwards, Fei Fei discovers a broken half of an open jade circle in one of her mooncakes and concludes that it is the gift that Chang’e is looking for. Fei Fei and Gobi return to Lunaria’s palace where they reconnect with Chin and Bungee. They present the broken half of the jade circle to Chang’e who makes it full again with her half of the jade circle. For a moment, Chang’e is reunited with her love, but Houyi explains that he cannot stay and tells Chang’e that she needs to move on before he fades away. Chang’e refuses to accept reality and slips into a deep state of sadness which causes all the light in Lunaria to go out.

Fei Fei tries to reach Chang’e, but the moment that she enters Chang’e’s state of sadness, she too becomes depressed due to witnessing a vision of her mother’s death. Fei Fei realizes that she never accepted losing her mother. Chin jumps into the sadness to save his “sister”. Chang’e and Fei Fei both realize that they need to find the love all around them. Chang’e finds it in the form of the Lunarians and Fei Fei in the form of Chin. This discovery allows them to accept their loved ones’ deaths which restores life to Lunaria.

Chang’e thanks Fei Fei and allows her and Chin to return to their home. Bungee stays on the moon with Fei Fei’s blessing to stay with Jade Rabbit. Chang’e also lifts Gobi’s banishment. Fei and Fei say goodbye and return home. Once back on Earth, Fei Fei carries a sleeping Chin home. Fei Fei finally accepts her father and Mrs. Zhong’s marriage and welcomes Chin as her brother. A year later, Fei Fei is living happily with her new family and continues to look up at the Moon, watching as cranes fly up towards it in the night.