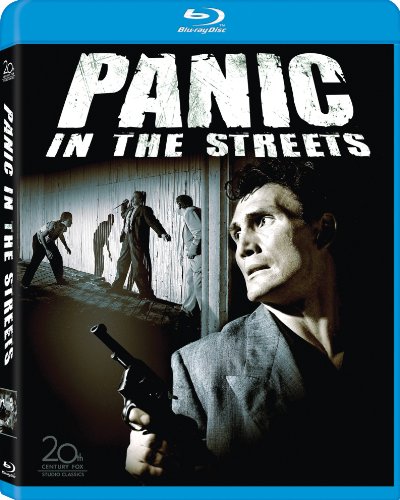 Panic in the Streets Blu-ray

20th Century Fox Home Entertainment has officially announced the Blu-ray release of the New Orleans noir Panic in the Streets.  The film, which was directed Elia Kazan and starred Richard Widmark, Paul Douglas, Barbara Bel Geddes, and Jack Palance, will be available for purchase on March 26, 2013.

When a stowaway and illegal immigrant named Kochak is murdered in the New Orleans slums by a vicious hoodlum and his friends, health official Dr. Clinton Reed (Widmark) discovers that the body was carrying pneumonic plague.  If he can’t figure out who came into contact with the body and inoculate them, a plague could threaten the city.  However, Kochak was killed by a gangster named Blackie (Palance) and nobody seems to want to talk.  As the hours count down, Dr. Reed and police captain Tom Warren (Douglas) investigate the city.  Can a doctor turn detective?  He has 48 hours to try.

Panic in the Streets was released in June of 1950 and grossed over $1.4 million at the box office.  The film won an Academy Award for Best Writing, Motion Picture Story.

Exact technical specifications, cover art and special features have yet to be revealed.

Disclaimer: Affiliate links are contained in this post. This means when you click a link, and purchase an item, Movie House Memories will receive an affiliate commission. Advertisers and Affiliate Partnerships do not influence our content. See our Terms of Use about the inclusion of affiliate links on this site for more information.
January 27, 2013
1 minute read
Show More
Back to top button
Close
Close