Parenthood is the story of the Buckman family and friends as they struggle with the difficulties of raising children. They suffer through and enjoy all their events in life from estranged relatives, to black sheep of the family, to the occasional crazy relative, the skeletons in the closet, rebellious teenagers, and the kitchen sink. 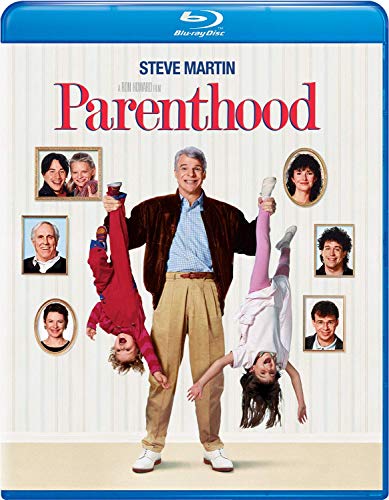 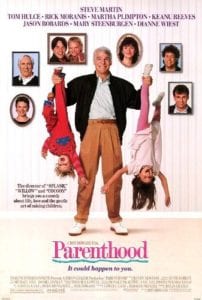 In the year of Batman’s new beginning, Marty McFly’s middle, and Indiana Jones’ ending-that-should-have-been comes another superhero movie. One filled to the brim with nostalgic fathers falling off horses in a single bound out of the saddle; single mothers with glow-in-the-dark, battery-operated items found in her dresser drawer; and, Ted Theodore Logan blowing up his time-machine to win the heart of his impregnated teenage bride.

That’s right… We are talking “Parenthood”. That Ron Howard-directed masterpiece filled with SCTV and SNL comedians who aren’t as funny as they are thought-provoking and tiny child actors stealing scenes from some of the best actors of the 80s and 90s. We are introduced to the entire dysfunctional shitty-father Jason Robards’-led family:

First, we have eldest son, Gil, played by Steve Martin being, well, Steve Martin. A loving, excellent father who wants to be everything to his wife and children that his own, bulldozer of a shitty father wasn’t – a stand-up comedian with a heart. With beloved wife, Mary Steenburgen, caring for their three not-so-perfect children in a home and lifestyle straight out of Hollywood casting of the Lifestyles of the Rich and Father of the Bride, we are sure to see family heartache done to humorous familial effect.

Next, the eldest daughter, played by lovely Dianne Wiest as Helen, is a shrew of a divorcee fresh off divorcing a non-existent jerk of a dentist we never see. She is trying to make sense of her uber-intelligent teenage daughter’s dumbass choice of a time-traveling dunce of a guitar-playing boyfriend. She’s also trying to connect with her decidedly bizarre and non-communicating Leaf Phoenix-styled loner son… played by a kid that looks a lot like Leaf Phoenix but the ever-present wrinkled grocery bag does all the acting.

The third adult child, daughter Susan, played by nobody memorable anymore, is married to Rick Moranis – the most interesting character in this marriage. He spends every waking moment teaching their charming three-year-old Abstract Algebra, Latin, and everything Einstein tried to figure out before he died while mom eats pre-opened Hostess cupcakes out of a shoebox. Susan isn’t particularly happy about being relegated to second-fiddle by her own innocent daughter while her husband plays college professor to their Harvard-bound toddler.

Then there is the youngest – a still-drugged-out Amadeus playing Larry the shyster and favorite son of shitty-father extraordinaire, Jason Robards. On Thanksgiving as a surprise for the disapproving older siblings, Larry arrives with massive gambling debts, empty pockets and, oh yeah, an illegitimate son of a murderous ex-girlfriend who skipped the country.

Now THIS is a FAMILY! The story is called “Parenthood” due to four generations of parents dealing with issues we have all seen in one fashion or another in ours or other families we know since we all have family members owing gangsters $26,000 from a single basketball bet.

Gil is forever trying to out-do his own father’s failings by over-stimulating, over-achieving and over-loving all three of his children. He’d realize how phenomenal of a father he is if he’d stop being the Wild-and-Crazy Guy for a moment and realize they just need Dad sometimes. Gil and his wife are told their eldest son may need special education due to Mary Steenburgen’s smoking grass while the child was in her womb.

Gil’s boss gives the company partnership to a weasel who couldn’t care less about family. And a stripper shows up to his son’s ninth birthday party. What’s a father to do? Become Cowboy Gil of course! Armed with a miniature cowboy hat, mutilated carpet chaps, matching six-gun squirt guns, and balloon intestines, no rootin’, tootin’ birthday blues are gonna get his son down! Besides, even in stressful times, Mary Steenburgen is always there to give him h… help relieve the stress by driving the family van into a guardrail.

Helen never looks in the mirror but if she did, she’d realize her incredibly unattractive but articulate daughter, Julie, is just lashing out at an overprotective mother by dating the biggest loser she can find – that isn’t a battery-operated pleasuring device. What they both don’t realize is this is Ted Theodore Logan that our entire species worships in the distant future, not some loser. His best Keanu Reeves’ impersonation underlies an incredibly soulful son-in-law-to-be that is both world-wise philosopher – and cool race car driver with a bad haircut. Son Gary is just wasted space that needs a father figure, more XXX-rated movies – and a new paper grocery bag.

Susan has decided that the only way she can get her husband – and her life back – is by stabbing her innocent diaphragm to death so she can have another kid because that’s all the world needs is another miniature asshole genius with no social skills. Her uptight husband finds out and tells her one kid is all they need so the baby can take home the Nobel Prize next year. Susan decides divorce is a better solution than having a hole in her contraceptive device anyway.

Larry schemes and schmoozes his father enough to leave his sweet, neglected son, Cool, with his grandparent parents. But, after failed attempts at negotiating his gambling debts down and showing off his professional stuntman-like dismounts from a moving car to his unforgiving debt holders, Larry negotiates with his father a couple thousand dollars and skips town to a permanent all-expenses-paid excursion to a Chile death sentence. Shitty father Jason Robards realizes the error of his shitty fathering ways and decides he’s chosen the wrong shitty kid to put his faith in.

In the end, we realize that family is all that matters – except money in Larry’s case. Babies, baseball and birthday parties with Shetland pony poop are all that’s needed to make us realize that for every merry-go-round shitty parent there’s a roller-coastin’-ridin’ Wild-And-Crazy parent waiting to cheer on his head-butting toddler while the child selfishly tears down an entire elementary school play in front of a bunch of angry, asshole parents who didn’t want to watch their kid do a once-in-a-lifetime activity anyway – and he can laugh about it. Since the movie isn’t about them anyway.