In Paths of Glory, Stanley Kubrick explores the futility and irony of the war from the trenches of WWI. Colonel Dax is the commanding officer of the 701st Infantry Regiment in the French army. He must deal with not only mutiny from his men, but also a glory-seeking general after part of his force falls under fire in an impossible mission. 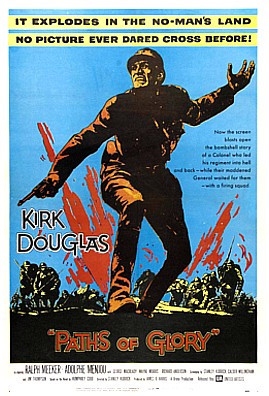 Stanley Kubrick‘s Paths of Glory begins when the bigshot French General, General Broulard (Adolphe Menjou), pays a visit to General Mireau (George Macready). He requests that Mireau order his men to take a strategically important position on the front in the first world war called the ant hill. Mireau hesitates because his men aren’t ready for such a difficult mission. However, he ultimately agrees to the order.

General Mireau approaches Colonel Dax (Kirk Douglas), and says he’s just the man for the job. He orders Dax to prepare for an attack. Dax says that his men don’t have what it takes right now,  but it’s a direct order. The General beleives that while many men will lose their lives, he’ll have a few left over in the aftermath.

The Germans slaughter the French

The day of the advance, the Germans slaughter the French Army, they can’t even get close to the ant hill. They pause before an ultimately retreat—some men don’t even leave their trenches. General Mireau watches on in horror as his men retreat. When he orders his artillery to fire on the French trenches to teach his men a lesson about cowardice, the artillery refuses.

After the battle, General Mireau can’t calm down. He wants the court martial of 100 French soldiers for cowardice before executing them as a lesson to the others. Colonel Dax and Broulard haggle with Mireau. They agree to only try three for cowardliness, and anyone they find guilty, they will shoot. The commanding officers pick the three for trial.

They appoint Colonel Dax, who before the war was the finest defense attorney in all of France, as counsel for the men’s kangaroo court. The trial is brief, unfair, and jury finds the men predictably guilty of cowardice. The judge orders their quick execution.

The three men spend an agonizing night locked up. Meanwhile, Colonel Dax learns from the artillery officer of General Mireau’s order to fire on the French trenches. Dax takes this info to General Broulard trying to save his men from execution. However, his plea falls on deaf ears, and the execution will still take place.

A firing squad shoots the men, and each one dies with varying degrees of braveness. After the execution, General Broulard relieves General Mireau of his command for his order to fire on the trenches. This shocks and offends Mireau for the military removing him in such a manner after all his years of service.

After he leaves, Broulard offers Mireau’s command to Dax—stating that Dax played the political game well to get rid of Mireau. Outraged, Dax states that his efforts were to save his men. They were sincere, and weren’t just a ploy to get hand over Mireau. Broulard finds this amusing, but unmoving. He brushes off Dax and his scruples.

The film ends with a scene in a bar. A pretty German girl comes to entertain the French troops in what they hope is a bawdy form of revenge on their German proxy. However, the German girl sings a German folk song about a young man called off to war. While he fights for his country, back home his love dies. The soldiers cease their jeers and cat calls to hum solemnly to the German song. Dax, seeing this, gives them just one more moment to themselves before calling them back to the front.