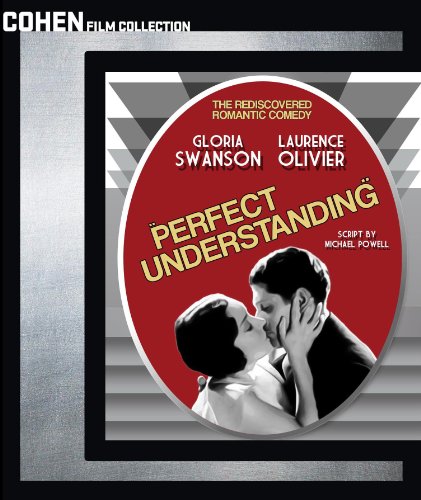 Cohen Media Group has announced that they are adding Perfect Understanding to their upcoming slate of Blu-ray releases. The film was directed by Cyril Gardner and stars Gloria Swanson, Laurence Olivier, John Halliday, and Nigel Playfair. Perfect Understanding will be available in stores and online June 4, 2013.

In the film, Judy (Swanson) and Nicholas (Olivier) are a young society couple who marry based on the understanding that they will be allowed to enjoy extramarital adventures and never let jealousy come between them. That arrangement is soon put to the test. During their honeymoon, they go to Cannes to spend time with friends. Judy decides to go back to London to set up their new home, but insists Nicholas remain with their Riviera friends. One night, when drunk, Nicholas sleeps with a former lover (Nora Swinburne) and, when he returns to Judy guilt-ridden, soon confesses his indiscretion. She forgives him, but Nicholas begins battling his own feelings of jealousy when he comes to believe that Judy has slept with an old friend (Halliday).

Perfect Understanding was released in March of 1933.

Disclaimer: Affiliate links are contained in this post. This means when you click a link, and purchase an item, Movie House Memories will receive an affiliate commission. Advertisers and Affiliate Partnerships do not influence our content. See our Terms of Use about the inclusion of affiliate links on this site for more information.
May 24, 2013
1 minute read
Show More
Back to top button
Close
Close