Pet Sematary, follows the tragic story of the Creed family. After their cat is accidentally killed, a friendly neighbor advises they bury it in a mysterious cemetery nearby. When the cat comes back to live, it’s only the beginning of an unthinkable evil leading to hell and back. So it seems, sometimes dead is better. 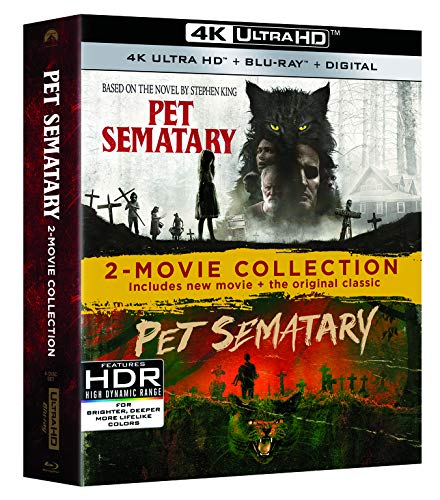 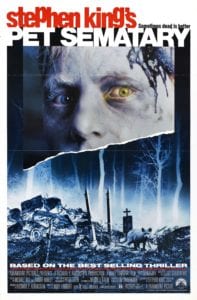 The film introduces us to Louis and Rachel Creed who relocate their family from Chicago to Ludlow, Maine after Louis accepts a job as a doctor with the University of Maine. Besides Ma and Pa Creed, the family has two children, Ellie and Gage, and their cat, Church.

The road in front of the new Creed homestead doubles as the final lap of the Indianapolis 500 with semi-trucks racing to see what they can hit quicker than you can scream, “Gage, look out for that truck!”

Fred Gwynne plays the Creed’s neighbor, old Jud Crandall. He’s just 23 years removed from playing Herman Munster, and 3 years shy of referring to the “two Utes” whatever that is. Jud is a widower who lost his wife during the adaptation of the book which is a horrible way to go. The Creeds quickly adopt him as one of their own, and he becomes Louis’ confidant. Jud entertains the Creeds with wholesome activities such as visits to the pet cemetery in the woods where the town buries all the roadkill from the semi-trucks.

On his first day at work, Louis encounters a jogger who had a mind-blowing experience with the front end of a car. Even though the jogger, Victor Pascow, has his brains in his lap, Louis believes he’s only mostly dead, and not all dead, so he can save the jogger. Louis fails, but Pascow jolts awake anyhow, and warns Louis about the pet cemetery. Then, just as suddenly, Pascow dies, and proceeds to haunt the Creed family for the remainder of the movie.

Despite his gruesome appearance, Pascow is a friendly ghost, like Casper. One night, he leads Louis in his pajamas on a walkabout to the pet cemetery and warns him not cross the barrier because the ground has gone “sour”, like 2-month-old milk. Louis awakes the next day, believing he had a very lucid dream, but when he finds his feet covered in dirt, he wonders if it was really a nightmare.

During the Thanksgiving holiday, while Rachel and the kids visit Rachel’s parents, Jud and Louis find Church out of lives from one of those semi-trucks hauling 400 cases of Coors to Atlanta in 28 hours. Louis tells Jud how devastated Ellie will be; Jud, feeling sympathetic, takes Louis and the Hefty bagged Church past the pet cemetery to the ancient, abandoned Micmac burial ground to bury the family pet.

Jud instructs Louis to bury the cat, and not to tell a sole about what has happened. The next day, Church comes back from Mordor, but this time he has really bad odor and an even worse attitude… but then cats can be dicks, so that attitude could be normal. Church frequently attacks Louis, and Jud explains that he has also revived a pet at the burial ground and that sometimes they don’t come back right.

A few weeks later, a truck 18-wheels over 2-year-old Gage along the same highway when he chases a kite into the roadway. The family is obviously devastated, and Louis begins to ponder planting his son in the burial ground to bring him back. Jud warns against it telling him that sometimes dead is better. Jud tells him that people have been buried there before, and that they come back evil. Jud also expresses that he thinks by introducing Louis to the burial ground, that he may have inadvertently released the evil spirits that have caused all the Creed family misery.

After Gage’s funeral, Rachel and Ellie leave for Chicago while Louis remains home to contemplate his dark deeds. The friendly ghost Pascow tries to convince Louis not to bury Gage there, and ultimately turns to haunting Ellie and Rachel to try to stop Louis. However, Louis ultimately digs up his son’s body and buries him in the burial ground. Once home, Louis collapses on his bed.

Gage returns, and he is as evil as expected. He quickly hobbles and then kills Jud at the old man’s house. Rachel returns home, and her evil son kills her too. Louis awakens across the street in the Creed home when Gage calls him from Jud’s house. Louis suddenly (and inexplicably) decides that he must kill his son. He loads up some syringes with a death cocktail, and quickly takes care of Church the cat before taking on his son.

After a battle that shouldn’t take as long as it did since it is a grown man taking on a 2-year-old child, Louis kills Gage with the morphine injection. He then lights Jud’s house on fire, burning the bodies of Jud and Gage. Louis carries Rachel’s gruesome body to the burial grounds, despite Pascow the friendly ghost yelling at him to stop. The film ends with Louis sitting in his kitchen when we hear someone enter the Creed home. Rachel has returned, or at least, most of her has. Louis and Rachel engage in a passionate kiss, as the camera focuses in on Rachel picking up a butcher knife. The screen turns to black as we hear Louis scream.