An adaptation of J. M. Barrie’s story about a boy who never grew up. The three children of the Darling family receive a surprise visit from Peter Pan and Tinker Bell, who take them to Never Land. Once there, the Darling children meet the Lost Boys, Peter’s gang of rag tag runaways, who are in a constant war with the evil Captain Hook and his pirate crew. However, the Darling children eventually have to make the decision to stay forever young in Never Land, or return to London where they will be forced to grow up. 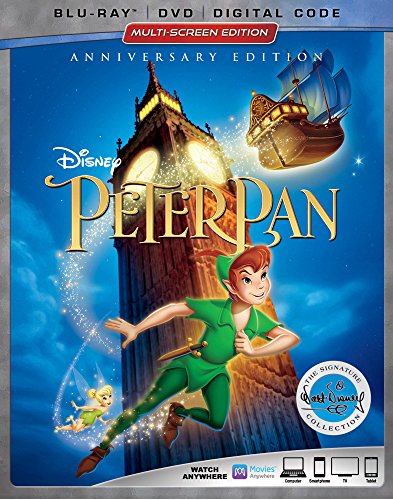 In London, England, near the turn of the 19th Century, George and Mary Darling (Hans Conried and Heather Angel) prepare for a night out away from their kids. However, their two boys, John and Michael (Paul Collins and Timothy Luske), disrupt their preparations with their imaginary game play as Peter Pan and the pirates. The boys have learned of Peter Pan from stories told to them by their older sister Wendy (Kathryn Beaumont), much to the chagrin of Mr. Darling.

Their father has grown tired of the stories and declares that Wendy is too old to continue sleeping in the nursery with the boys. Mr. and Mrs. Darling leave for the party, and the kids are visited a short time later by Peter Pan (Bobby Driscoll) himself. Peter offers to take all three children to the island of Never Land, and along with his pixie friend Tinker Bell, teaches the kids how to fly.

Peter, Tinker Bell, and the kids fly to Never Land. Just off the shore of Never Land, Captain Hook (Hans Conried) has anchored his pirate ship. Hook seeks to take revenge upon Peter Pan for cutting off his hand. However, he fears the crocodile, Tick Tock, who ate Hook’s hand and wishes to eat the rest of him. Peter takes the kids to meet the Lost Boys, a group of boys who stay forever young and are loyal to Peter Pan. Tinker Bell is jealous of Wendy due to all the attention that Peter pays to her. She convinces the Lost Boys that Peter has ordered them to shoot down Wendy. Wendy survives, but Peter is furious with the pixie and banishes her from Peter’s group.

John and Michael join the Lost Boys and set off to find the island’s Indians. They end up being captured by the Indians, who are looking for the people responsible for kidnapping the chief’s daughter, Tiger Lily. At the same time, Peter takes Wendy to meet the mermaids, who are initially jealous of Wendy and flee in terror when they catch sight of Hook nearby. Peter and Wendy see that Hook and his first mate, Smee (Bill Thompson), are the ones responsible for kidnapping Tiger Lily. Hook hopes to persuade the Indian girl to reveal the location of Peter’s hideout. Peter and Wendy are able to free her and return her to her father. The Chief honors Peter for his heroism.

His kidnapping attempt foiled, Hook plots to take advantage of Tinker Bell’s jealousy of Wendy to trick her into revealing Peter’s hideout. Hook’s plan is successful. Meanwhile, Wendy and her brothers begin to get homesick and wish to return home. They extend an invitation to Peter and the Lost Boys to return to London, so that the Darling parents may adopt them. The Lost Boys agree, but Peter refuses to grow up and declines their offer. The pirates lie in wait and capture the Lost Boys and the Darlings as they exit Peter’s secret lair. The pirates leave a time bomb in the lair to kill Peter. Tinker Bell learns of the pirates’ vile plot and swoops in just in time to snatch the bomb from Peter just before it explodes.

Peter frantically digs through the rubble looking for Tinker Bell. He finds her, and the pair team up again. They fly to Hook’s ship and confront the pirates. They are able to release the kids before they are forced to walk the plank. Peter fights Hook while the Darling children and the Lost Boys fight the crew. Peter defeats Hook, and the pirate captain flees his ship, pursued by Tick Tock Crock.

Peter takes over Hook’s ship and has Tinker Bell spread pixie dust over the entire ship, allowing it to fly. He flies the ship back to London. The Darling children return to their nursery, but the Lost Boys change their minds and decide to return with Peter to Never Land.

George and Mary Darling return home from the party and find Wendy sleeping in the window sill. Wendy wakes up and tells her parents of their adventures in Never Land. The parents look out the window and see a cloud formation that looks remarkably like a pirate ship. Mr. Darling seems to recognize the ship from his childhood and reminisces. He changes his mind and allows Wendy to stay in the nursery for a little while longer.