When Pete, an orphan, and his best friend Elliot who’s an invisible green dragon, wander into the seaside village of Passamaquoddy, the townspeople think he’s behind a slew of hilarious mishaps. But after a daring rescue, they change their tune and believe in Pete’s fire-breathing buddy. 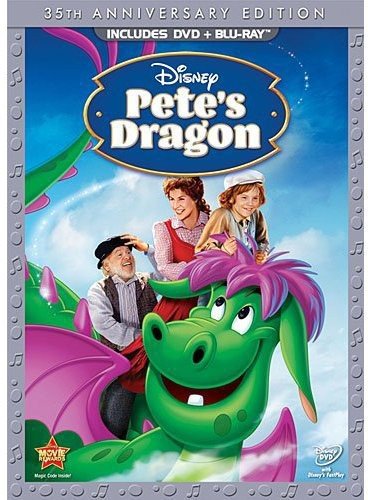 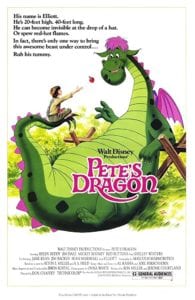 Pete’s Dragon begins in the early 1900s with a young, red-headed boy named Pete on the run from his abusive family. Pete is an orphan because even in the early 20th century, no one wants to keep the soulless gingers. Pete is running from his adoptive hillbilly family, the Gogans, who follow up their outstanding appearance in Deliverance with this Disney gem.

The Gogans conduct a musical search of the woods, telling little poor Pete all the ways that they are going to hurt him in an attempt to get him to surrender himself. Yeah, go figure, hillbilly logic. While the Gogans are in their third verse, they are attacked by an unseen force, which is actually Pete’s invisible dragon Elliot The Gogans are all knocked into the mud, but they eventually move on, leaving Pete and Elliot to get some sleep.

The next morning, we get to see Elliot for the first time in his full two dimensional, Technicolor glory. Elliot, a very unimpressive sight by any post-Jurassic Park standard, is making Pete a breakfast of flaming apples. The duo then makes their way onto the next town, a charming little burg by the name of Passamaquoddy. Pete makes Elliot turn invisible, as to not drive up the budget on this Disney opus. They were known for making movies on the cheap in the 70’s.

Unfortunately, Elliot is the size of a Mack truck, and can’t help but cause chaos when walking down the crowded streets of the sea town. The most egregious problem that Elliot creates is showing his true self to the town drunk, Lampie. (Ah, the 70’s. When alcoholism was funny.) Lampie, playing a blue collar Arthur Bach, runs back into the bar, and tries to convince the patrons that there is a dragon in town. Needless to say, they don’t believe him, but they do break out into song and spill beer all over the place.

Elliot and Pete run out of town, and hide in a cave near the sea. Lampie’s daughter, Nora, sees Pete and only Pete, go into the cave, and invites him to stay in her lighthouse with Lampie. Pete dumps all his emotional baggage on Nora, who tells him that he can stay with her permanently rather than go back to the Gogans.

Nora then attempts to one up Pete by dumping her woes on the orphan. Apparently, Nora’s fiancé, Paul, has disappeared at sea, and Nora is still holding her candle on the water for him. Pete says he will ask Elliot to help, and Nora humors the poor boy with agreement because he is an orphan after all.

The next morning, Dr. Terminus, a medicine showman, and his shill, Hoagy, return to Passamaquoddy after escaping their last port of call. They literally do a song and dance to win the angry towns people over. Around the same time, the fisherman begin complaining about the scarcity of the fish in the sea. And instead of falling for those red hearing excuses of global warming or over fishing, they narrow in on the true culprit. Pete coming to town and talking about a dragon. Nora reminds them the fishing grounds shift, and that Pete should be welcomed in town.

Nora takes him to school, and shows Pete how good people deal with problems by lying to the teacher to get him in. Pete gets into school, but draws the wrath of the teacher who punishes him by beating him with a stick, which would be considered child abuse in modern times. Elliot destroys the school to help Pete, who scolds his dragon and sends him away.

Dr. Terminus, always looking for a new recipe for his quack medicines, is convinced there is dragon based on the damage to the school, and tries to buy the dragon off Pete. After Pete rejects the shyster’s offer, Terminus joins forces with the newly arrived Gogans and unhappy fisherman to try to catch Elliot.

The climax of the film comes during a stormy night. Terminus lures Pete into town under the pretense that Elliot is smashing up the town. Once there, the Gogans capture the orphan, and Hoagy is sent out to retrieve Elliot so that Terminus may kill him with a harpoon. Elliot charges into town and is captured by the fishermans’ nets.

The dragon is able to escape, and saves Pete and sends the Gogans back to their swamp home. Terminus harpoons himself to a telephone pole after making one last attempt to kill Elliot. Elliot destroys Terminus’ wind wagon, and saves Mr. Magoo and some other town residents from a collapsing utility pole.

Meanwhile, a ship out a sea is coming dangerously close to rocks, and Nora and Lampie can’t get the lighthouse’s light to work. Elliot shows up, and gets the light lit with his fire belly. Nora sees Elliot, and is now on board with everyone that Elliot does exist.

The next morning, the townsfolk praise a once again invisible Elliott for his help, and Nora reunites with Paul, who was on the ship that Elliot saved the night before. Paul reveals that he was in a shipwreck and suffered amnesia, but after his bed was turned over and he hit his head again, he remembered Nora. Only in a Disney movie is massive head trauma cured by more massive head trauma.

Now that Pete is safe and has a loving family, Elliott reveals that he is kicking the ginger to the curb and moving on. A player’s got to play, and Elliot has to find another kid in trouble. He says goodbye to Pete and happily flies away with Pete happily reminding him to stay invisible.