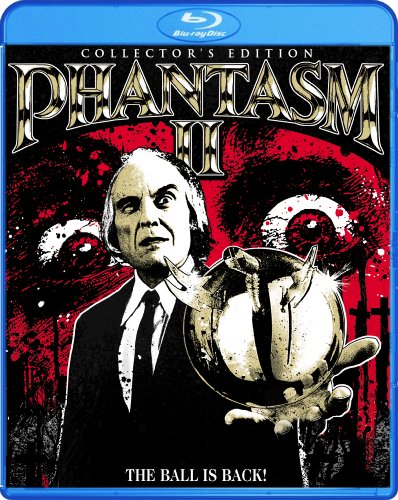 Shout Factory has announced that they are bringing the horror classic Phantasm II to Blu-ray this March.  The film was written and directed by Don Coscarelli and stars James LeGros, Reggie Bannister, Angus Scrimm, and Paula Irvine. Phantasm II will be available for purchase in stores on March 26, 2013.

In this sequel to Phantasm, Mike (LeGros) is released from psychiatry, when he agrees with the doctors that the terrible happenings in his past were just in his imagination.  But once he’s free, he contacts Redge (Bannister) and they team up to hunt down and eliminate the “Tall Man” (Scrimm), who plunders the graveyards and abducts the sleeping with help of his terrible gnomes.  A beautiful strange girl starts to appear in Mike’s dreams.  He assumes she’s in danger and needs their help – will they find her before the Tall Man can do her any harm…?

Phantasm II was released by Universal Pictures in July of 1988.  The film grossed over $7 million at the box office.  It was followed by the sequels Phantasm III: Lord of the Dead and Phantasm IV: Oblivion.