In Phantom of the Paradise, the evil record tycoon, Swan, sold his soul to the devil for eternal youth and success. Currently, Swan’s scheming to steal composer Winslow Leach’s singer Phoenix and her music. While trying to stop Swan, Leach finds himself framed and convicted for drug dealing. Then, a freak accident leaves him horribly disfigured, and he must take refuge at his gigantic rock palace called Paradise. Now, Leach keeps his mangled face behind a gruesome mask while he plans his revenge on Swan…and everyone else who has hurt him over the years. 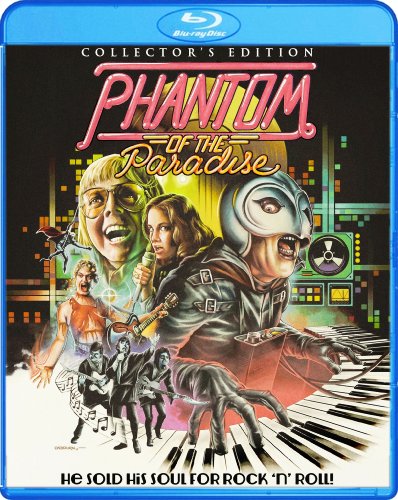 ‘Phantom of the Paradise’ Movie Summary 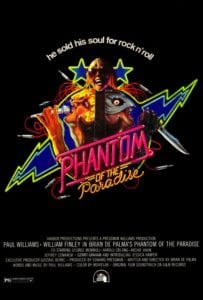 When pianist-composer Winslow Leach (William Finley) signs with Swan Records, he might as well be making a deal with the devil… Actually, he is making a deal with the devil. Brian de Palma’s musical mash-up of Phantom of the Opera, The Portrait of Dorian Gray and Faust begins with a showcase for Swan Records. After a deceptively bopping nostalgia number performed by ‘the Juicy Fruits,’ Winslow performs an original composition (“Faust”), attracting the notice of the as yet unseen record producer Swan (Paul Williams).

The mysterious gloved figure declares that he has finally found the music to open the Paradise, an amphitheater that will be “his own Disneyland.” Swan wants the music, not the man who wrote it, and so sends his flunky Philbin (George Memmoli) to snatch Winslow’s entire cantata – with a promise that they’ll “get right back to him” about becoming a star.

After a month’s silence, Winslow makes inquiries at Swan Records, only to be thrown out by two goons. He resorts at last to sneaking into Swan’s gothic manor house, Swanedge, where girls are singing his song in an audition. A soulful singer named Phoenix (Jessica Harper) catches his attention, and Winslow shares an intimate moment with her before she’s forced to run from the prostituting audition. Winslow makes one last attempt at reaching Swan and is thrown out of the mansion, where two police officers conspicuously plant cocaine in his purse. Winslow is sentenced to life imprisonment at Sing Sing, where his teeth are removed and replaced with metal ones – a dental experiment funded by the Swan Foundation.

After hearing his song on the radio – “the Juicy Fruit’s ‘Faust’,” Winslow assaults a prison guard and escapes in a toy delivery box. When the truck reaches Swan Records, Winslow rampages through the building and destroys every “Faust” record he can. Then, at a guard’s approach, Winslow’s prison uniform catches on a switch for the record press. The switch is pulled as Winslow slips, falling into the press and scorching his face with stomach-churning sizzle. Winslow crawls doggedly out of Swan Records and into the relieving river; meanwhile, “drug-pushing composer” Winslow Leach is declared dead by gunshot.

Later, at the Paradise prepares for opening night, Winslow appears at the venue seeking revenge. Concealing himself in a getup from the costume department, Winslow places a bomb in the Juicy Fruits’ prop car and destroys their “Faust” rehearsal. Swan quickly recovers from the incident, approaches Winslow and offers him a gratifying deal: Winslow can write his cantata as he wishes it to be played and, in return, will stop terrorizing the Paradise. Winslow signs Swan’s massive contract – in blood – and the two are “in business together…forever.”

Phoenix appears at a new “Faust” audition, prompting Winslow to select her as the new voice for his work. Swan agrees and equips Winslow with a voice box, an attachment to his chest that transforms Winslow’s animalistic whines into an electronic snarl that can be captured and manipulated for recordings – a gothic tribute to autotune. Winslow rewrites and records his cantata, with the image of Phoenix as his constant muse.

Swan, meanwhile, places Phoenix in the chorus. Her voice is too perfect, and he despises perfection in anyone but himself. Swan selects a glam rocker named Beef (Gerrit Graham), who proves himself a screaming prima donna that will surely bring in crowds. While fueling Winslow’s creativity with false updates on Phoenix and drugs for breakfast, Swan snatches the completed cantata and seals Winslow in the sound booth behind a wall of bricks.

Winslow discovers Swan’s treachery and destroys the brick wall with the force of his rage. Appearing in front of the dressing room shower, Winslow threatens Beef: “My music is for Phoenix. Only she can sing it. Anyone else that tries dies.” But Beef’s fears are disregarded by Philbin and the ‘Screaming Mimi’ gets fried on stage. Phoenix is ordered to go on before anyone else is killed. She sings under a lone spotlight manned by Winslow and the crowd is immediately enraptured. After the performance, Winslow steals Phoenix away from her adoring fans and reveals his identity, warning Phoenix that Swan will destroy her. Phoenix refuses to believe him, promising to give Swan everything he wants in return for her newfound fame. She fulfills her promise at Swanedge, where Winslow spies her making love to Swan. With a mournful scream, Winslow stabs himself with a dagger and collapses. Swan finds Winslow unconscious and easily pulls the dagger out of his chest. Winslow’s suicide is impossible because his ‘contract,’ “ends with Swan.” When Winslow aims his dagger at Swan, he is impenetrable; Swan is “under contract, too.”

Winslow returns to the Paradise and discovers Swan’s secret room, where video recordings of Swan’s life are kept. A recording labelled “contract” depicts a young Swan attempting suicide, only to be stopped by the appearance of the Devil in his mirror. Young Swan signs a contract that will keep him young and beautiful forever, so long as he records and watches footage of himself every day to remind himself of his good fortune. He must also protect the footage at all costs because, as the Devil tells him, “When it goes, you go.” Winslow also sees footage of a stoned Phoenix signing a contract that binds her to Swan “till death do us part.” He sets the film room ablaze and runs to Phoenix’s rescue.

On stage at the Paradise, Swan and Phoenix are performing and broadcasting an ending for “Faust”, in which Philbin is the priest officiating their union. A gunman hired by Swan stands in the wings, ready to shoot Phoenix the moment she vows “till death do us part” – giving Swan rights to her voice as well as the audience attracting fervor of a live assassination. Winslow struggles with the assassin, shooting Philbin, then swings across the stage and removes Swan’s mask, revealing a monstrously deformed face. The burning of Swan’s film has ended his contract, destroying him and reopening Winslow’s wound. Phoenix sees that the ‘Phantom’ truly is Winslow as he dies reaching out to her. Phoenix holds him and weeps, while the surrounding crowd dances wildly.