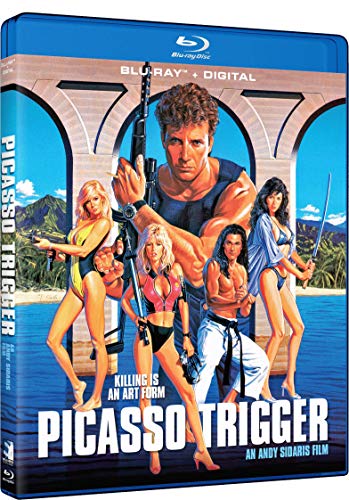 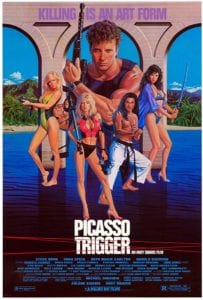 Picasso Trigger begins in Paris, during an opening exhibition of a Picasso Yellow-margin Triggerfish painting. There, shadowy men, assassinate businessman, Alejandro Felipe Salazar who is also an underworld kingpin known as Picasso Trigger.

Cut to a conversation where Dallas oilman L.G. Abilene (played by a Jerry Lawler impersonator) calls his nephew Travis Abilene long distance on the Malibu Express in Honolulu, Hawaii. He informs Travis that Picasso Trigger is dead with no known suspects.

Meanwhile, in Las Vegas at the Greenhorn Club in the Sands Casino, agents from the government’s L.E.T.H.A.L. Agency keep an eye on Mr. Schiavo, and his man, Glen keeps an eye on them. The agents take the back roads to Palm Springs where Glen catches up to them in a helicopter, and blow them up with a bazooka.

We switch to Edy’s restaurant on Molokai, Hawaii, where Miguel Ortiz leaves from dinner after watching two more L.E.T.H.A.L. agents eating dinner there. He has Hondo and Clayton kill them on the beach. The next morning, L.E.T.H.A.L. agents, Donna and Taryn, wake on a boat, shower gratuitously, and head to the beach. Ortiz orders Hondo and Clayton to blow up the girl’s boat; thinking they are on it. Back in Texas, Ortiz’s men also blow up L.G. Abilene’s jeep and his ranch hand in an effort to kill L.G.

You see, Miguel Ortiz leads a ruthless crime ring, and has a grudge against the L.E.T.H.A.L. Agency because he holds them responsible for the death of his brother.

L.G. orders Travis to meet Agent Pantera who was close to Salazar. Donna and Taryn’s vacation is cut short, and they hitch a ride with Jerry Jones back to a train station. They then get in touch with Jade in Honolulu, Hawaii for a bit of bad acting.

Meanwhile, Travis speeds in a red Ferarri to meet the sultry Pantera in Dallas, Texas where we learn the two have a history dating back to high school. They head over to Cowboy’s Club and Restaurant for a bit of two-stepping and talking about old times. They never talk about Salazar though; just some idle chit chat about the good old days before heading back to the compound to butter each other’s biscuits.

The next day, they head to Big Pines Lodge where they meet with L.G. Ortiz’s men are there watching them, so Travis and L.G. take off in a boat, and Ortiz’s men take chase. A balls-to-the-wall aquatic chase ensues. Travis can’t shoot straight, and misses about 20 times. So, Pantera gets on a barge, and shoots one dead. L.G. takes out the other one. Finally, an Abilene who doesn’t shoot blanks.

THURSDAY! at the Sands Casino in beautiful Las Vegas, Nevada, Travis assembles a marvelous team to take out Ortiz with their killer acting skills, but the meeting gets off to a bad start when Donna’s coat gets stuck in the door. In a quick recap, Pantera reveals that she believes Ortiz ordered Salazar’s murder to get control of the syndicate that he controlled.

The next phase of Ortiz’s plan is to kill all the witnesses to the crime. That’s where the L.E.T.H.A.L. Agency comes in. They are going to serve and protect those witnesses. We get a slideshow of the gang members they need to take out, and a warning to expect the worst.

Back at the hotel room, Donna is jealous of Pantera, so she strips naked, and bangs Travis.

FRIDAY! we are back in Honolulu, and Taryn heads back to Molokai to see Jimmy John’s 9-iron. Donna and Travis join the mile high club in a private jet to Molokai, but then while looking over some photos of Salazar, he discovers Salazar might still be alive, and the dead man is a body double. The two land, and meet with the Professor who gives them explosive gadgets to save the day.

SATURDAY! everyone stakes out their opponents. Donna and Taryn stalk their prey on the beach. Jade and Edy pose as workers at the phone company, and say they will need to come back tomorrow to service them. Kym and Patticakes are at the Greenhorn Club, and they set up a date to show Schiavo, Glen, and Patterson their elite skills.

SUNDAY! Donna and Taryn hop onto some motorcycles, and head to the beach. Kym and Patticakes give Ortiz and his men a private show, and Jade and Edy arrive at the building to service some phones.

Jade tries to arrest the men, but a fight breaks out. Jade pokes one man’s eyes out, and Edy kicks the other’s balls out.

Kym and Patticakes get in a shootout with Schiavo and his henchmen. They manage to kill Schiavo and Patterson, but Kym takes some hot lead to the eye in the process. Glen is unwounded, and he attacks Patticakes, but Juan comes out, and beats that little man down.

Jade and Toshi Lum have a final fight in the office, and Jade tosses him out a window…the second body in as many movies to fall out that same window. Mr. Poked Out Eyes starts shooting everything he can’t see, and Edy shoots him with a shotgun.

Donna and Taryn show up at the beach where Hondo and Clayton recognize them as the girls they were supposed to have killed on the boat. A motorcycle chase ensues, but the girls shoot Clayton, and blow up Hondo with the Professor’s boomerang.

They then go after Ortiz and his two bodyguards on the beach. Upon hearing a radio report about Schiavo’s death in Las Vegas, Ortiz hightails it back to his house, and orders his men to get their guns. Taryn takes the Professor’s radio-controlled car full of explosives, and drives it into Ortiz’s house where it blows up. She then shoots two of Ortiz’s men before being shot in the chest herself. She’s okay though. Silicone saves the day.

Donna gets in a gunfight with Ortiz himself. She spears his motorcycle with an arrow full of explosives, and it blows him and his motorcycle to pieces.

That means all the bad guys are dead, right? Cut to an emergency call from L.G. in Dallas to Donna. He’s learned that Salazar is really alive.

Now, cut to a house in Honolulu where Travis rides up in a motorcycle wearing a cast and carrying a crutch. He tells Pantera it tis but a scratch, and tells her to wait outside the house. He kisses her goodbye and heads in. There, he finds Salazar alive and well…and expecting him. Salazar leaves before Travis can shoot him, and then Pantera shows up, but to stab Travis in the back. Donna harpoons Pantera before she can kill him.

Then, she and Travis chase Salazar through paradise, but Travis can’t shoot, so Salazar escapes on a hovercraft. Travis takes chase on a jet ski, and tries to shoot him again…but he can’t shoot! So Donna must harpoon him from the beach with more explosives. He and the hovercraft blow up, but did they get the real Salazar?

Nope! Salazar is still alive and well at the house. Travis has one last rocket up his sleeve, and he uses it to blow up Salazar.

There’s one more cut scene to Edy’s Restaurant on Molokai, and the whole gang is there to share some champagne wishes and caviar dreams for a happy ending.