In Pinocchio, Geppetto is a lonely woodcarver who longs for a child. One night, a Blue Fairy partially grants his wish when she brings his wooden marionette named Pinocchio to life. In order to become a real boy, Pinocchio must prove himself worthy. He sets out into the world, with Jiminy Cricket acting as his conscience. However, a wicked fox named J. Worthington Fowlfellow soon leads Pinocchio astray; first to a life in the theater in Stromboli’s puppet show, and then to Pleasure Island. The boys boys behave like jackasses before transforming into one like Donkey from Shrek. It’s only after Pinocchio saves Geppetto from a whale’s belly that he proves himself worthy to be a real little boy. 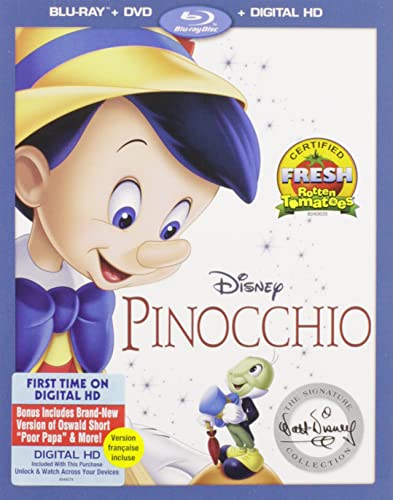 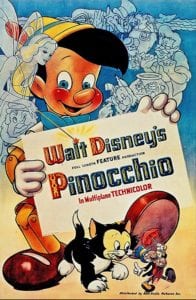 In 1940’s Pinocchio, Jiminy Cricket is the narrator and conscience of the film which tells us the story of Geppetto; a man who makes a wooden marionette named Pinocchio in his workshop.

The night Pinocchio is finished, Geppetto wishes upon a star for Pinocchio to be a real little boy. As he sleeps, a Blue Fairy flies down from the stars, and grants Geppetto’s wish.

With one turn of her wand, Pinocchio comes to life, but he is still wooden. If Pinocchio proves himself brave, truthful, and unselfish, she will make him a real boy. Jiminy is tasked as his conscience, and gets a gold medal if he does a good job.

After the fairy leaves, Pinocchio falls to the ground; making a commotion that wakes Geppetto. Upon discovering Pinocchio, Geppetto jumps for joy; realizing that his wish has come true.

The next day, Geppetto sends Pinocchio to school, but he never makes it there. Honest John and Gideon manage to convince Pinocchio to ditch school for the life as a famous actor in Stromboli’s puppet show. Not even a warning from his conscience, Jiminy Cricket, sways him from going with the sly fox.

Pinocchio’s opening night is a success, but when Pinocchio wants to go home, Stromboli locks him in a birdcage. Jiminy shows up, but he’s unable to free the boy.

Once again, the Blue Fairy flies in from the heavens, and asks Pinocchio why he didn’t go to school. Jiminy wants Pinocchio to tell the truth, but instead he tells lie after lie. With each one he says, Pinocchio’s nose grows longer and longer. The Blue Fairy gives Pinocchio one last chance to prove himself, and she frees him from both the birdcage, and his excessively long schnoz.

In another part of town, a shady man hires Honest John and Gideon to find him foolish little boys to take to Pleasure Island. They once again meet up with Pinocchio, and convince him to take a little vacation on Pleasure Island.

On the short trip to the boat, Pinocchio meets Lampwick; a true delinquent child. The two buddy around the island; smoking, drinking, gambling, and vandalizing everything. Jiminy does his best to save Pinocchio, but when Pinocchio chooses Lampwick over him, Jiminy decides to go home.

On his way out, Jiminy discovers Pleasure Island’s dark secret; the little boys physically transform into the jackasses they make themselves into, and then they are sold into slavery.

Jiminy hightails it back to Pinocchio, and he’s almost too late. Lampwick is already a donkey, and Pinocchio has donkey ears, a tail, and donkey laugh. They manage to escape, and make it back to Geppetto’s workshop, but it’s empty.

The Blue Fairy sends Pinocchio a message that a giant whale named Monstro swallowed Geppetto while he searched for Pinocchio. He couldn’t escape, and was now living in Monstro’s belly.

Pinocchio sets out to save his dad. He and Jiminy jump into the sea, and track down Monstro. As he finds Monstro, the mighty whale swallows him with a school of fish. Reunited with Geppetto, Pinocchio set’s Geppetto’s ship on fire; causing Monstro to sneeze them out.

The plan works, and everyone escapes, but Monstro is a bit annoyed, and he smashes the tiny raft they use to escape. They manage to swim through a small opening that leads to a cave and safety. Geppetto and Jiminy are okay, but Pinocchio lies facedown in a tide pool; motionless.

Thinking Pinocchio is dead, they take Pinocchio home. The Blue Fairy shows up, and because Pinocchio proved himself through his selfless act, she grants him his true wish. With a wave of her wand, Pinocchio is transformed into a little boy. Geppetto once again jumps for joy in celebration. When Jiminy goes to thank the Blue Fairy, she gives him a gold badge for a job well done.