Neal Page is an uptight advertising executive trying to get home to Chicago for Thanksgiving. When his flight is rerouted to Wichita, he reluctantly partners with Del Griffith, an obnoxious yet loveable salesman. Together, they embark on a cross-country adventure that includes various modes of transportation, hilarious mishaps, and unforgettable rental car shenanigans. 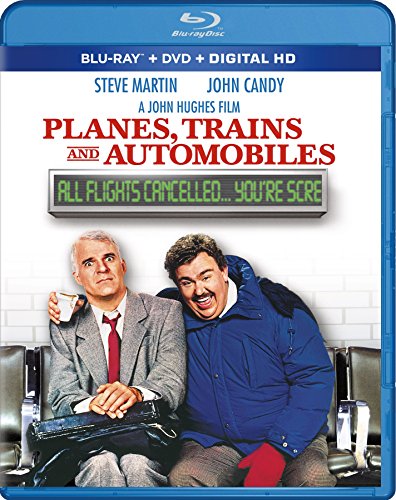 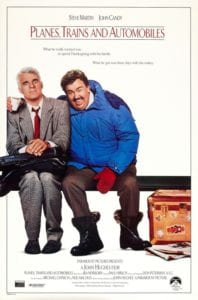 Planes, Trains & Automobiles begins two days before Thanksgiving, and ad executive Neal Page desperately wants to get out of New York City. Neal’s ice queen wife is expecting him to catch his 6PM flight back to Chicago and be home, safely, by 10PM. After Neal loses out on a taxi cab to a Kevin Bacon doppelgänger, he has another cab stolen by former Wally World security guard, Del Griffith. Neal eventually meets Del face to face in La Guardia airport while waiting for their flight to Chicago.

When Neal’s first class ticket is downgraded to the coach section of the plane, he is punished by being forced to sit next to his new acquaintance, Del Griffith. During the flight, Del stops talking just long enough to take his shoes and socks off, making Neal nauseous. If Neal’s flight wasn’t bad enough, the plane is rerouted, mid-flight, to Wichita, KS, after a major snowstorm blankets Chicago.

Del, who is “a million bucks shy of being a millionaire,” uses his influence as a shower curtain ring salesman, to get the duo the last motel room in all of Wichita. When the twosome gets to their room, they learn they must share a double bed, which Del immediately spills beer all over. While Neal tries to sleep, Del clears out his sinuses by making loud snorting sounds. An irritated Neal screams at Del, calling him a total loser and a “Chatty Kathy doll.”

A very hurt Del expresses to Neal that he likes himself and won’t change because he is “real.” After they calm down, the duo are able to get a good night’s sleep. Neal and Del wake up the next morning spooning, with Del kissing Neal’s ear and his hand placed between two pillows. But those aren’t pillows!!!!!

While Neal and Del were sleeping in their affectionate embrace, a former SUMMER SCHOOL student named “Dave,” broke into their motel room and stole all of their cash. The duo must resort to using Neal’s credit card to secure train tickets to Chicago. Unfortunately, the train blows its engine, forcing all of the passengers to evacuate the passenger cars and walk through muddy fields to the nearest highway and commercial buses. The pair decides to stick with the bus line and purchased tickets to St. Louis, Del makes the most of the trip by leading the passengers in a stirring rendition of “The Flintstones Theme.” WILMA!!!!

A penniless Del cons rubes throughout the St. Louis bus station into buying his shower curtain rings, telling them the curtain holders are actually fashionable earrings. The money he collects buys his transportation to Chicago. Neal decides to go his own way and drive a rental car from St. Louis to Chicago. When Neal learns his rental car doesn’t exist, he has a very Steve Martin like dance of rage, destroys his rental agreement, and is told he’s “fucked” by Principal Ed Rooney’s secretary. Fortunately for Neal, Del pulls up in a rented Family Truckster Convertible, and they drive off to Chicago.

After Del inadvertently takes an exit ramp to prevent one car crash, he uses the same exit ramp to reenter the interstate and drives the wrong way down the one way lane. Del miraculously squeezes between two semis in order to save their lives, but later catches the Truckster on fire when his lit cigarette lands in the back seat. While Neal hysterically laughs about the blazing car, Del confesses that he used Neal’s credit card to rent the Truckster and the credit card is now burning up, along with Neal’s wallet, in the car’s glove compartment.

The ice covered duo drive the burnt car to a nearby motel where Miami Vice’s “Izzy Moreno” gives Neal a room for $17 and “very nice watch,” but has nothing for the destitute Del. Neal saves Del from freezing to death in a burnt up car with no roof, no windows, and no doors by allowing him to sleep in the motel room. After a night of drinking and laughing, they decide to drive straight through to Chicago. If matters couldn’t get any worse, Del is pulled over for speeding and the scorched car is impounded by a Michael McKean doppelganger for being undrivable. Neal and Del secure a ride into Chicago from a semi driver, but they have to sit in a refrigerated cargo trailer for the entire trip.

After FINALLY arriving in Chicago, the duo says their “goodbyes” at a CTA station, hug it out, and wish each other a happy Thanksgiving. While riding home on the train, Neal realizes that Del provided him with ambiguous details about his life and retreats back to the train station to find Del. Del informs Neal that he doesn’t have a home to go to and his wife, the love of his life, has been dead for 8 years. A very compassionate Neal takes Del home to have Thanksgiving dinner with his family. After two days of hell, Neal rings his own doorbell, introduces Del to his family and brings a giant smile to Del’s face by making him a part of the very loving Page family.