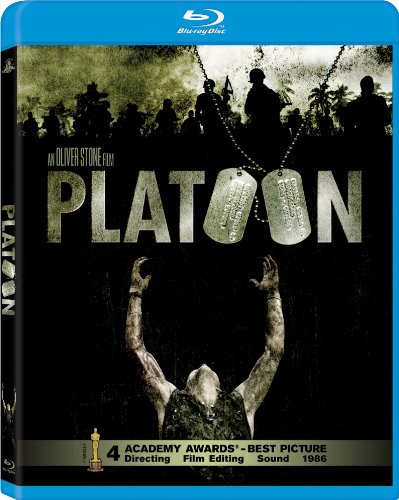 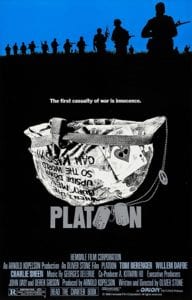 Chris Taylor is a volunteer for the U.S. Army in 1967, the midst of the Vietnam War. He is assigned to a platoon led by an inexperienced officer, Lieutenant Wolfe. However, the real leaders of this platoon are two enlisted men, Staff Sergeant Barnes and Sergeant Elias. Sergeant Barnes is a hard and stern man with extensive combat experience. Sergeant Elias is a kind and idealistic soldier. Each has a group of loyal followers.

Taylor is wounded soon after arriving in a night ambush. He spends some time smoking weed and bonding with Sergeant Elias while after returning from the hospital. Taylor stays clear of Sergeant Barnes and his crew.

Later, when the men are patrolling, they are harassed by Vietnamese fighters and lose several men. When they reach a remote village, things get ugly. Barnes interrogates the village chief, murdering his wife in cold blood and threatening his daughter in an attempt to extract information from the chief. Barnes intervenes. Ultimately, the village is razed amid rape and destruction before the platoon leaves.

Upon returning to base, Captain Harris threatens a court martial if evidence is produced that an illegal killing took place at the village. Soon thereafter, the men are ambushed on patrol again. Elias takes a couple of men in order to try and hold of flanking attackers. Barnes orders the rest of the men to retreat and runs off to find Elias and his men. Barnes finds Elias alone and shoots him several times in the jungle.

Barnes tells Taylor that Elias was killed by the Vietnamese, and they are rescued by helicopter. As they helicopters take off, emerges from the tree line, wounded and chased by their opposition. Elias chases after them, but everyone watches helplessly as he is gunned down by the Vietnamese army as he reaches out for help.

Back at the base, Taylor tries to talk some men into killing Barnes as retribution for Elias, but Barnes walks in on them challenges Taylor to a fight, which Barnes easily wins. Barnes cuts Taylor’s face and leaves him.

Not too long later, the platoon is sent back to the front to maintain a defense position. The Vietnamese launch a major assault, and the defensive line is broken. All hell brakes loose, and most of the platoon dies in the attack. Captain Harris orders an air attack inside his own perimeter. In all of the hectic fighting, Taylor comes face to face with Barnes, and Barnes moves to kill Taylor just as the air strike hits and knocks Barnes and Taylor apart.

Taylor comes to after the fighting has stopped and the sky is light. He finds Barnes badly wounded. Barnes tells Taylor to find him a medic. When Taylor won’t help him, Barnes orders Taylor to kill him. Taylor shoots Barnes dead. Now having been twice wounded, Taylor is loaded onto a helicopter to return home. As Taylor flies away, he weeps at the sight of craters filled with bodies of dead soldiers.