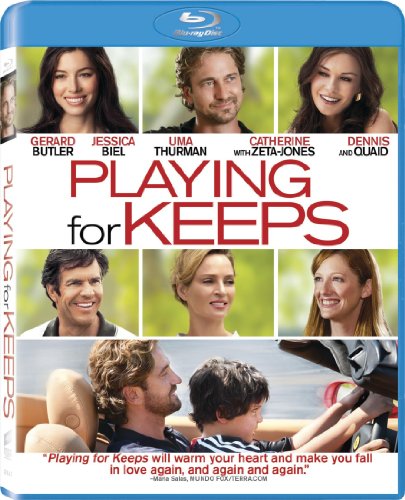 Sony Pictures Home Entertainment has announced that it will release Playing for Keeps on Blu-ray this March. The film is directed by Gabriele Muccino and stars Gerard Butler, Jessica Biel, Uma Thurman, Catherine Zeta-Jones, Judy Greer, and Dennis Quaid. Playing For Keeps will be available for purchase online and in stores across the nation on March 5, 2013.

Playing for Keeps is a romantic comedy about a charming, down-on-his luck former soccer star (Butler) who returns home to put his life back together. Looking for a way to rebuild his relationship with his son, he gets roped into coaching the boys’ soccer team. But his attempts to finally become an “adult” are met with hilarious challenges from the attractive “soccer moms” who pursue him at every turn.

The film was released in December of 2012 and has grossed over $13 million at the box office to date.

Disclaimer: Affiliate links are contained in this post. This means when you click a link, and purchase an item, Movie House Memories will receive an affiliate commission. Advertisers and Affiliate Partnerships do not influence our content. See our Terms of Use about the inclusion of affiliate links on this site for more information.
February 19, 2013
1 minute read
Show More
Back to top button
Close
Close