Shortly after a young family moves into their new suburban home they begin receiving visits from ghosts. At first, they seem friendly. However, the amusing floating object soon turn nasty when more sinister poltergeists arrive. Once there, they terrorize the family and kidnap the youngest daughter. Now, their only hope is a pint-sized parapsychologist who looks to bring back the little girl before it’s too late! 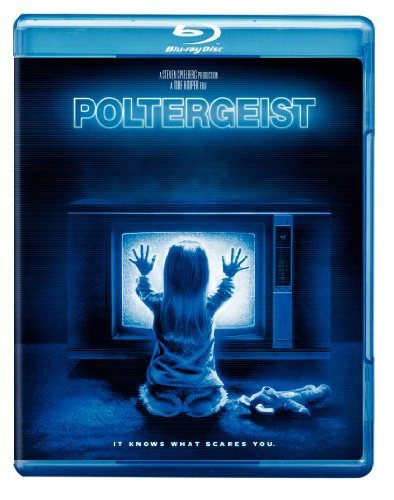 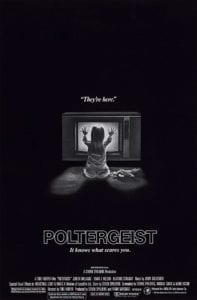 Poltergeist takes place in the cozy suburbs of Cuesta Verde, California. Steve Freeling works for a land developer named Teague as a real estate agent. Steve and his wife, Diane, have also purchased a home there. They live a middle class life with their three adorable children: Dana, Robbie, and Carol Anne.

However, once they move in, odd things begin happening. Something eerily draws Carol Anne to the upstairs TV tuned into static. She has random conversations with unknown entities through it as if someone is talking back to her.

When her pet bird suddenly dies, the family has a small service for it. Then, Carol Anne goes to bed, but something wakes her, and draws her to the TV again. An apparition bursts from its screen, and enters the opposite wall; causing an odd sort of earthquake. This wakes everyone, and when they look at Carol Anne, she looks back at them and eerily says, “They’re here.”

The next day, the odd happenings increases. Glasses break for no reason; forks bend themselves. Diane is a bit freaked out by all this, and she asks Carol Anne if she knows who is doing it. She says it’s the TV people doing it…and not your average cable guy types either.

These ghosts with the mosts seem friendly at first.They stack chairs in funny positions, and pull people across the kitchen floor. You know—fun things. When Steve gets home that night, he doesn’t believe Diane’s stories, so she proves it. Steve gets a bit freaked out. He bans the family from going in the kitchen until he knows what’s happening.

A large thunderstorm rumbles through the valley, and as the rain pours down on them, the large tree outside the Freeling home springs to life. It grabs Robbie through his bedroom window. While Steve and Diane rescue him, the ghosts use the distraction to suck Carol Anne into their dimension through her bedroom closet. Not realizing she’s been taken, the family searches everywhere for her including the pool out back that’s under construction. However, when Robbie hears Carol Anne through the TV, he begins screaming, and the family runs to him. Their baby is gone!

Steve contacts some parapsychologists from UC Irvine to bring Carol Anne back home. The team consists of Dr. Lesh, Ryan, and Marty. They are surprised there is real activity in the house; not their usual bunk they deal with. Steve opens a door to the kid’s playroom where their toys are fly around it to the tune of cackling voices. Their previous experiences pale in comparison to the shit going down at the Freelings’ place. They figure this isn’t a typical haunting, but one where a poltergeist has taken control.

As the three set up camp in the house, they witness more strange things: Carol Anne talking to Diane through the TV, mysterious footsteps, and horrifying hallucinations. Outmatched and under experienced, the group leaves to call in backup. Dana goes to stay with a friend, and Robbie heads to his grandma’s place.

Steve does his best to continue working too. Teague, his boss talks about putting up a new housing division where a cemetery currently exists. He nonchalantly reveals they’ve done it many times before including the division that Steve lives in. In fact, much of Cuesta Verde was built over relocated cemeteries. This realization puts Steve off a bit.

Soon our parapsychologists return with a pint-sized medium named Tangina Barron. She uses her psychic abilities to search the house. She finds that Carol Anne is still alive and close by. The spirits haunting them are no longer living, but have not gone into the light either. Unfortunately, there is an evil spirit there too, and it wants the spirits to remain lost and confused. It uses Carol Anne to keep them from moving into the light.

Tangina realizes the entrance to that other dimension is through Carol Anne’s bedroom closet. She tests the portal using tennis balls. They fall through the living room ceiling that’s below her closet. In theory, a living person can tie a rope around their waist, and enter it. Then exit through the other side like the tennis balls.

While Tangina plans to go through herself, Diane insists on going instead. They tie the rope around her waist, and she heads into the portal. Tangina gets the spirits away from Carol Anne, and has them head to the real light.

When Steve panics, he pulls on the rope. The demon appears to him, and they meet face to face. Diane falls through the ceiling; holding Carol Anne. Both are covered in ectoplasm. The Ghostbusters will definitely want to check that slime out! Steve puts them in the tub as Tangina declares the house to be clean.

However, this is a false ending. That demon is still there, and it’s going to get its revenge. In what amounts to the Freeling’s last night at the house, Steve leaves Diane with the kids while he goes to meet with Teague. As Robbie and Carol Anne get ready for bed, Robbie’s clown comes alive, and drags him under the bed.

Diane hears his screams from her room, and runs to him, but something pushes her to the wall and up to the ceiling. Robbie tears the clown to pieces, but a portal appears in the closet again, and attempts to suck the two kids into it.

As Diane goes to them, the demon appears in the form of a skeleton. It attacks Diane, and she falls down the stairs. She runs out to get help from her neighbors, but falls into the pool under construction outside. The rain has filled it with water and muck. As Diane tries to climb out, coffins poke out from the mud to reveal decaying corpses.

The commotion alerts her neighbors who arrive to help, but they won’t go in the house. So, Diane runs back in to get the kids alone. As the portal is about to consume them, Diane pulls them out to safety. They flee the home.

More coffins and dead bodies explode from the ground as Steve arrives with Teague. Steve yells at him for only moving the headstones, and not the graves. Furious, he leaves Teague standing there like an idiot.

Dana finally comes back home in time to see the house tearing itself apart. As she screams, Steve tosses the family into the station wagon, and drives away. The house implodes on itself and through the portal as Teague and the neighbors helplessly look on.

The Freelings check into a motel for the night; tossing the television set out of the room for good measure.