As Buddy Red Bow struggles to keep his nation on a Montana Cheyenne Reservation financially solvent and independent, his buddy, Philbert pursues Native American/First Nation wisdom and lore wherever he can find it in order to earn his warrior name. He’s even got his war pony, Protector: a beat-up old wreck. When Buddy’s sister is arrested in Santa Fe, he and Philbert set off on a road trip to look after her kids and go bail her out. However, Bonnie’s arrest has something strange about it as her friend Rabbit points out. As the miles roll by, Philbert’s faith challenges Buddy’s hard-edged view of the world, and together they face the realities and dreams of being Cheyenne in the modern-day US as they fight to free Bonnie and her children. 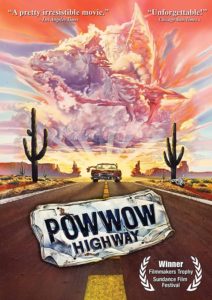 In Lame Deer, Montana, Buddy Red Bow (A Martinez), a member of the Northern Cheyenne tribe tries to persuade the council to vote against a strip-mining project to no avail. That night, Buddy’s very spiritual high school friend, Philbert Bono (Gary Farmer) sees a car commercial at a local bar from a white salesman in a native headrest enticing the locals to find their own pony. Philbert believes this is a sign, and the next day, he visits a junkyard where he trades some marijuana for a war pony of his own. While there, Philbert has a vision of several horses running in his direction. One of them stands out from the others and that vision leads him to his choice of car—a beat up 1964 Buick Wildcat—which he calls Protector. Protector is a pile of junk though and it takes a a number of tries before the car starts.

Out in Santa Fe, New Mexico, Buddy’s estranged sister, Bonnie (Joanelle Romero), finds herself under arrest when the police find drugs in the trunk of her car. It turns out that the greedy developers trying to pass that strip-mining project are responsible for those drugs in her car in an attempt to get Buddy out of town during the council’s vote of their project—which he fervently opposes.

While Buddy doesn’t have a car, he needs to get to Santa Fe ASAP. So he asks Philbert. However, when the two were kids, Buddy bullied Philbert for being fat and an embarrassment. While Buddy’s opinion towards Philbert hasn’t changed, he doesn’t have any other real choice. Philbert happily agrees to help though because they are Cheyenne, but when the time comes for Philbert to pick Buddy up, he’s nowhere to be found. The tribal chief, Chief Joseph (Sam Vlahos), says that Philbert always comes through and will be there if he said he would.

Philbert does arrive and the two head out. However, Buddy has a quick temper and Philbert’s frequent stops to pray and eat irritate him. Buddy is a bit put out when Philbert decides to go on a journey to gather good medicine instead of going directly to Santa Fe.

This leads them to a Pow Wow at Pine Ridge Indian Reservation where Buddy dances with other Vietnam Veterans. They will then visit the sacred Black Hills in South Dakota where Philbert leaves a giant Hershey’s chocolate bar as an offering to his ancestors. As the trip progresses, the two men bond and gain respect for one another.

Back in Santa Fe, Bonnie’s children ask her best friend, Rabbit (Amanda Wyss), to help pay for the $2000 bail. While she agrees, authorities cannot process the bail until after the holidays—which plays in the developer’s favor.

Finally, Buddy and Philbert arrive in Santa Fe. They find Rabbit before heading to the police station to cause a scene. As Rabbit and Buddy keep the officer’s full attention, Philbert takes $4000 in cash from one of the nearby open rooms. The three leave the station and head to a bar to have a drink. While Rabbit and Buddy flirt with one another, Philbert goes to get Bonnie’s kids at the nearby hotel. They then head to the police station without telling Buddy and Rabbit.

By now, Chief Joseph has arrived to talk to Bonnie, and as he waits, he spots Philbert outside the window. Apparently, a scene out of an old western has inspired Philbert to break Bonnie out of jail using Protector and a rope to yank the jail bars off the building. In the commotion, as the police head out to arrest Philbert, Chief Joseph quietly leaves in his truck.

During the ensuing chase, Philbert picks up Buddy and they head out of town. Unfortunately, Protector’s breaks go out on a downhill road. Everyone jumps out of the car except for Philbert who appears to die in the wreck. When the police catch up, they see the car in flames and satisfied, leave the scene.

As Buddy, Rabbit, Bonnie, and her kids mourn Philbert’s death, he reappears unharmed and there is a big group hug. The group heads down the highway where Chief Joseph arrives—after following the chase himself—to give them a ride home… hopefully in time to vote against the strip-mining project.