Jessica Riggs and her family have come into hard times. Her father, John, is struggling to make ends meet and is considering sending Jessica away to live with her aunt. Jessica is a strong believer in all things Santa Claus, and when she finds a mysterious reindeer in the forest, she believes that it maybe the elusive Prancer, one of Santa’s reindeer. She decides to take care of Prancer, but keeps it hidden from her father. However, when Jessica’s belief in the identity of Prancer becomes a new story, Jwessica and her family are suddenly dealing with a lot of unwanted attention. The question still remains, how will Jessica get Prancer back to Santa Claus by Christmas Eve? 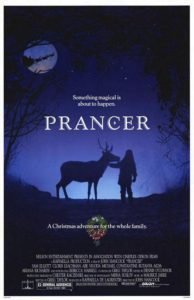 Jessica Riggs (Rebecca Harrell) is an 8-year-old being raised by her widowed father, John (Sam Elliott), and her older brother, Steve (John Joseph Duda). They live on an apple farm that has fallen on hard times. John has been struggling financially and has been forced to rely on the help of his sister-in-law Sarah (Rutanya Alda). John is possibly facing foreclosure on the farm.

One day, Jessica is walking home from a school after a Christmas pageant. She witnesses a plastic reindeer fall from a Christmas decoration hung above the Main Street in the town. She concludes to herself that it was Prancer from the order given in the poem “A Visit from St. Nicholas”, otherwise known as “The Night Before Christmas”.

Meanwhile, John is afraid that he won’t be able to provide for his kids, specifically Jessica. He discusses a plan with Sarah where she would take Jessica in temporarily. Jessica overhears a portion of the conversation, but does not hear the whole discussion. Later, Jessica and her best friend, Carol Wetherby (Ariana Richards), go sledding and accidentally knock down some flowers at a house owned by a widow named Mrs. McFarland (Cloris Leachman). After sledding, Jessica walks home and finds a live reindeer in the woods. The reindeer runs away into the darkness.

The next day, Jessica is walking home from school and discovers reindeer tracks and follows them into the woods. She is startled by a gunshot, but continues following the tracks. John becomes concerned for his daughter and goes out looking for her. He eventually finds her, but almost hits the reindeer which was now standing in the road. John notices that the reindeer is wounded and decides to put the animal down with his rifle. Jessica pleads with her father not to shoot the reindeer, and during their argument, the reindeer disappears.

Later, Jessica is having a dream about Prancer when she is startled awake by the scene of the plastic reindeer falling over Main Street earlier. She hears a noise outside and sees the window to the barn is open. She goes to investigate and finds the wounded reindeer is now inside with the family’s other animals. Afraid that her father may still put the animal down, she moves the reindeer to a shed. Jessica believes that the reindeer is the real Prancer and decides to nurse him back to health. She calls a veterinarian, Dr. Orel Benton (Abe Vigoda) who is reluctant to help, but eventually comes to the farm to anyways and treats the animal.

Sometime later, Jessica goes to visit Santa Claus (Michael Constantine) at the mall. She provides the mall Santa with a Polaroid picture of the reindeer and informs him that she has Prancer. She also gives the mall Santa a letter to give to the real Santa before Christmas Eve. The mall Santa takes the photo and letter to the editor of the local newspaper believing that it will make an interesting story. Meanwhile, Jessica goes to Mrs. McFarland’s house and apologizes for knocking down the flowers. She asks the widow if there are any jobs that she can so that she can earn some money to pay for oats for Prancer. Mrs. McFarland agrees to pay her if she cleans a room in the house. The two become friends over the course of their encounters.

Meanwhile, the newspaper editor is inspired by Jessica’s faith and writes an article that is then read by the local pastor (Walter Charles) during one of his sermons. Jessica realizes that her secret is now out to the entire town. She gets mad at Carol believing that she was the one who told the pastor. She ends her friendship with Carol although she later finds the story in the paper.

At the same time, Prancer inadvertently releases all of the animals out of the barn, and John is forced to round them up. While John is collecting the animals, Prancer gets inside the house and wrecks it. A little while later, John reads the article about Prancer right before a group of townspeople show up at the farm wanting to see the famous Prancer. John grabs his rifle and threatens to shoot the animal. He is stopped by a local butcher who offers to buy Prancer, which grabs John’s attention since the family needs money. Jessica is afraid that the butcher will kill Prancer and sell his meat. She runs away in the night to rescue Prancer. The butcher decides to keep Prancer as a sales tool for his Christmas tree lot. Steve chases after his sister and tells her that he loves her even though they fight. Jessica attempts to open Prancer’s cage but falls, injuring her head.

The injured Jessica is taken home where she stays in her bedroom and becomes despondent. John visits her and she asks him to read her a story. After the story, John tells his daughter that times may continue to be hard for a long time. He tells Jessica that he could bear losing the farm, but he could not bear losing her. John tells his daughter that he will not be sending her to live with Sarah. John suggests that they take Prancer to Antler Ridge, which he believes would be the perfect place for Santa to pick him up.

The townspeople gather around Jessica’s window and begin singing to cheer up the young girl. John and Jessica get Prancer and take him to Antler Ridge. Once there, the elusive reindeer runs out of sight. John and Jessica follow his tracks and notice that they vanish at the end of a cliff. They hear the sound of sleigh bells and see a streak of light rising to meet what is presumably Santa’s sleigh. Jessica says goodbye to Prancer and asks him to remember her. The sleigh flies across the full moon and over the town, making its first stop of the night at the Riggs’ farm.