In Predators, a mercenary named Royce; a military woman named Isabelle; a Russian soldier named Nikolai; a San Quentin criminal named Stans; a Sierra Leone militia member named Mombasa; a drug lord calling himself Cuchillo; a Yakuza named Hanzo; and a doctor named Edwin suddenly awake in free fall from the sky. Each one manages to successfully open their parachutes where they land in a foreign jungle. Soon they learn that they are on another planet, and something on it is hunting them as part of a deadly game. These strangers need to quickly come together if they want to survive these predators. 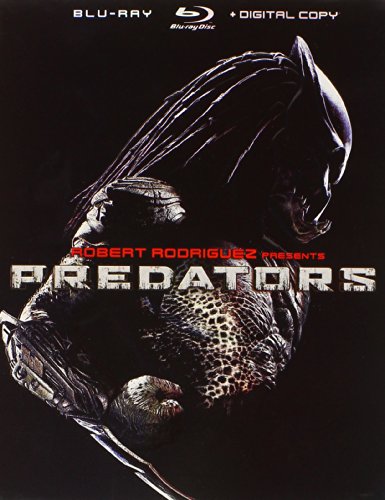 Predators begins when a mercenary named Royce (Adrien Brody) wakes in the middle of ski dive into an unfamiliar jungle. Once he lands on the ground, he encounters several other tough types that also woke in the middle of a parachute jump with no memory of how they got there, including: Cuchillo (Danny Trejo), a Mexican drug cartel member; Nikolai (Oleg Taktarov), a Russian solider; Isabelle (Alice Braga), a Israel Defense Force sniper; Mombasa (Mahershala Ali), a death squad soldier from Sierra Leone; Stans (Walton Goggins), a San Quentin death row inmate; and Hanzo (Louis Ozawa Changchien), a Yakuza enforcer. Seemingly unrelated to his compatriots is Edwin (Topher Grace), a doctor who does not appear to practice in the lethal arts.

Upon landing, they discover that each of them are armed and lethal killers, each with their own dark past, with the obvious exception of Edwin. None of them recognize the jungle they are in. They begin looking for land marks to identify where they are. Once they reach the crest of a hill, they notice that the sky is filled with an alien landscape, leading them to the inescapable conclusion. They are no longer on Earth.

The group begins to search the jungle to find answers as to why they are there, and more importantly, how they can get back home to Earth. Edwin discovers a plant that consists of a neurotoxin that has the ability to paralyze humans. They find empty cages, primitive booby traps, and the corpse of a U.S. Special Forces soldier.

Eventually, a pack of alien beasts attacks the party, and it nearly wipes them out until a whistle suddenly calls them off. Once the group reunites after the attack, Royce informs them that the alien beasts were called back because they had completed their task of flushing them out into open ground to test their abilities. Royce tells them that the planet is a game preserve and they are being hunted.

It is only at that point that the group notices that Cuchillo is missing. They locate him sitting in an open field seemingly crying for help. When Isabelle goes to help him, Royce stops her and tells her that it is a trap. He proves it to her by throwing a rock into the field which is immediately hit by a blade. Isabelle says she can’t leave him out there, and Royce tells her that is on her before leading the rest of the group from the drug cartel member. Isabelle turns and fires a shot to kill the wounded Cuchillo before catching up with the group.

The group follows the tracks of the attacking alien beasts back to the “hunters’” base camp. Once there, they find a captive Predator chained to a tree in the middle of the camp. While in the middle of the camp, three “Super Predators” attack them, and impale Mombasa. The rest of the group manages to escape when they jump off a cliff into a raging river.
Once they make it to shore, Isabelle confronts Royce for using them as bait at the camp, and Royce confronts Isabelle, believing that she knows what is tracking them. Isabelle tells them the details from the first report of a Predator from the only known survivor of an in 1987, Major Alan “Dutch” Schaefer (Arnold Schwarzeneggar).

Soon, a strange alien shape approaches the group. It turns out to be Ronald Noland (Laurence Fishburne), an American solider who has survived on the alien planet for several years. Ronald takes the group back to his hidden lair, and explains how he has killed three predators and survived using some of their technology.

When the group falls asleep, Noland traps them in a room and attempts to suffocate them with smoke in order to acquire their weapons and supplies. Royce uses an explosion to attract the Predators to Noland’s lair. Noland tries to escape from the lair, but one of the Super Predators kills him quite quickly. Nicolai also encounters a Predator, which he kills when he blows himself up with two claymore mines.

The remaining members of the group are able to escape the lair, with a Predator hot on their heels. Stans attacks it with his shiv to buy time for the others to make their escape. However, Stans is himself killed moments later when the largest Predator rips his spine and skull out of his body. The remaining members of the group head for the Predator camp. Hanzo stops along the way and pulls his sword. He engages in a battle of blades with a Predator that ultimately kills both participants.

It’s down to the final three

Royce, Isabelle, and Edwin continue on to the Predators’ camp until Edwin has his leg trapped in a Predator trap. The trap does not kill him, but it maims him enough that he cannot walk, let alone run on his own. Royce suggests that they booby trap him and leave him behind to kill the Predators, but Isabelle says she won’t leave him behind. Royce leaves them and heads to the camp. Isabelle and Edwin, also slowly continue onto to the camp but are captured in a Predator pit.

The good doctor is not what he seems

Meanwhile, back in the pit, Edwin reveals his true nature as a serial killer as he paralyzes Isabelle with the neurotoxin. He tells her of his horrible plans to kill her and remain on the planet with the other “monsters.” Royce appears, having not boarded the ship, and helps the duo out of the pit. When Edwin goes to stab Royce, the mercenary turns the tables and stabs Edwin in the head with the blade, paralyzing the doctor.

Royce then follows his original plan and bobby-traps Edwin with grenades, using him as bait to injure the remaining Predator. Isabelle crawls to her sniper rifle while she fights the effects of the neurotoxin. Royce takes on the last Predator using mud and fire to mask his heat signature. Isabelle is able to shoot the Predator and Royce is able to decapitate the beast.

As Royce and Isabelle lie down in exhaustion, they observe new parachutes opening in the sky. Royce tells Isabelle that more Predators will soon arrive to hunt the new prey. He tells her that they need to find another way to get off the planet, and then they retreat into the jungle to hide and fight for their lives again.