When someone rapes and murders D.A Carolyn Polhemus, her boss assigns his assistant, Rusty Sabich, to handle the investigation. However, Sabich was secretly having an affair with her, and all evidence points to him as the killer. While Sabich suspects his boss’ rival is trying to frame him, he finds himself on trial for murder anyhow. Now Sabich must turn to Sandy Stern, a highly celebrated defense attorney, to save his butt. 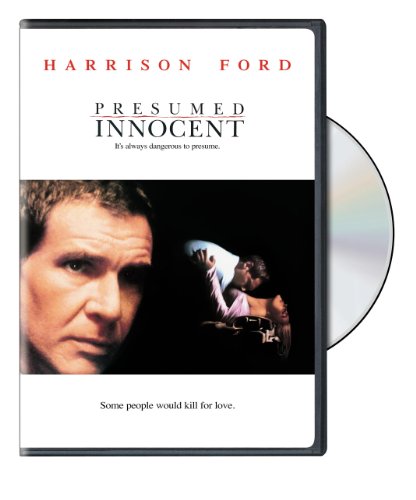 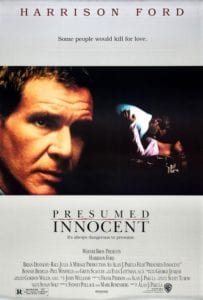 Presumed Innocent tells the story of the murder investigation of assistant district attorney Carolyn Polhemus, played in flash backs by Greta Scacchi. Polhemus is found murdered in her apartment. She has appeared to be tied up, raped, and then bludgeoned to death. The district attorney Raymond Horgan, who is the process of losing an election, puts his best man on the job, Rozat “Rusty” Sabich, played by Han Fucking Solo himself, Harrison Ford.

Rusty doesn’t want the job, and not just because he is the process of looking for a new barber for himself. No, he doesn’t want it because just like every other character in the film, he has slept with the victim previously. However, no one knows that, except for Rusty’s wife. And we are never given the story of how she found that little gem out.

With reluctance, Rusty goes about determining who got the last turn on the town bicycle. They have some good evidence. Polhemus is tied up, so they think it may have been one of the many pervy sex offenders that she prosecuted. They have a beer glass with fingerprints on it. They have dead sperm in her vagina, which in 1990, was pre-DNA so they could only get blood type off it.

They also have her phone records. Because that is how the psycho ex boyfriends stalked you in 1990. No texts, just lots of phone calls. Finally, Rusty has a missing public official bribery case that was assigned to Pohlemus by the DA and looks conspicuous in the victim’s array of sex cases.

While Rusty is working the investigation, Raymond loses the election, and the district attorney elect, Nico Della Guardia and his faithful lap dog Tommy Molto begin to accuse Rusty of committing the murder. They state it is Rusty’s fingerprints on the glass. His blood type matches the semen found in the victim’s vagina, and Rusty has a shocking number of phone calls to the victim’s phone number, including one the night of her murder.

Rusty maintains his innocence, and hires the best defense attorney around, Alejandro “Sandy” Stern, to represent him. Sandy is played to absolute perfection by the late Raul Julia, pre-him doing a series of shit films like The Rookie, Street Fighter, and Addams Family Values.

Rusty is charged, and in typical Hollywood fashion, we move immediately to the trial rather than waiting the more realistic two or three years for an actual trial. Rusty is lucky and draws Judge “Mother-fucker” himself, Larren Lytle. Rusty and Sandy move forward with the defense that someone is trying to frame Rusty for the crime. Rusty’s investigation of the bribery file indicated that prior to her becoming a prosecutor, Polhemus had been the probation officer to a convict that had bribed a public official.

Molto had been the prosecutor on the convict’s case, so Rusty believes that Molto might be framing him to protect his own ass. However, Rusty eventually learns that it was actually Judge Lytle who took the bribe while he was doing Polhemus back in the day.

What follows is some of the best and somewhat accurate legal drama that I have seen on the big screen. Ultimately, Rusty is not convicted, but he is not found not guilty. And we do eventually learn the identity of the real killer. And since we are going to talk about it today anyways, I will ruin this 28-year-old spoiler. It was Rusty’s wife giving the little home wrecker her comeuppance. In the end, you are left wondering, was justice done? And how did Rusty eventually become a judge in one of the later novels?