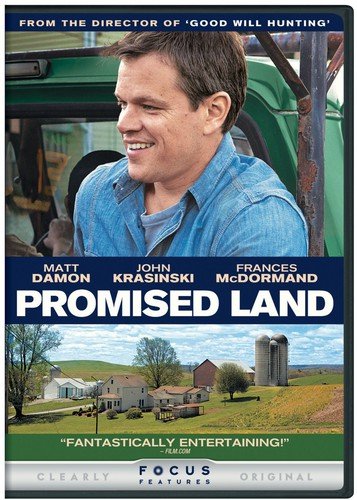 Damon stars as corporate salesman Steve Butler, whose journey from farm boy to big-time player takes an unexpected detour when he lands in the rural town of McKinley with partner Sue Thomason, played by McDormand. There to offer much-needed relief to the economically hard-hit residents, the pair begin strategically obtaining drilling rights to the home owners’ properties. What seems like an easy job for the duo, though, quickly becomes complicated by a respected schoolteacher (Holbrook), a slick environmental activist (Krasinski) and Butler’s interest in a local woman (DeWitt). As they grapple with a surprising array of open hearts and closed doors, the outsiders soon discover the strength of an American small town poised at a crossroads.

Promised Land was released in December of 2013 and grossed over $7 million at the box office.

The Blu-ray/DVD/Ultraviolet Combo Pack will include several special features, including: deleted scenes and The Making of Promised Land featurette.