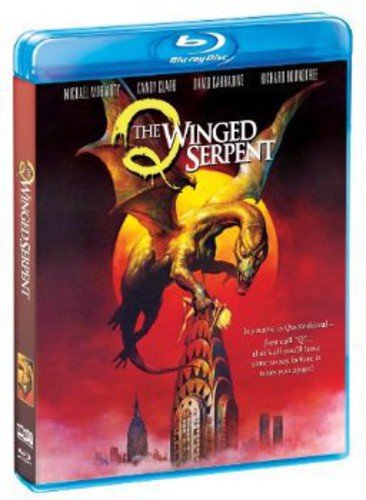 Scream Factory has announced that they are adding Q: The Winged Serpent to their upcoming slate of Blu-ray releases. The film was directed by Larry Cohen and stars Michael Moriarty, Candy Clark, David Carradine, Richard Roundtree, and James Dixon. Q: The Winged Serpent will be available in stores and online August 27, 2013.

Classic cult monster-movie horror. When a number of New Yorkers are brutally decapitated while sunbathing on their tenement building roof, two NYPD detectives are assigned to solve the case. Meanwhile, paranoid jewel thief Jimmy Quinn (Michael Moriarty) flees a botched heist and hides out on the roof of the Chrysler Building, where he unwittingly discovers the nest of the huge dragon-like creature that has been responsible for the deaths. As Quinn bargains with the police for a financial reward for his information about the creature’s nest, a mysterious Aztec cult in the city start making human sacrifices to call on the creature they believe is Quetzalcoatl, the Plumed Serpent. Can the police get the location of the nest before more people are killed? And, once there, can they destroy the monstrous creature?

The Mask of Dimitrios (1944) Blackmails DVD