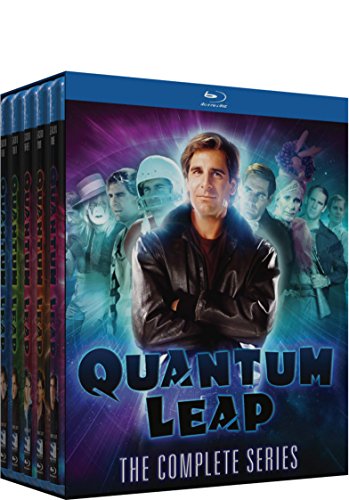 Studio synopsis: Get ready for an adventure of many lifetimes, with the ground-breaking sci-fi classic, Quantum Leap. With the complete series box set, you can now leap through all 95 thrilling episodes over 5 seasons of this Primetime Emmy Award-winning series, back-to-back and uninterrupted. The vast majority of the original music has been restored for our release!

Join Dr. Sam Beckett (Scott Bakula), a time traveler lost in time, who temporarily leaps into the bodies and lives of other people to “put right what once went wrong.” Accompanied by Al (Dean Stockwell), a wise-cracking holograph that only Sam can see and hear, Sam twists the hands of fate with each heart-pounding, action-packed adventure in the hopes that he can someday complete the mission that will take him home.

Affiliate links contained in this post will take you to Amazon.com. This means when you click a link, and purchase an item, the MHM Podcast Network will receive an affiliate commission. When you use these links MHM gets credit regardless of what you purchase, or from what country you order. Best of all, it’s at no extra cost to you! Advertisers and Affiliate Partnerships do not influence our content. See our Terms of Use about the inclusion of affiliate links on this site for more information.
February 7, 2017
1 minute read
Show More
Back to top button
Close
Close