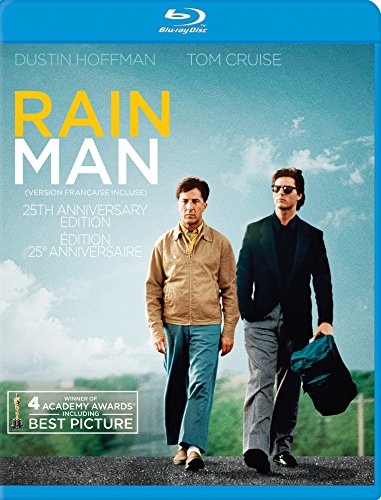 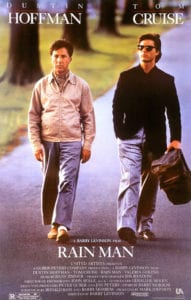 Rain Man is a story about Charlie Babbitt (Tom Cruise). Before Rain Main, Cruise played Brian Flanagan in Cocktail, Vincent in the Color of Money, and Maverick in Top Gun. In the words of Archie Bunker, he played a mick, a wop, and a regular American.

Aside from showing virtuosity with ethnically diverse characters, in 1988 Cruise was the quintessential Hollywood matinee idol. He was also a victim of typecasting. It seemed that Hollywood wanted Cruise to reprise his role in Risky Business interminably; the young, handsome, cocky, self-centered hustler who must desperately raise a lot of money.

For his role in Rain Man, Cruise shows off his range; playing a character that’s a departure from his Hollywood typecasting; one as a young, handsome, cocky, self-centered hustler who must desperately raise a lot of money.

Now about Charlie Babbitt’s back story: Charlie’s mother died when he was two; his father Sanford never remarried, and he was very distant with his son. At the age of 16, Charlie took his father’s beloved 1949 Buick Roadmaster convertible without permission. Charlie Babbitt claimed that he earned the clandestine joyride by getting straight A’s.

His father and the Cincinnati Police Department called it theft. So, Charlie sat in jail for two days; long enough for him to learn how to kite checks and run Ponzi schemes. Now, an embittered and hardened criminal, Charlie cut off all ties with his father and moved out west.

When Rain Man begins, Charlie is a Los Angeles car dealer. He tries to import four Lamborghinis to sell, and four people have already plopped down $80,000 in down-payments. Standing in Charlie’s way is a classic example of how over-regulation by the federal government screws the honest, hard-working entrepreneur every time.

Thanks to that pinko, tree-hugging liberal President Ronald Reagan and his Environmental Protection Agency, Charlie can’t deliver his Lamborghinis to his customers as promised. He faces financial ruin. Unfazed, Charlie drives his Italian whore to Palm Springs, because there just isn’t any good shopping in Los Angeles.

While en route, Charlie receives word that his father, long estranged, has died. Charlie must now skip Palm Springs and take his Italian whore to Cincinnati, which is like Palm Springs except with crappy weather and more black people.

While sitting in the office of his father’s attorney, Charlie Babbitt discovers the contents of his father’s last will and testament. From the estate, Charlie inherits some rose bushes and the very same Buick that he stole a decade earlier. An undisclosed beneficiary receives the paltry sum of $3 million cash. Charlie is pissed. A patient at a loony bin, located on the other side of the Ohio River, gets his daddy’s fortune instead.

That patient is Raymond (Dustin Hoffman). Raymond has autism (the real kind, not a make-believe diagnosis to give disability benefits to kids who just won’t behave). Raymond is also Charlie’s brother; someone Charlie never knew existed. “Why didn’t anybody tell me I had a brother?” becomes Charlie’s refrain, which makes a perfect counterpoint to Raymond’s incessant recital of Abbot and Costello’s Who’s On First routine.

Raymond’s trustee is Dr. Bruner, the director of the Wallbrook Institution and Country Club for Retards. Dr. Bruner has cared for Raymond for more than 20 years, and he is now in charge of the $3 million from Sanford Babbitt’s estate. According to Dr. Bruner, Raymond Babbitt is an autistic savant. While the severe neurologic and developmental disorder afflicts him, he also has a photographic memory and extraordinary skill in math.

Raymond doesn’t do well with change; he is a slave to routine and habit, a life that revolves around books he doesn’t understand, TV shows like the People’s Court and Wheel of Fortune, and tapioca pudding. After spending just a few minutes with his newfound brother, Charlie moves into action. He kidnaps Raymond and decides to use him as a bargaining chip to wrestle half of the $3 million from Dr. Bruner.

Charlie, who makes a living by flipping heavily leveraged luxury cars to rich bastards while thwarting U.S. customs laws, shocks his Italian Whore for being such a greedy, shallow, insensitive boor. So the Italian Whore walks out on Charlie, and decides to become a carnie, ending up on a trapeze with a bowtie-wearing pervert.

Raymond is afraid to fly, so Charlie drives him cross country in the Buick. Charlie’s scheme is to get the two to Los Angeles, and then hire Leland McKenzie to use his lawyerly skills and a David E. Kelley script to wrestle $1.5 million from Dr. Bruner.

During their road trip, Charlie begins a character transformation. The self-centered, greedy, white collar criminal repeatedly caters to his brother’s whims, and does everything he can to make Raymond feel at home on the road. Charlie also learns the reason his father sent Raymond to the loony bin. Evidently it is a bad idea to entrust a retard with a baby and scalding bath water.

Raymond sings Charlie a Beatles song which further triggers Charlie’s childhood memories. Raymond is the shadowy, protective figure from Charlie’s childhood, who Charlie falsely recalled was his imaginary friend, Rain Man. Charlie sincerely believes – albeit falsely –that he can cure Raymond; that all Raymond needs is brotherly love, exposure to the outside world, and a night with a Las Vegas hooker.

Charlie, the lone wolf who cut off all ties with his family a decade before, is now discovering that he needs family in his life, even if it means having a brother who is entirely dependent upon him. Charlie believes a life with him in Los Angeles is better for Raymond than a life in an institution. He expresses his love for his brother, and this new, nurturing Charlie Babbitt by deciding to exploit him. Charlie takes him to Las Vegas and makes a fortune at a Caesar’s Palace blackjack table due to Raymond’s unshakeable talent for counting cards.

Now that Charlie has plenty of money to cover his business losses and avoid financial ruin, he decides he no longer wants his father’s money. Flush with cash, Charlie’s Italian Whore returns; leaving the bow-tie wearing pervert to perform for children’s television. But Charlie, having completed his transformation, now decides that he wants to gain custody of his brother even without the inheritance, because having a man capable of fleecing Caesar’s Palace might come in handy. But a hearing with a court-appointed psychiatrist does not go well for Charlie’s quest.

Barry Levinson leaves his director’s chair, jumps in front of the camera, and proceeds to badger, confuse, and humiliate Raymond to such an extent that Charlie gives in. As Raymond boards an Amtrak train that will return him to the Wallbrook Institution and County Club for Retards, Charlie promises to visit his brother in two weeks, or as Raymond sees it, 1,209,600 seconds.