Ready or Not follows a young bride as she joins her new husband’s rich, eccentric family in a time-honored tradition that turns into a lethal game with everyone fighting for their survival. 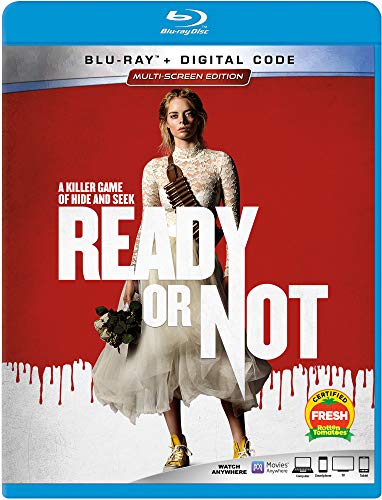 Ready or Not Blu-ray

‘Ready or Not’ Movie Summary 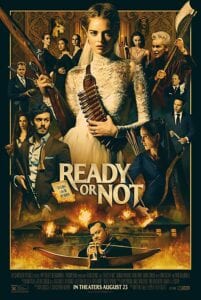 Ready or Not begins at the Le Domas mansion in 1989. There we see a man following two brothers, Daniel and Alex. That man, the brand new husband of the boy’s Aunt Helene, catches up to Daniel as he hides Alex in a closet. He’s in desperate need of Daniel’s help because someone is hunting him, and just severely wounded him in the process. Instead, Daniel decides to alert the rest of his family to Charles’ whereabouts. Helene tries to intervene to save her husband, but the rest of the family grabs Charles, and drags him into a room; never to be seen again.

30 years pass, and Alex is now a grown man on the verge of marrying Grace. As any blushing bride would be, she’s nervous, but still excited to join the family which they refer to as a gaming dominion.

When the two head out to a pre-wedding photoshoot with the rest of Alex’s family, Daniel’s wife, Charity, reveals that she only married Daniel for his money. Tony is the family patriarch, and he quite clearly dislikes Grace as does Aunt Helene. Daniel’s mother, Becky, gives Grace some encouraging words that only Alex’s opinion matters before the two actually marry.

After the ceremony, as the two newlyweds prepare to consummate their marriage, Helene interrupts them to call Alex down for a family meeting. Alex then tells Grace of the family tradition where each new addition to the family must join the others for a game at the stroke of midnight.

Grace and Alex meet up with the family where we also meet Emilie, her husband Fitch, and their sons, Georgie and Gabe. As everyone gathers around the table, the family maid, Clara reads the boys a bedtime story. Tony tells Grace that his great grandfather, Victor, started this tradition years ago after making a deal with a mysterious benefactor known only as Mr. Le Bail.

Per this deal, Le Bail granted Victor and all his future generations great wealth, but there was a catch. He handed over a very special box which every family member was to partake from to keep the deal going. Easy enough for a lot of money. Grace takes hold of the box where she’s to draw a card from it, and that will be the game that the family plays. Charity picked Chess while Fitch drew Old Maid. When Grace pulls out the card for Hide and Seek, the room grows deathly silent.

For Grace to win this game, she must stay hidden until dawn which freaks her out a bit. Little does she know, her day is only going to get worse from here. As she runs off to hide, the rest of the family takes up various guns to kill Grace when they find her. Actually, Helene gets an axe, and Fitch gets a manly crossbow to use if he can figure out how to shoot the thing. Alex, for his part, decides to sit this round out and help his wife which doesn’t sit well with Charity when she finds out.

Grace squeezes into a dumbwaiter to hide as the family sets off after her. Eventually she leaves it whereupon Alex runs into her, and orders her to stay silent. As this is going on, Clara is out roaming the house, looking for Georgie who has wandered off. Emilie spots her lurking, and takes a shot at the maid; killing her instantly.

Tony, Helene, Daniel, and Becky come running, and realizing the mistake, remove the body. Horrified at what she’s just witnessed, Grace is a bit freaked out, so Alex tells her the truth. For the family to win Hide and Seek they must hunt Grace down and kill her before dawn, or else they will lose and die themselves. Alex knew ahead of time, but didn’t tell Grace out of fear she wouldn’t want to marry him for some reason. Besides, what were the odds that she’d choose the only game that could get her killed? However, Alex promises to help a girl out in her time of need, and tells her to head for the exit in the kitchen.

Unfortunately, Tony, Helene, and Daniel spot Grace leaving the room, and try to take her down, but Emilie is there too, and all coked up. She starts randomly shooting, and hits just about everything but Grace. When Grace makes a run for it, the family realizes that she knows what they are up to.

With Grace looking for the exit, a second maid named Dora spots her from the dumbwaiter. As she calls out to the family, Grace shuts the dumbwaiter on the girl, and she’s crushed to death.

She next comes across Daniel in the study, but he doesn’t give two fucks about the hunt. He’s nice enough to give Grace a ten-second head start before squealing to everyone like he did with Charles years ago.

Now it’s time for Family Plan B. They regroup to start the hunt anew, and another maid named Tina comes in with information on Grace’s location. Alarmed, coked out Emilie shoot’s Tina through the head with Fitch’s crossbow. Her hallow groans annoys Helene who takes the opportunity to lop off the dying woman’s head to silence her once and for all. To speed things up, Helene suggests to Tony that they use the mansion’s cameras to locate Grace, but Tony won’t do it. It’s not part of their honorable tradition!

Grace next finds a rifle, and loads it with some nearby ammunition before entering the kitchen. When the Le Domas’ butler, Stevens, enters it too, Grace goes to shoot him. However, he informs her the ammo is just for display purposes only, and she’s shit out of luck. That teapot boiling water isn’t for display purposes only though, and she smashes it over his face; scalding him with hot water before hightailing it out of the house.

By now, Alex has turned on all cameras, and disabled the locks on all doors and windows in the place from the control room. When Tony and Daniel pay him a visit there, Tony attacks him. Alex fights back, and he starts to gain the upper hand, but Daniel distracts him long enough for Tony to deliver a knockout blow. They handcuff Alex to his bedroom to prevent him from helping his wife anymore.

As Tony and Helene talk about Alex, Helene says that Alex will eventually accept the family tradition just like she did when they killed Charlie. She too tried to save her husband, but eventually realized that she should have just killed the fella herself. Alex will soon realize it too.

Now outside, Grace races to the stable, and when she sees Georgie walking on his merry way, she stops him for help. Unfortunately for her, the little brat shoots a hole clean through her hand. So, she returns the favor, and KO’s his little ass.

Next a goat startles her, and she falls into a Goat Pit full of old family corpses and actual dead goats. She pulls herself out, and heads to the street to hitch a ride, but no luck. The girl’s a mess. Who’s going to pick that up?

Stevens finds Grace again, and the two fight. She strangles the guy with pieces of her ragged dress, and steals his car. However, Stevens isn’t dead yet, and when a vehicle assistant company shuts the car down remotely because it’s been reported stolen, Stevens catches Grace and tranquilizes her.

He then drives back to the Le Domas homestead while video-chatting with the family to give them the 411 on Grace. While he doesn’t notice Grace wake up, the family does, and they try to warn him, but it’s too late. Grace kicks him twice in the head, and the car crashes in a field.

Daniel arrives, and finds her safe, but he can’t let his family down—especially since Tony is watching him. Daniel knocks Grace out cold, and returns with her to the mansion.

Meanwhile, Becky tries to calm Alex down, and says that while he loves Grace, he will ultimately stick with the family. Alex retorts that he will kill her if anything happens to his wife.

That doesn’t stop them from placing Grace on an altar so they can sacrifice her to Mr. Le Bail. They each drink from a special cup of wine, but become violently ill before Tony has the change to kill Grace. Apparently Daniel roofied that cup because he now believes his family deserves to die.

He frees Grace, but Charity finds them, and she shoots Daniel in the throat. Grace and Charity then fight for her gun which Grace retrieves, but she’s out of bullets. Grace takes the opportunity to pistol-whip Charity instead.

As Grace goes to help Daniel, Alex breaks free from his cuffs and arrives to find Daniel dying. However, it’s too late for either of them to save him. Tony next tries to kill Grace, but she hits him over the head with a lantern. It falls to the ground; catching the curtains on fire.

Becky tries her luck next, but misses with an arrow. So, she tries to strangle the girl to death. Grace grabs Mr. Le Bail’s box, and bludgeons Becky to death with it. By now, Alex realizes that Grace won’t want to stay married to him, so he turns on her too, and gives her over to his family.

Everyone now holds Grace down, and the ritual continues on. As Alex aims to stab his wife in the heart, Grace breaks Helene’s grip. The dagger instead pierces her shoulder. She gets up with the dagger in her hand; screaming at everyone.

By now, the sun is up and shining. The family has lost. However, nothing happens. They are all still alive. Helene doesn’t care. She’s going to kill Grace anyhow. As she grabs the axe, Helene suddenly explodes. Fitch goes next, and Charity right after. Emilie tries to save her boys, but they all explode too.

Tony complains that he followed followed the rules, but that doesn’t save him either. Alex then begs Grace for forgiveness, but she hands him back her ring and demands a divorce. Alex goes boom too!

As the flames break into the room, they form the outline of Mr. Le Bail sitting at the head of the table. He gives Grace a nod of approval as she leaves covered in the blood of the exploded Le Domas family.

Outside, Grace perches herself on the garden steps; puffing a cigarette while the fire blazes behind her. When a firefighter asks her what happened, she shrugs and simply replies, “In-laws.”