In Real Genius, Mitch Taylor is one of the youngest students ever accepted to a university known for its programs for geniuses. They room him with the school’s science club legend Chris Knight. He needs help on a project to develop a high-powered laser. Together with super-brilliant friends, they are able to complete the task. However, when they find out that their professor intends to turn their work over to the military for use as a weapon, they decide to get even. 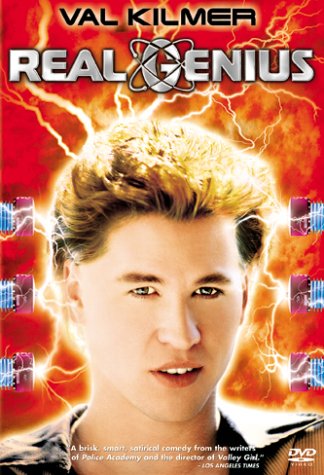 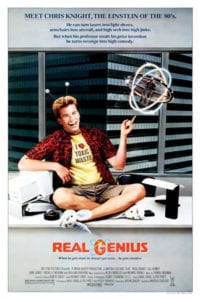 Real Genius begins in a shadowy room at an unnamed location, a group of men from the CIA watch an episode of ALF, and demand that the United States be protected from any furry invasion. They demand a weapon that will shoot a “laser” from outer space and zap the Melmac out of you…similar to Regan’s Strategic Defense Initiative, but with a better name. They call it project Crossbow.

Something this secret and dangerous can only be entrusted to a group of teenaged college students, and Professor Jerry Hathaway of Pacific Technical University is the man to lead that team. He recruits 15 year old Mitch Taylor to spark some life into the gang when the project hits a power snag. They can’t generate the 1.21 gigawatts of electricity to help Marty get back to 1985. Sorry, that’s the wrong film. They can’t generate a laser with 5 megawatts of power, and it now needs to be ready by mid-May, or Jerry will lose his house. Of course the kids are up for the task, but they don’t realize the sinister nature of the project. They’re smart, but they’re not that smart.

Mitch rooms with the project leader, Chris Knight. Chris has become something of a slacker during his stay at PTU, and studying comes after snubbing student beauticians and wacky hijinks. To make things worse for Mitch, the kiss-ass Kent and his merry minions are looking to sabotage Mitch (and Chris) to make Kent look better so Kent can get the job that Chris has been promised after graduation.

It’s not all doom and gloom for little Mitchy. He gets a hyperkinetic hard on for Jordan, a 19 year old girl with the metabolism of a cocaine addict. This girl never sleeps…except when she sleeps with 15 year old Mitch.

All of this happens under the watchful eye of Uncle Rico Hollyfeld, who lives in Mitch’s closet. You see, Hollyfeld used to be the smartest person on campus back in the 70s, but cracked from the pressure when he discovered that his inventions were being used to kill people.

Chris warns Mitch that he will end up the same way if he doesn’t lighten up, and have some fun…thus the 19-year old poonany, but truth be known, I would have gone for the even older Sherry who has a thing for banging the smartest men in the world. They don’t have to be legal, just old enough.

Eventually, Chris and Mitch do figure out the laser power issue, but on the day of finals, Kent sabotages the optics, and the laser destroys itself when Chris does one last test by himself. As he mopes back to his room, he comes across Kent who gives him his condolences on the meltdown (even though Chris hasn’t told a person about it). As Chris sulks on the dorm floor from his failure, he gets a brilliant idea from his liquid nitrogen that he keeps in the freezer to make coins for the coffee machine, and he runs off to find Mitch. They quickly make an even more powerful laser with Chris’ idea that has 6 megawatts of power.

Hathaway get his laser. Knight gets his job he was promised, and Kent gets screwed. Happy ending, right? Not exactly. As the group celebrates at a bar filled with cliched fighting women, Hollyfeld spoils their fun. He believes that the only thing a high-powered laser is good for is a weapon, and not only that, Jerry knew that was it’s purpose all along. Chris realizes that Hollyfeld is right, and that he has been a fool all along.

What should they do to fix the problem; disguise themselves as government workers, sneak into a military base, reprogram the laser to misfire, and destroy itself, all the while giving the local kids a big popcorn party back at Jerry’s house? Too far fetched? Not for these whiz kids, because they sneak into a military base disguised as government workers, reprogram the laser to misfire into Jerry’s house where it cooks tons of popcorn before destroying itself.

The film ends with the group watching the neighborhood children, playing in the popcorn, as is pours out of Jerry’s house. Hollyfeld pulls up in a Winnebago with that whore Sherry, and his 31.8% of winnings from the Frito Lay contest he entered over a million and a half times. They drive off into the sunset as Tears for Fears’ “Everybody Wants to Rule the World” plays in the background.

That, my friends, is a Hollywood ending.