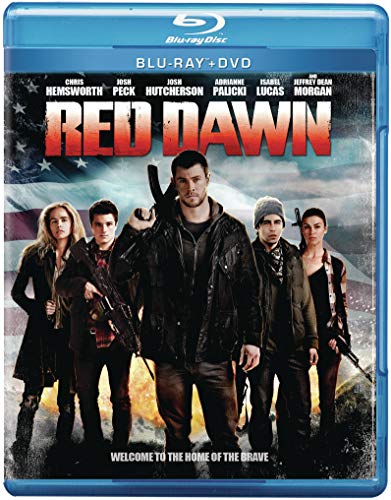 20th Century Fox Home Entertainment has officially announced that it will release a Blu-ray combo pack edition of Red Dawn (2012) this March.  The film is directed by Dan Bradley and stars Chris Hemsworth, Isabel Lucas, Josh Peck, Adrienne Palicki, and Josh Hutcherson.  Red Dawn will be available for purchase on Blu-ray combo pack and DVD on March 5, 2013.

In the film, the unsuspecting citizens of Spokane, Washington, wake up one morning to the shocking sight of foreign paratroopers dropping from the sky in a surprise attack on the United States.  Soon the entire region is under enemy control, but a group of courageous teenagers has decided to fight back, waging an all-out war against the invaders, to take back their town – and their freedom!

Red Dawn was released in November of 2012 and grossed over $44 million to date at the box office.  The film is a remake of 1984’s classic Red Dawn that starred Patrick Swayze, C. Thomas Howell, Lea Thompson, Charlie Sheen, and Jennifer Grey.

Disclaimer: Affiliate links are contained in this post. This means when you click a link, and purchase an item, Movie House Memories will receive an affiliate commission. Advertisers and Affiliate Partnerships do not influence our content. See our Terms of Use about the inclusion of affiliate links on this site for more information.
January 24, 2013
1 minute read
Show More
Back to top button
Close
Close