In this mythic tale, a woman warrior dedicates her life to avenging the murder of her family at the hands of an evil queen… and to recovering a sacred talisman that could grant the diabolical monarch ultimate power. 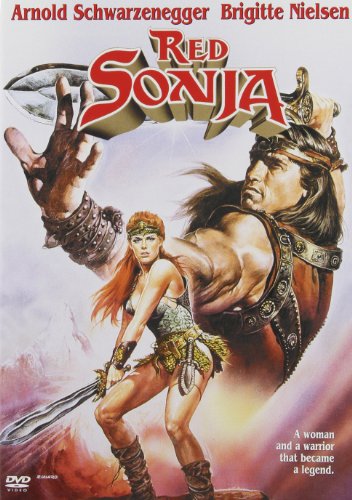 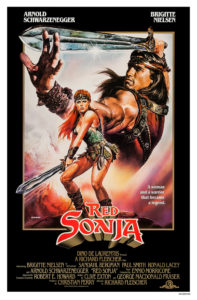 After a young red-haired woman named Sonja (Brigitte Nielsen) rejects Queen Gedren’s (Sandahl Bergman) sexual advances that leaves her emotionally and physically scarred, the queen orders her men to rape Sonja and leave her for dead. Sonja survives the ordeal and vows revenge.

The red goddess, Scáthach, answers her call for revenge and gives Sonja enhanced fighting abilities as long as she vows to never lie with a man unless he defeats her in fair combat. Sonja agrees and heads to a sword fighting school where she trains under a Grandmaster (Tad Horino) to hone her fighting skills. In time, she defeats the arena’s best fighter, Kyobo (Kiyoshi Yamasaki), and as he tries to embrace her as a sister in respect, she flinches because she is distrustful of all men.

Elsewhere in this world is a temple where Sonja’s sister, Varna (Janet Agren), is one of many priestesses who are performing a ritual to destroy a mystical Talisman that created the world and all living things. It must be destroyed because it’s become too powerful to control. As the ritual progresses, Gedren shows up with a small army to steal the Talisman. Once they are able to overpower the priestesses, Gedren has a male soldier touch the Talisman. He immediately vanashes. She then orders her handmaiden (Lara Lamberti) to touch it. She doesn’t disappear and Gedren confirms only women can touch the Talisman.

Varna watches from behind a pillar as Gedren’s soldiers steal the Talisman and toss the remaining priestesses into the hole/vault thing they were going to seal the Talisman in. Varna flees through a hidden passage, but a group of soldiers take chase, mortally wounding her on a zip line. The soldier’s pursuit of her catches the attention of a fella named Lord Kalidor (Arnold Schwarzenegger)—don’t call him Conan—on his way to the temple to make sure the Talisman is destroyed. He saves Varna and she asks him to find her sister, Red Sonja.

Kalidor arrives to the sword fighting school as Red Sonja picks out a new sword from the Grandmaster’s collection. Kalidor takes her back to Varna who tells Sonja to find the Talisman and send it into darkness before it ravages the world with storms and earthquakes. Unfortunately, she dies before she can give Sonja directions to the Talisman’s location. Kalidor says he will help Sonja, but she rejects him because she’s still afraid of men.

After Sonja sets out, she spots a lightening storm the Talisman created and heads in that direction. It leads her to the kingdom of Hablock which is now in ruins thanks to Queen Gedren. There, Sonja comes across the selfish ruler of the kingdom, a little boy named Prince Tarn (Ernie Reyes Jr.) and his servant/bodyguard Falkon (Paul L. Smith).

They tell Sonja that Gedren used the Talisman to destroy Hablock when Tarn refused to surrender. Tarn says he will get his revenge against Gedren before offering Sonja a job as his cook. She says thanks, but no thanks. However, she learns from the two that Gedren is held up in the Land of Perpetual Night called Berkubane and a man named Lord Brytag (Pat Roach) holds the key to a shortcut in the nearby mountain pass. Sonja heads to the pass.

When she arrives at the mountain gate, Lord Brytag demands a sexual “tribute” in exchange for safe passage, but Sonja has that silly little vow. So, she kills him and takes the key. Brytag’s men surround her and as they are about to attack, Kalidor—who’s been secretly tailing her—attacks them from behind. Sonja escapes through the gate while Kalidor stays behind to finish off the men.

The next day, Sonja comes across a group of bandits who are having a bit of fun drawing and quartering Prince Tarn after ambushed him while Falkon was off hunting for food. Sonja kills the bandits and frees Tarn as Falkon returns. The three then travel together to Berkubane. Along the way, Sonja teaches Tarn some manners.

Over in Berkubane, Queen Gedren is on to the three thanks to her wizard (Tutte Lemkow) who’s magically spotted them. Gedren recognizes Sonja as the one who scarred her for life and orders her men to bring Sonja to the fortress unharmed. She has Ikol (Ronald Lacey) use the Talisman to conjure up a storm that will force Sonja and co. to take shelter in a watery cavern where Gedran’s killing machine thing will kill Tarn and Falkon and capture Sonja—or something like that. However, as all looks lost for the three, Kalidor shows up to save the day. As he wrestles the machine, he has Sonja blind it. Once she does, the four escape.

It’s only now that Sonja accepts Kalidor’s help—but it’s mostly because he finally tells her he’s a descendant from the lords who entrusted the Talisman to the priestess temple. He then says he wants to have sex with Sonja, but she’s still got that vow. So, Kalidor challenges her to a sword fight and they fight to a draw. No poonany for the man we can’t call Conan.

Soon the group arrives for their castle onslaught. To keep Tarn safe, they trick him into volunteering into staying behind to guard the front entrance. Inside the castle, the walls are crumbling around Queen Gedren from the Talisman’s growing strength. Ikol realizes Gedren is insane once she refuses his request to stop utilizing the unstable relic. He leaves her in her throne room and makes plans to escape the castle with as many bags of Hablock’s gold as he can carry.

By now, Sonja, Kalidor, and Falkon have split up to find the Talisman. Eventually, Kalidor and Falkon fight Gedren’s guards in the dining hall while Sonja fights Gedren in her throne room. Tarn catches Ikol at the entrance and tries to fight him, but he is too small. Ikol tries to escape out the massive front door, but it crushes him to death.

As this goes on, Sonja kills Gedren’s wizard who was helping Gedren cheat in their fight. Gedren flees to the Chamber of Lights where she keeps the Talisman. With its power now beyond human control, the Talisman causes the floor to split open and reveal a chasm of molten lava beneath the castle.

Sonja and Gedren fight again, now locked in the camber behind its iron gate as Kalidor and Falkon look on. They lift the gate high enough for Tarn to slide through but he’s of no help. He quickly gets trapped under a fallen wooden fixture that was holding lit candles.

Sonja kills Gedren, tosses the Talisman into the lava below, and rescues Tarn. The Talisman’s destruction starts a chain reaction that tears the castle apart. The four escape the crumbling building in the nick of time.

Now safe, Sonja and Kalidor share a kiss—Kalidor I guess defeated something of hers—who knows. Tarn and Falkon head back to Hablock to rebuild it. Then, Tarn can try to find a suitable queen for when he’s old enough because Red Sonja won’t be available… or will she?