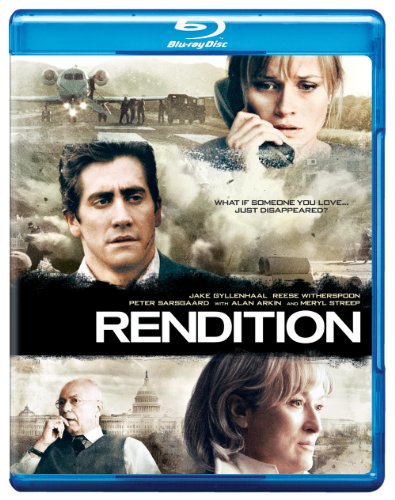 Warner Bros. Home Entertainment has announced that they are bringing the dramatic thriller Rendition to Blu-ray this Summer. The film is directed by Gavin Hood and based on a screenplay written by Kelley Sane. Rendition stars Jake Gyllenhaal, Reese Witherspoon, Meryl Streep, Alan Arkin, Peter Sarsgaard, and J.K. Simmons. It will be available on Blu-ray everywhere beginning on June 11th.

In the film, Douglas Freeman (Gyllenhaal), a CIA analyst working in North Africa, starts to question his assignment when he witnesses the brutal North African police interrogation of an Egyptian-American named Anwar El-Ibrahimi (Omar Metwally), an Egyptian-American chemical engineer and U.S. immigrant suspected of a terrorist act. Meanwhile, Anwar’s pregnant wife Isabella (Witherspoon) does everything she can to find him. She enlists the help of an old college friend, Alan Smith (Sarsgaard), an aide to Senator Hawkins (Arkin), who uncovers the shocking fact that Anwar has been shipped off to a third-world country for interrogation on the orders of Corrine Whitman (Streep), the head of the CIA’s anti-terrorism unit. Isabella and Douglas team up to try to secure Anwar’s release from a secret detention facility somewhere in the Middle East.

Rendition was released in October of 2007 and grossed over $9 million at the box office.

Disclaimer: Affiliate links are contained in this post. This means when you click a link, and purchase an item, Movie House Memories will receive an affiliate commission. Advertisers and Affiliate Partnerships do not influence our content. See our Terms of Use about the inclusion of affiliate links on this site for more information.
March 8, 2013
1 minute read
Show More
Back to top button
Close
Close