In the suspenseful sci-fi thriller, Replicas, William Foster is a neuroscientist on the verge of transferring human consciousness into a computer when his wife and beloved family are tragically killed in a car crash. Desperate to resurrect his family, William recruits a fellow scientist to help secretly clone their bodies and create replicas. When William learns that he can only replicate three of the four family members, he makes a decision with fateful consequences. 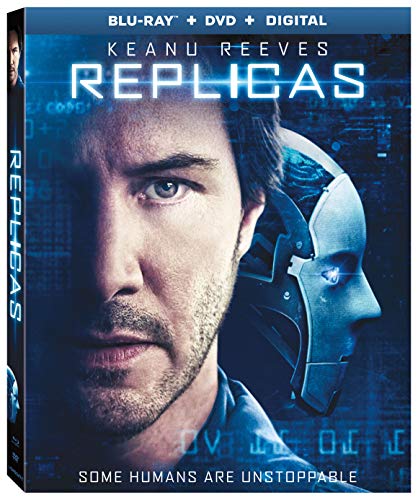 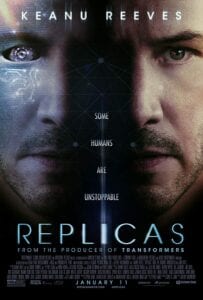 In Replicas, William Foster (Keanu Reeves) is a biomedical research scientist working for Bionyne Corporation in Puerto Rico. He and his partner Ed Whittle (Thomas Middleditch) are attempting to transfer the mind of a dead soldier into the computer mind of an android. William has repeatedly been able to transfer the consciousness to the android bodies, but the machine continually rejects the transfer for an unknown reason. William’s boss Mr. Jones (John Ortiz) is becoming impatient with William’s lack of results and threatens to pull the plug on the experimental project.

After another failed test, William plans to take his wife Mona (Alice Eve) and their three children Sophie (Emily Alyn Lind), Matt (Emjay Anthony), and Zoe (Aria Leabu) away on a weekend boating trip. However, they are involved in a traffic accident while they are in route. William survives the accident, but his wife and all three kids are killed. William is despondent and calls Ed to help him.

Ed is an expert in genetic cloning, and William begs him to help save his family. Ed agrees to help clone William’s family, but tells William that he needs to solve the problem of transferring human consciousness. He also tells William that he only has three cloning pods, so William will have to choose who will not be cloned. William chooses his youngest daughter Zoe. William erases the memory of Zoe from his family members by accessing the neural maps.

The clones takes seventeen days to generate which William spends desperately trying to find a way to combine his family’s consciousness into their still forming bodies. Ed helps him from time to time, and lies to Jones when William fails to show up to work. Eventually, William has to go in to keep Jones from canceling the project. William also spends the seventeen days erasing the physical existence of Zoe from the family home while also creating cover stories to explain his family’s absence from work, school, and social media. Once the clones are done, Ed and William sedate them since William is not ready to transfer the neural maps yet.

While his wife is unconscious, he notices that her central nervous system reacts to his touch. He realizes that his experiments have failed because the mind expects connection to a biological body with heartbeat and respiration, rather than a synthetic one. With this knowledge, he realizes that the transfer of the neural maps into the clones will not be a problem since they will be human. He begins working on a simulated mind-body interface to make the android body appear biological. He uses the neural map of his own mind for the interface.

Mona, Sophie, and Matt seem to be fine in their new clone bodies, although they have residual memories of the accident. William deletes the memory of the accident from Sophie’s neural map and then reinstalls the neural map. Mona catches him doing this and he tells her everything that happened, except Zoe. However, the family begins to ask about Zoe and William confesses that he couldn’t save her and erased her from their memories.

Jones comes to the Foster home and reveals that he is aware of everything that William and Ed have been doing. Jones informs William the research that they have been working on was not intended for medical purposes but was designed to provide advance military weapons for the United States government. Jones demands that William turn over the interface. Jones also tells William that his clone family needs to be destroyed so that there are no loose ends.

William injects Jones with a sedative, knocking him unconscious. He destroys the interface so that the only copy is in his head. William takes his family and attempts to escape from the island. William tries to start a boat to escape to the mainland, but Jones’ men capture his family. William pursues them to Bionyne where he discovers that it is Ed who informed on him. Jones kills Ed and forces William to finish his experiment and transfer his consciousness into the android body. The interface works, but the result is that the android reacts as William would.

The android kills Jones’ henchmen to protect Mona and the kids. Jones is mortally wounded by the android, but William stops him so that they can come to a deal. William and his android make a deal with Jones. He can live in a cloned body and become rich by working with the android selling clone transfers to wealthy people. In exchange, William and his family get to live their life in peace. The film ends with William bringing a cloned Zoe to meet her anxious family.