In Repo Man, a weathered repo man in a desolate part of Los Angeles takes a nihilistic middle-class punk under his wing. However, the job becomes more than either of them bargained for when they attempt to repossess a mysterious (and otherworldly) Chevy Malibu that has a large reward attached to it. Their hilarious escapades also have a politically caustic take on President Reagan’s domestic and foreign policies. 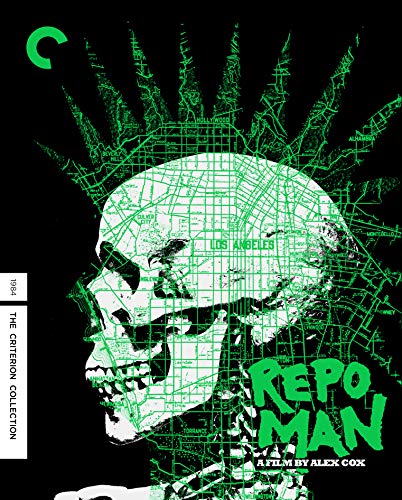 Disenfranchised like so many other “go-no-where’s” of the Reagan era, Otto’s attitude gets him fired as a grocery stock boy. Then, Debbie, the girl Otto wants to nail, bones another punk named Duke before he gets the chance. Dejected, depressed and bored, Otto roams the streets with a half buzz of generic beer.

As he walks through the city of angels, he meets an old and haggard repossession agent named Bud. Bud introduces Otto to the world of repossessing cars; something initially Otto opposes because it is a straight job. Soon though, the world of stealing cars, snorting blow and bringing in tons of dough hooks him.

While showing Otto the ropes, Bud explains that ordinary fucking people spend their life avoiding tense situations, while a repo man spends his life getting into tense situations. Otto soon meets the other guys at the Helping Hands Acceptance corporation; Oyl, the rent a cop, Lyte, and Miller, the handyman.

After a while on the job, Otto meets Leila, and she tells him about a mysterious 1964 Chevy Malibu from New Mexico. Apparently, it holds dangerous but dead extra terrestrials in the trunk. Behind the wheel of the car sits a deranged and radioactively scientist, who stole the aliens from the Los Alamos National Laboratory.

Otto blows off Leila’s story, but later learns through the news paper that the Malibu fetches a $20,000 reward if located. Leila and Otto decide to cash in on this alien ride, but a slew of other folks including the likes of secret government agents and rival repo man, Los Hermanos Rodriguez, are want that Malibu.

The car (and its fried out driver) elude repossession a number of times. After Otto and Bud quarrel, Otto finds himself back on the street. That allows him to dedicate all his time to chasing that $20,000 Malibu.

When he finds it, the glowing scientist, J. Frank Parnell stops the car, and let’s Otto in. Parnell rambles on to Otto about radiation, and the outrageous lies said about it. “Pernicious nonsense” he calls the warnings, and then explains to Otto everyone could handle a hundred chest xrays a year “and they ought to”.

Seeing that Parnell is radiated out of his mind, Otto suggests he take the wheel. Just then, Parnell slumps over and crashes; allowing Otto to ditch the old man, and safely lock up the space ride at the gated yard.

Bud arrives and picks Otto up. The two reconcile, and then grab some generic beer. At the liquor store, they find Duke, Debbie and their mohawked-friend Archie robbing the place. A gun battle ensues where Bud gets shot in the ear, but Duke dies an agonizing-slow gurgling death. The secret agents arrive and then capture and torture Otto. Fortunately, Marlene and Los Hermanos Rodriguez also arrive to free him.

The foursome go to the hospital to bust Bud out, and they take off in the Malibu which now glows green in the night air. He takes it back to the yard where Otto fails to convince Bud to split the reward 60/40. The feds show up and blast Bud, and the Reverend Larry shows up with Bible in tow.

The agents, decked out in white safety suits, cannot penetrate an invisible force field surrounding the Malibu. Miller steps out from the shadows, and slides into the driver’s seat. He then signals for Otto to get in. The two of the cruise over Los Angeles before jettisoning out into space.