In a world ravaged by a virus infection, turning its victims into the Undead, Alice (Milla Jovovich), continues on her journey to find survivors and lead them to safety. Her deadly battle with the Umbrella Corporation reaches new heights, but Alice gets some unexpected help from an old friend. A new lead that promises a safe haven from the Undead takes them to Los Angeles, but when they arrive the city is overrun by thousands of Undead – and Alice and her comrades are about to step into a deadly trap. (Courtesy of Screen Gems) 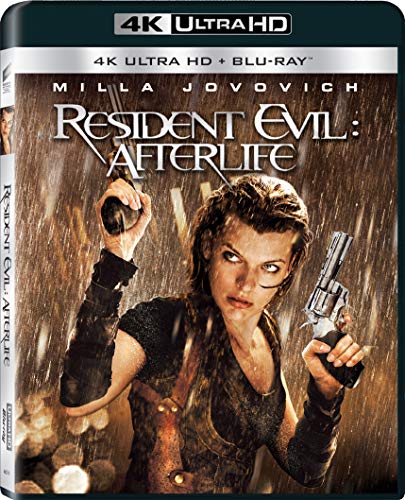 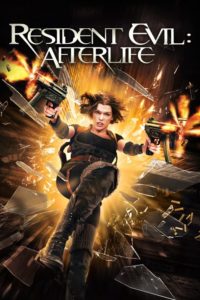 One year has passed since the events of Resident Evil: Extinction. Alice (Milla Jovovich) and her clones continue to lead an assault against the Umbrella Corporation, the creators of the T-virus. In Tokyo, Alice’s clone team breaches and attacks Umbrella’s headquarters. Alice and her clones kill nearly everyone in the facility except for Umbrella CEO Albert Wesker (Shawn Robert), who attempts to escape in a plane as he destroys the Umbrella underground facility. The real Alice boards the plane before take off and fights with Wesker. The Umbrella CEO injects Alice with an anti-virus to remove her superhuman abilities. Additionally, Wesker reveals that he has used to the T-virus to gain his own superhuman powers and attempts to kill Alice. Only the autopilot crashing the plane into some mountains prevents Wesker from succeeding. Alice appears to be the only survivor of the crash.

Six months later, Alice travels to Alaska via plane looking for the origin point for broadcast signals from an alleged safe haven named Arcadia. Upon arrival, Alice only finds abandoned planes, but no people, not even her friends from the previous film. Alice is suddenly attacked by Claire Redfield (Ali Larter) who appears to have lost her memory. During the fight, Alice destroys a spider-like device on Claire’s chest that appears to be controlling her. The device also appears to have caused Claire’s amnesia. Claire has no memory of what happened to the rest of Claire’s group, including the young K-Mart (Spencer Locke).

A short time later, Alice and Claire travel to Los Angeles in search of additional survivors of the T-virus. While flying over the city, they find a group of survivors living in a prison that is surrounded by thousands of zombies. Alice makes a daring landing on the top of the prison roof. Once safely on the roof, Alice meets the prison survivors Luther West (Boris Kodjoe), Crystal Waters (Kacey Clarke), Kim Yong (Norman Yeung), Angel Ortiz (Sergio Peris-Mencheta), Wendell (Fulvio Cecere), and Bennett Sinclair (Kim Coates).

The prison group inquires as to whether Alice has been sent by Arcadia to save them. Alice informs them that she has been to Alaska and found nothing. Luther informs her that Arcadia’s signal is coming from a cargo tanker ship off the coast that can been seen from the roof of the prison. Luther informs Alice that no one on the ship has responded to their rescue flares and that the ship has not moved in sometime. Regretfully, Alice informs them that she is unlikely to survive a take off and another landing on the roof so they will need to find an alternate route to the Arcadia ship.

I’m what you used to be. Only better. Albert Wesker (Shawn Roberts)

Luther takes Alice into the prison and introduces her to the facilities’ last resident, Chris (Wentworth Miller). Chris claims that he worked at the prison and that he was imprisoned by the inmates as they evacuated. Chris makes promises to reveal an escape route out of the prison in exchange for his freedom. Alice is skeptical. Later, Alice goes to the prison showers to wash up and finds Wendell peeping on her. She holds him at gunpoint, but they are attacked by a group of infected zombies that dug into the prison from the sewers. The zombies kill Wendell, but Alice kills the zombies. Alice concludes that they need to get out of the prison as soon as possible.

Alice and Luther decide to take Chris up on his offer and free the prisoner. Once Chris sees Claire, he reveals that he is her brother. Chris reveals to Alice and Luther that the prison has an armored car they can use to escape. However, a giant axe-wielding monster (Ray Olubowale) arrives at the prison gate and begins to break it down. Alice, Chris, and Crystal go to the basement armory via a flooded underwater tunnel to get more guns. Unfortunately, Crystal is killed by zombies in route. Meanwhile, Luther and Claire attempt to reinforce the gate to buy some time. Angel informs Bennett and Yong that the armored car is missing its engine, and it will take him a week to fix it. Bennett shoots Angel and heads for the roof to steal Alice’s plane. He successfully takes off and heads for Arcadia.

The Axeman breaks down the gate, and all the human survivors retreat to the interior of the prison. Alice orders the group to escape through the shower tunnels dug by the tunneling zombies. The Axeman breaks into the showers and slices Yong in half. Alice is knocked unconscious, and Claire is left to fight the Axeman. She distracts the Axeman for a few moments allowing Alice to regain consciousness and kill the Axeman with a shot to the head. Alice, Claire, and Luther escape into the sewage tunnels, but Luther is drug back by a zombie and cut off from the group.

Alice, Claire, and Chris board the Arcadia via a boat. Initially, they discover that the tanker is empty. The ship triggers Claire’s memory and she suddenly remembers that Arcadia is an Umbrella trap to get test subjects. They find that the interior of the ship contains hundreds of human survivors in suspended animation. The trio begins to awaken the survivors, but Alice discovers a blood trail and follows it. It leads to a still alive Wesker. Bennett is also present, deciding to join forces with the powerful Umbrella CEO. Wesker reveals that the T-virus revived him after the crash, but that he struggles to prevent it from completely controlling him. Wesker believes an infusion of fresh human DNA could help him gain control. Wesker believes Alice’s DNA is superior to his since she retained control despite bonding with the virus at a cellular level, and if he eats her, that he will have the same control.

The Redfields fight Wesker while Alice battles Bennett. Wesker overpowers Chris and Claire, but Alice and a revived K-Mart defeat both Bennett and Wesker. They lock Bennett in the room with Wesker’s corpse which revives and devours the traitorous Bennett. Wesker escapes in an aircraft and activates a self-destruct bomb on the ship. However, Alice anticipated the move and placed the bomb onto the aircraft before Wesker took off. Wesker’s aircraft is destroyed, but the Umbrella CEO parachutes away from the explosion. Unbeknownst to Alice, Luther emerges from the sewers relatively unharmed.

Alice decides to turn Arcadia into a real haven and broadcasts a new message for any survivors to join the crew. As Alice, Claire, and Chris look out over the horizon and a brighter future, Arcadia is approached by a squadron of Umbrella military aircraft.

In a mid-credits scene, Jill Valentine (Sienna Guillory) commands one of the approaching Umbrella aircraft. The former friend of Alice is shown wearing one of the same mind control devices on her chest that Claire was wearing earlier in the film. She warns her crew that they will be in the fight of their lives against Alice.