Several years have passed since the events of Resident Evil: Apocalypse. The T-virus has ravaged the Earth and there are but a handful of survivors. Alice wanders the Earth alone, fearing that her association with her friends would make them an easy target for the evil Umbrella Corporation. Dr. Isaacs continues his experiments but finds himself in desperate need of some of Alice’s blood. Alice soon finds herself reunited with Carlos and L.J. who are part of a convoy looking for a safe harbor from the zombie hordes. However, Alice’s presence soon draws the forces of Dr. Isaacs and Umbrella upon them that will place the small human group in a fight for their survival. 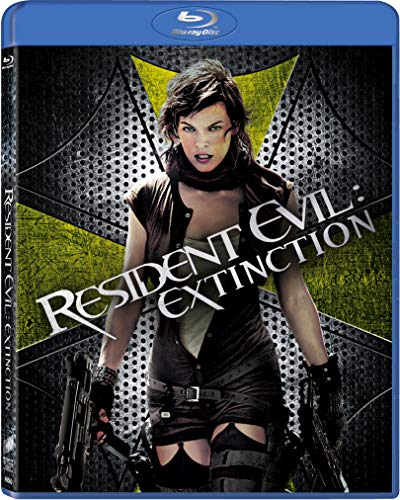 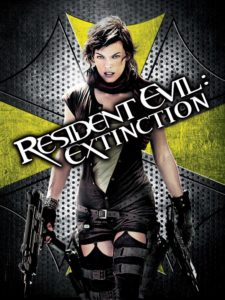 The film begins with Alice (Milla Jovovich) waking up on the shower floor in the mansion, just as she did in the first Resident Evil film. Similar to the first film, she wanders the hallways looking for answers as to why she is there. Dissimilar to the first film, she encounters several security traps along the way. During her escape, Alice makes use of her new telekinetic powers to kill a security guard. However, she is eventually killed by a bouncing mine hidden in the floor of the hallway. It is revealed that this Alice is merely a clone of the original Alice that is being tested by Dr. Alexander Isaacs (Iain Glen). Dr. Isaacs has the body dumped into a pit filled with dozens of other failed Alice clones outside of an Umbrella Corporation facility in the middle of the Nevada desert surrounded by hundreds of zombies.

A narration by the real Alice explains that Umbrella failed to contain the contamination of Raccoon City, and the T-virus spread around the world in a matter of months. The human population was nearly destroyed, and the entire global environment was affected. Alice now wanders the ravished wastelands alone, afraid that Umbrella’s desire for her DNA would put her friends in danger. On her journey, she responds to a call for help from a group of survivors which turns into an elaborate ruse to steal her weapons and possessions. She kills all the ravagers and acquires an abandoned notebook that refers to an uninfected area in Alaska. Alice is still haunted by the Umbrella experimentation and finds her telekinesis powers continuing to develop, sometimes out of control while she sleeps.

Meanwhile, Dr. Isaacs continues his research as head of Project Alice. His experiments are not proceeding well and requests that Umbrella make the recapture of the original Alice a top priority due to her ability to bond with the T-virus without mutating. At a holographic meeting of the heads of Umbrella, Dr. Isaacs attempts to convince the board that he can use Alice’s blood to develop a treatment that will tame the infected zombies. The board is skeptical, especially Umbrella CEO Albert Wesker (Jason O’Mara). Wesker orders Issacs to continue his work with the clones. Dr. Isaacs also continues to conduct his unauthorized work on taming transformed zombies in order to use them as foot soldiers.

At the same time, a convoy of survivors, lead by Claire Redfield (Ali Larter) and Raccoon City survivors Carlos Oliveira (Oded Fehr) and Lloyd Jefferson “L.J.” Wade (Mike Epps), continue to travel through the desert looking for safety and supplies. Carlos and L.J. search an abandoned hotel and are attacked by a group of zombies. The zombies are dispatched but L.J is bitten, although he keeps the knowledge of his injury to himself. The next morning as the convoy prepares to move on, they are attacked by flock of crows that are infected by the T-virus after feeding on dead flesh. L.J.’s girlfriend Betty (Ashanti) is killed by the crows. The timely arrival of Alice saves the convoy as she uses her telekinesis to control flames to destroy the murder of crows. Alice is overwhelmed by the effort and falls unconscious. She awakes sometime later and is introduced to Claire by Carlos. Alice shares her knowledge of the notebook and the possible safe harbor in Alaska with Claire and tries to convince her to take the convoy there.

For so long, I thought you were the future. I was wrong. I am the future. Dr. Alexander Isaacs (Iain Glen)

Dr. Isaacs sets his ambush on the convoy as it attempts to refuel in the remains of Las Vegas. Dr. Isaacs observes the attack from the roof of a nearby abandoned casino. During the attack, most of Claire’s convoy is killed. L.J. finally succumbs to the T-virus infection in the middle of the attack and bites Carlos. Dr. Isaacs and Umbrella attempt to shut Alice down remotely using satellites. However, she breaks free from Umbrella’s control and continues killing Isaacs’ zombies. During the battle, Alice locates Isaacs and effectively directs some of the zombies to attack Dr. Isaacs and the Umbrella scientists. Isaacs is bitten but manages to escape via a helicopter. Alice and the teenage survivor K-Mart (Spencer Locke) use an abandoned Umbrella computer to track the helicopter’s flight path back to Umbrella’s secret underground desert facility.

Alice and Claire come up with a plan to steal the helicopter so that Claire can fly the remaining survivors to Alaska. An infected Carlos agrees to sacrifice himself in order to plow his way through the surrounding zombie mob. The sacrifice will create a path for Alice and Claire to get to the facility. During the rescue, Alice makes the decision to remain behind to eliminate the threat of Umbrella. Claire flies the helicopter to safety, and Alice enters the facility after seeing the open grave of the dozens of deceased Alice clones.

In the facility, Slater and his commandoes move to take control of Dr. Isaac’s lab after the doctor’s continued disobedience. They find Dr. Isaacs injecting himself with massive amounts of the anti-virus in a failed attempt to counteract his infection. Slater shoots Dr. Isaacs, but the wound triggers a mutation that transforms Dr. Isaacs into the monstrous Tyrant. Tyrant kills everyone in the facility but finds himself trapped in the lab’s lower levels by the facility’s artificial intelligence, the White Queen (Madeline Carroll).

Once Alice enters the facility, the White Queen informs her what happened to Dr. Isaacs. The computer program also informs Alice that her blood can cure the T-virus and defends her “sister” A.I.’s, the Red Queen, prior actions in the Hive as being necessary to protect humanity. Alice agrees to work with the White Queen to stop Tyrant. On the way to the lower levels, Alice encounters one of her clones which has awaken from suspended hibernation but appears to die from shock soon after. She finds and fights Tyrant. Alice leads Tyrant to a replica of the Hive’s laser corridor in the first film. Tyrant is cut apart by the lasers, but the system is shut down by Alice’s clone, who is alive, before the lasers can cut apart Alice herself.

Back in Tokyo, Wesker informs the Umbrella executives that Dr. Isaacs and the North American facility have been lost. A holographic Alice interrupts the meeting and informs the Umbrella board that she and her “friends” are coming for all of them. The film ends with Alice and her clone looking at a storage facility that contains hundreds of additional Alice clones, each with the capabilities of the original.