When Boston police detective, Nick Walker, is killed in the line of duty, he becomes the newest member in the Rest In Peace Department to avoid a bad judgement day because he buried valuable evidence in his backyard. In exchange for redemption, Nick teams up with the veteran R.I.P.D. officer and Roy Pulsipher to track down the stubborn souls who refuse to cross over. However, a sinister scheme jeopardizes not only the peace department but also the frail cosmic balance between this world and the afterworld. 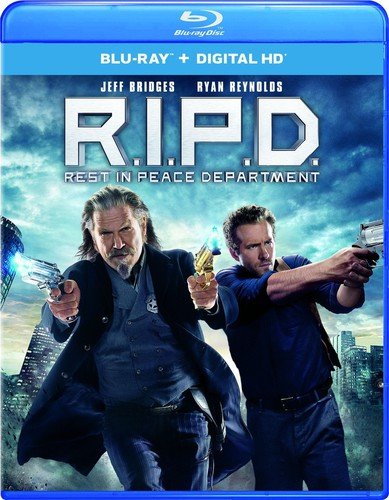 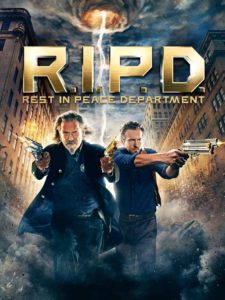 Boston Police Department officers Nick Walker (Ryan Reynolds) and Bobby Hayes (Kevin Bacon) have discovered several gold shards while on duty. The two men agree to steal the gold and keep it secret. Nick has buried his share in his garden but quickly realizes that he and his wife, Julia (Stéphanie Szostak), do not need it. Nick decides to submit it as evidence. Bobby seems cool with that revelation from his buddy when he lets him know his decision.

However, later during a raid, Bobby tells Nick that he won’t let him turn in the gold. He kills Nick in the line of duty before triggering a shootout to cover up the murder. As Nick dies, time stops around him and a vortex opens up into the sky which begins to pull him up. Suddenly, Nick finds himself in a white, spartan room.

Nick is in a limbo of sorts, and facing eternal damnation for his thievery, Mildred Proctor (Mary-Louise Parker), the head of the Boston Police Department R.I.P.D. (Rest In Peace Department) unit, offers him a chance to redeem himself. He can work for them for the next 100 Earth years capturing Deados (souls who refuse to move on to the afterlife), and other monsters who, disguised as humans, threaten the mortal realm.

With no real choice, Nick agrees. Proctor immediately partners him with a former U.S. Marshal and Union soldier in the American Civil War named Roicephus “Roy” Pulsipher (Jeff Bridges). Their first stop is to the cemetery to watch Nick’s funeral. Nick attempts to approach Julia, but she doesn’t recognize him. Roy explains that R.I.P.D. officers have new identities and appearances which prevents tthe living from seeing who they really are. Nick appears to the real world as an elderly Asian man named Jerry Chen (James Hong) while Roy appears as a beautiful blonde woman named Opal Pavlenko (Marisa Miller).

Roy takes Nick on his first mission to find a suspected Deado named Stanley Nawicki (Robert Knepper). During their interrogation, Nick finds Stanley is in possession of gold that looks very similar to the pieces Bobby stole. Nick and Roy submit the gold as evidence and then pay a visit to one of Roy’s informants named Elliot (Mike O’Malley).

While talking to Elliot, Nick gives him one of the pieces of gold he kept from the evidence department before leaving with Roy. The men watch Elliot leave Fenway Park and learn that he’s working with Bobby in some capacity. They next follow Bobby who drives to Nick’s house. After chatting with Julia, he digs up Nick’s gold hidden in his back yard. He then hands it off to another Deado named Pulaski (Devin Ratray). They try to interrogate Pulaski, but he’s too strong for them. He transforms into a hulking monster and takes off into the city with the gold. The ensuing chase draws unwanted attention to the living humans Bostonians and causes a panic.

When the two return to R.I.P.D. headquarters, Eternal Affairs tells Proctor that the gold fragments are part of an ancient weapon called the Staff of Jericho which has the power to reverse the flow of souls from Earth to the afterlife. Eternal Affairs also orders Proctor to remove Roy and Nick from the case, suspend them from active duty due to the exposure caused by the monster’s rampage, and they schedule a hearing is scheduled for the next day. If things go bad for Roy and Nick (which they most likely will), they will both be erased. Sad from this turn of events, Nick walks away because he has somewhere more important to be.

He tries one last time to reveal himself to Julia while she jogs at a local track. While she’s still unable to recognize him, there’s something in his alter ego’s touch that allows her to momentarily feel his presence. Confused, she runs off.

Roy’s followed him to the track and the two decide to stop whatever Bobby’s planning. They find Bobby at his house and discover he’s a Deado. They arrest him, and he goes in a bit too easily. One of the items they confiscate from him is half a sphere. When the Evidence Clerk (Chris Everett) tosses it in a bin with another half sphere that was recently brought in, the pieces merge into one and it releases a pulse that freezes the whole department. With Roy and Nick unable to move, Bobby and a group of Deados steal the remainder of the gold and flee just as the affects of the pulse wear off. Roy and Nick then take chase.

Bobby and his minions take the pieces it to the top of assemble the Commonwealth building and assemble the Staff of Jericho there. They intend to use it to remain in the living world indefinitely. Bobby has sent more minions to kidnap Julia. When she arrives, he stabs. Her blood activates the staff and the vortex appears in the sky. More vortices appear on the ground and begin tearing apart the city.

Nick and Roy have to kill all of Bobby’s minions before they can take him on and destroy the staff. Roy tries to take apart the staff while Nick fights Bobby. When Roy drops a city garbage truck on the staff, it breaks back into pieces. The main vortex reverses its pull and the dead once again go back into the sky.

This distracts Bobby long enough for Nick to use his one last bullet in his soul eraser to shoot Bobby in the head, killing him for good. As Julia nears death, time slows for her like it did for Nick when he died. This brings her close enough to death to see Nick one last time as himself and not as an elderly Asian man. He tells her he loves her and kisses her goodbye in a tearful farewell. Nick encourages her to continue living for both of them.

Later in a hospital, Proctor tells Nick that Julia will survive. Eternal Affairs allows her to reinstate the two but adds 53 years to Roy’s term; partly as punishment and partly because Proctor has a thing for Roy. As one final reward, Roy gives Nick a new appearance. Unfortunately for him, he’s now a young Girl Scout (Piper Mackenzie Harris).