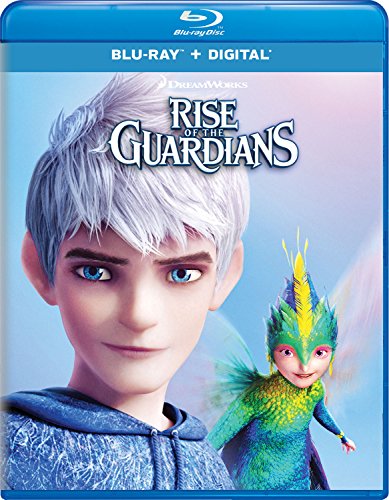 Rise of the Guardians [Blu-ray]

‘Rise of the Guardians’ Movie Summary 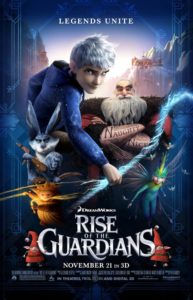 Jack Frost (Chris Pine) awakens from a frozen pond with amnesia. He has no recollection of how he got there. Even worse, he soon realizes that no one can see or hear him. He does discover that he has the power to freeze things and sets about playing practical jokes on people with his powers. Three hundred years later, Jack is the Spirit of Winter and enjoys delivering snow days to school kids around the world. However, Jack still resents that people do not believe in him or see him.

At the same time at the North Pole, the Man in the Moon, the spirit who decides who is a Guardian, warns Nicholas St. North aka Santa Claus (Alec Baldwin) that Pitch Black aka the Boogeyman (Jude Law) is threatening the children of the world with his nightmares. North calls his fellow Guardians E. Aster Bunnymund aka the Easter Bunny (Hugh Jackman), the Sandman, and Toothiana aka the Tooth Fairy (Isla Fischer) to the North Pole to alert them of the danger. The Man in the Moon communicates to them that Jack Frost has been chosen to be a new Guardian. Bunny is sent to bring Jack to the North Pole. Once there, North tries to explain to Jack that every Guardian has a center, something they are the Guardian of. However, the discussion is interrupted when a call for help is received by Tooth’s fairies.

When the Guardians and Jack arrive at Tooth’s palace, they find it under attack by Pitch’s forces. Jack also learns that each and every baby tooth contains childhood memories of the children who lost it, including Jack. Pitch and his evil dark forces kidnap all of Tooth’s subordinate tooth fairies except for Baby Tooth, who is saved by Jack. Pitch also steals all the teeth, preventing Tooth from sharing Jack’s memories of his previous life with him. More importantly, the theft of the teeth and kidnapping of the subordinates weakens the children’s belief in Tooth.

The Guardians formulate a plan to counter Pitch’s plan. They decide to collect the teeth of the children all around the world. During their mission, North and Bunny get into an argument that results in a boy, Jamie Bennett (Dakota Goyo), being awoken. Jamie believes in the Guardians so he can see everyone but Jack. Pitch’s nightmare forces attack, provoking the Sandman as the Guardian of Dreams. Jack tries to intervene, but Pitch aims a bow at the Sandman who is overwhelmed by the evil and disappears.

The faith of the children of the world begins to fade. As Easter approaches, the defeated Guardians gather at Bunny’s home. The Guardian’s receive additional assistance from Jamie’s little sister, Sophie (Georgie Grieve), and they each begin the process of painting eggs for Easter. After Jack takes Sophie home, he is lured to Pitch’s lair by a voice. Pitch tempts Jack with promises of his past memories and his fear of non-belief. Pitch’s distraction gives the villain enough time to destroy the eggs, causing the children of the world to not believe in Easter or Bunny. Due to the loss of faith, Bunny reverts to a normal rabbit. The Guardians lose faith in Jack, so he retreats to Antarctica. Once there, Pitch attempts to convince Jack to join him. Jack refuses, but when Pitch threatens to kill Baby Tooth, Jack turns over his staff in exchange for Baby Tooth’s release. Pitch breaks the staff, which is the source of Jack’s magic, and throws Jack into an icy chasm.

While in the chasm, Jack regains his memories of life before his death. Jack recalls that he was a normal teenager with a younger sister. Jack saved his sister from falling through thin ice on a frozen pond at the cost of his own life. Realizing that he was a hero, Jack repairs his staff and returns to the lair to rescue the kidnapped baby fairies.

Meanwhile, every child in the world except Jamie begins to disbelieve in the Guardians due to Pitch’s influence. The lack of belief weakens the Guardians. When Jamie’s belief begins to wane, Jack goes to the boy and makes it snow in the young boy’s bedroom. The trick renews Jamie’s belief and lets Jamie become the first person to ever believe in and see Jack. Jamie and Jack gather the boy’s friends, whose renewed belief bolsters the Guardians’ fight against Pitch. Pitch threatens the children, but their dreams prove stronger than Pitch’s nightmares. As a result, the Sandman is resurrected, and the Guardians reunite.

Pitch attempts to retreat to fight another day. However, his own fear of the Guardians causes his own nightmares to attack him. The nightmares drag Pitch back into the underworld. Afterward, Jamie and his friends bid goodbye to the Guardians and Jack. Due to his heroism, Jack is anointed his place as the Guardian of Fun.