A re-imagining of the classic tale. Robin of Loxley is a British lord in Nottingham. He is drafted into the King’s crusade against the Saracens and forced to leave the love of his life, Marian. Four years later, Robin returns to find that he has been declared dead and stripped of all monies and titles. Even worse, Marian has moved on to a new man, and Nottingham is now controlled by the corrupt Sheriff of Nottingham. Robin, and his new companion John, decide to orchestrate a guerilla campaign against the Sheriff to bring justice back to his home. 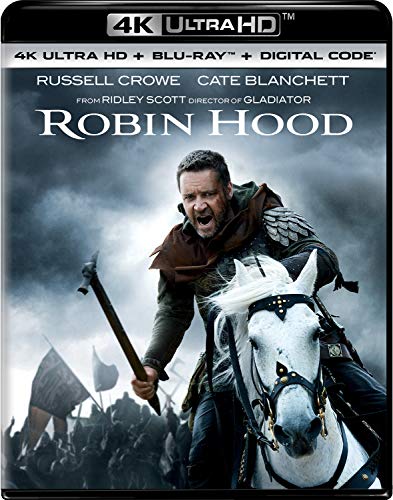 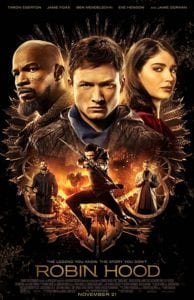 Robin Hood begins before the Crusades. Lord Robin of Loxley (Taron Egerton) lives in Nottingham and catches Marian (Eve Hewson) trying to steal from his estate. Instead of having her arrested, the couple begins a passionate love affair. However, their relationship is interrupted when the corrupt Sheriff of Nottingham (Ben Mendelsohn) drafts Robin into military service for the King of England. Robin is sent to fight the Saracens in the Crusades.

Four years later, Robin is a hardened warrior and a deadly archer, but he has become disillusioned with the war. He grows tired of death, both the loss of his comrades and of the enemy. Robin’s commander, Guy of Gisbourne (Paul Anderson), attempts to coerce information from an injured Saracen known as Yahya ibn Umar (Jamie Foxx) by threatening to kill the Saracen’s son. Robin stops the execution initially, but Guy puts an arrow into Robin’s stomach and kills the boy anyways. Guy orders his troops to send Robin back to Britain after the incident.

Once back in Nottingham, Robin learns that from his old friend Friar Tuck (Tim Minchin) that Robin was declared dead two years prior by the Sheriff. As a result, all of Robin’s land and wealth were seized by the Sheriff to continue to fund the war effort. Robin also finds that many of the citizens of Nottingham have been exiled from the city and live in the coal mine town across the river. The citizens secretly plot to revolt against the government and the church that oppresses them. Even worse, Robin learns that Marian is now involved with the rebellious groups aspiring leader, Will Tillman (Jamie Dornan).

When Robin sees Marian, he rushes to see her, but is stopped by Umar who has followed Robin to Nottingham. Umar tells Robin that he was moved by the Britain’s attempt to save his son and admired his bravery. Umar, whose name translates to John, proposes that he and Robin work together to end the war by stealing the money taken from the people to fund the church’s war. He also convinces Robin that it would put Marian’s life in danger if he renewed his relationship with her while they were pursuing their mini insurrection. Robin reluctantly agrees and avoids Marian on multiple occasions when she begins looking for him after the word of his return has spread.

Robin begins a grueling training program with John despite being a gifted archer. Once his skills are advanced enough, he begins stealing money from the Sheriff’s various taxing programs, causing the corrupt lawman to post a reward for “The Hood”. At the same time, Robin resumes his title of Lord of Loxley in high society and begins courting the Sheriff’s favor to discover the lawman’s true agenda. Robin attends one dinner where Cardinal Franklin (F. Murray Abraham), the head of the local church, makes an appearance. The Sheriff invites Robin into a secret meeting with the Cardinal. Robin learns that the war is a ploy of the church, which is also funding the Saracen army, to defeat the King and claim total power after his death. However, the “Hood’s” robberies have severely depleted the war funds and the Cardinal pushes the Sheriff to acquire the necessary funds to continue their operation.

The Sheriff orders Gisbourne and his men to raid the mining settlement and gather as much gold as possible. Additionally, he wants his hired sword to locate and kill the “Hood”. Robin intervenes to stop them. Marian also attempts to stop the soldiers despite Will’s objections that she stay out of it. She crosses paths with Robin and realizes that the “Hood” is her former lover. Robin works to avoid Gisbourne and his men and save Marian. During the escape, John is captured, but Marian and Robin are able to get away. John is taken back to the castle and tortured by the Sheriff, but he does not give up Robin’s identity.

Robin and Marian return to the mining community and attempt to rally the townspeople to fight. Will tries to calm everyone down. Robin reveals his identity as the “Hood” to the commoners, who embrace him as their leader. Will agrees to join Robin’s plan and leads a riot to distract the Sheriff’s men while Robin steals the Sheriff’s gold from his caravan. The plan escalates into an all-out battle with the Sheriff’s men. During the battle, Robin and Marian share a kiss, which is witnessed by Will. Will is temporarily distracted by what he sees and is caught in an explosion that scars him. Injured, but not dead, Will abandons Robin and Marian’s plan.

The Sheriff’s men begin to overpower the townspeople, so Robin surrenders himself to avoid further bloodshed. He is taken to the Sheriff’s castle to be executed. Just prior to his execution, Robin notices one of the Sheriff’s guards only has one hand. John, who has escaped his cell, reveals himself and kills the Sheriff’s other guards with the assistance of Robin. He and Robin hang the Sheriff by a chain in his castle. They flee the castle and reunite with Marian and the townspeople who are now hiding in Sherwood Forest with all the gold they have stolen.

Back in Nottingham, the Cardinal approaches a disillusioned Will and offers him the job as Sheriff of Nottingham if he will swear his loyalty of the church. Will takes the job and adopts the name of Will Scarlett. He announces a reward for Robin and his followers in the public court yard. The film ends with Robin shooting the proclamation out of Will’s hand with an arrow.