In the not too distant future, Detroit has become a city plagued by crime and financial mismanagement. The Omni Consumer Products (OCP) corporation takes over the police department in exchange for the opportunity to revitalize the crumbling city. They develop a program that would create a police cyborg to fight crime and help restore order to the crime ridden city. However, OCP needs a “volunteer” to further develop their program. That is until young Detroit Police Officer Alex Murphy encounters crime boss Clarence Boddicker where Murphy’s life is forever changed, and he becomes RoboCop, the future of law enforcement. 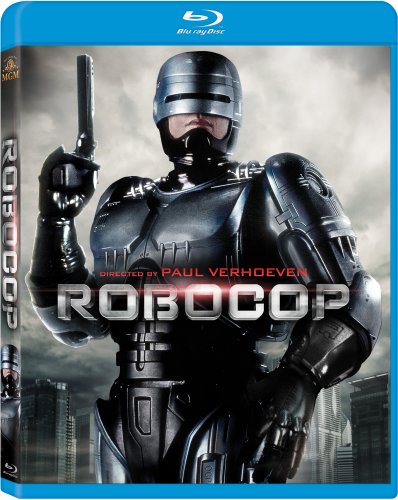 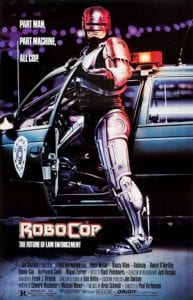 RoboCop begins in a near future Detroit. The city is on the verge of collapse due to the escalating crime rate and a city government that has mismanaged public funds. To shore up both problems, the city signs a deal with the Omni Consumer Products (OCP) corporation to run the Detroit Police Department. In exchange, OCP is given the opportunity to tear down and rebuild run down sections of the city into lavish and expensive buildings of the modern era. However, OCP needs to get crime under control to do this.

OCP Senior Vice President Dick Jones (Ronny Cox) plans to introduce a new law enforcement robot, ED-209, into the community to fight crime. However, the robot malfunctions during its initial presentation to the head of OCP, an executive referred to in reverence as the Old Man (Dan O’Herlihy). ED-209 kills one of the other executives in the demonstration. Bob Morton (Miguel Ferrer), a young but ambitious junior executive, uses the opportunity to propose his experimental cyborg design, known as RoboCop, as an alternative to ED-209. The Old Man approves Morton’s plan which displeases Jones.

Meanwhile, Detroit Police Officer Alex Murphy (Peter Weller) has been transferred to Metro West, a division in one of the run-down areas of Detroit. He is partnered with veteran officer Anne Lewis (Nancy Allen) who takes him out to show him the ropes of his new assigned patrol area. During their first day, the two officers respond to an armed robbery committed by the gang of the notorious criminal Clarence Boddicker (Kurtwood Smith). The two sides engage in a rolling gun fight on the streets of Detroit before Boddicker’s group escapes by throwing one of their own onto the patrol car, causing Lewis to slam on her brakes.

Murphy and Lewis follow the gang to an abandoned factory district where the officers split up to find Boddicker and his gang. Lewis is knocked unconscious when she is thrown off a ledge by gang member Joe (Jesse D. Goins). Murphy kills one of Boddicker’s men and attempts to place another, Emil Antonowsky (Paul McCrane), into custody. However, the rest of the gang, including Boddicker, arrive and torture Murphy. They shoot him multiple times, including shooting off his right hand and arm, before Boddicker shoots Murphy in the head. Amazingly, Murphy survives, although his wounds are fatal. Ultimately, Murphy dies at the hospital, but OCP takes possession of his body to continue with the RoboCop program.

Most of Murphy’s body is scrapped, but the officer’s head and face are combined with a new cyborg body and a computer mind. Dubbed RoboCop, the new cyborg officer is given three main directives: serve the public trust, protect the innocent, and uphold the law. RoboCop is given a fourth directive as well, but it is classified, even from the cyborg himself. RoboCop is assigned to Metro West, where he immediately has an effect on crime and begins to restore the public confidence. However, RoboCop begins to remember some of Murphy’s memories despite his mind allegedly being wiped by OCP.

After having a particularly vivid dream of Murphy’s death, RoboCop returns to the streets suddenly and encounters Emil. The gang member recognizes RoboCop from one of the phrases that the cyborg uses, which further drives RoboCop’s curiosity as to his past life. After arresting Emil, RoboCop researches the gang member’s known accomplices, which leads him to information about Boddicker and Murphy’s “death”. Additionally, Lewis recognizes RoboCop as her former partner and tries to make a connection with the man in the machine.

Meanwhile, Morton and Jones begin to jockey for power at OCP. RoboCop is a huge success and a public relations bonanza. However, Jones does not like the program and wants to push ED-209 to the forefront again due to the potential military applications of the machine. One night, Jones sends Boddicker, who secretly works for Jones, to Morton’s house to kill the junior executive. Boddicker shoots Morton several times in the legs, and then blows him up with a grenade.

Shortly afterwards, RoboCop tracks Boddicker and his gang down at a cocaine factory. RoboCop takes out most of the criminals in the factory and throws Boddicker through several windows. The gang leader gives up the information that he works for Jones in the hopes that it will prevent the cyborg from killing him. Ultimately, RoboCop arrests the heavily damaged Boddicker. After dropping the gang leader off at Metro West, RoboCop goes to OCP to arrest Jones. However, when he attempts to do so, the classified fourth directive is revealed.

The fourth directive is an addition by Jones which prevents RoboCop from making an arrest of a senior officer of OCP. Any attempt to do so results in shutdown. Jones gloats and admits to having Morton killed while Robocop struggles to remain active. Jones brings in an ED-209 unit to kill RoboCop, but the cyborg escapes to the parking garage. Once there, RoboCop is confronted by the Detroit Police Force who are ordered to destroy him. The police open fire, further damaging RoboCop. Lewis arrives and helps RoboCop escape the garage and takes him to the abandoned factory district. Once there, RoboCop and Lewis begin making repairs on the cyborg.

Back in Detroit, the police go out on strike, angered over being underfunded and short staffed by OCP. Jones has Boddicker and his men freed from jail, and tasks them with destroying RoboCop. Jones provides them with high tech weapons and a tracker system for the cyborg. The four surviving members of the gang go to the factory district, but they are each killed by either RoboCop or Lewis. Lewis is severely wounded but survives.

Afterwards, RoboCop returns to the OCP headquarters to arrest Jones again. After destroying an ED-209 unit guarding the building with one of Boddicker’s high tech weapons, RoboCop interrupts a board meeting where the Old Man and Jones are in attendance. RoboCop announces that Jones is responsible for Morton’s death and plays Jones’ video confession. Jones grabs a gun and takes the Old Man hostage. RoboCop is powerless to stop Jones until the Old Man suddenly yells that Jones is fired. Jones’ sudden termination allows RoboCop to draw his gun and kill Jones, who falls out a broken window. The Old Man thanks RoboCop for saving his life and asks the cyborg for his name, to which RoboCop replies “Murphy”.