In the futuristic world of 2018, corporations have replaced countries. To distract and control humanity, they created a violent gladatorialesque game called Rollerball to demonstrate the futility of individual effort. However, the Energy Corporation soon begins to fear the popularity of its top player, Jonathan E because of his individual efforts. They decide it’s time for him to retire one way or the other before he inspires others to follow suit. 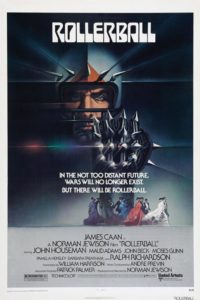 Jonathan E. (James Caan) plays on Houston’s Rollerball team. As its captain, he’s become the sport’s most recognizable player lasting a ridiculous decade without someone killing him in match play.

After an impressive win against Madrid, Mr. Bartholomew (John Houseman), a chairman of the Energy Corporation which owns Houston, pops in the locker room to congratulate the men and to announce he’s going to have Jonathan featured in retrospective broadcast about his career.

The next day he meets with Jonathan where he tells him that the Energy Corporation intends to use that broadcast to announce Jonathan’s retirement. He will give Jonathan an excellent retirement package once he makes the announcement. Jonathan is confused and unconvinced.

Mr. Bartholomew then begins spewing propaganda as to why corporations running society is beneficial for all, but he never elaborates on why Jonathan must retire. Jonathan balks at the notion. He wants to see his ex-wife Ella (Maud Adams), whom the corporation took away from him because another corporate executive who wanted her for himself.

Suspicious that someone is trying to force him out, Jonathan goes to a library with his best friend and up-and-coming teammate, Moonpie (John Beck); looking for books about the Energy Corporation and its history. However, the clerk in the library (Nancy Bleier) tells him that the corporations have had all books digitized and edited to suit their needs, BUT the world’s original books are stores on a supercomputer in Geneva.

Later, Jonathan meets with his old coach and good friend, Cletus (Moses Gunn), who is now an Energy executive, to ask for some information. Cletus says the Executive Committee is afraid of him, but he doesn’t know why.

Next the Energy Corporation has the Rollerball rules changed in hopes of forcing Jonathan to retire or be retired. With no penalties and limited substitutions, Houston’s game against Tokyo devolves into senseless violence. Players from both sides die during the bout. Three of Tokyo’s players gang up on Moonpie and render him braindead. Despite the death, Houston lives on to play New York for the world championship.

After the match, Jonathan visits Moonppie at a Tokyo hospital. Although he’s in an irreversible coma Jonathan refuses to sign the paper the doctor (Burt Kwouk) pressures him to sign; turning off his life support. Instead, Jonathan has Moonpie flown back to Houston for further medical care.

Meanwhile, Mr. Bartholomew meets with the Executive Committee via teleconference to discuss the Houston/New York game. They decide the match will have no penalties, no substitutions, and no time limit. Mr. Bartholomew openly hopes that someone from New York will retire Jonathan during the match because Rollerball was created to demonstrate the futility of individual effort. Jonathan’s ten-year popularity threatens this belief.

By now, Jonathan’s made his way to Geneva to access the world’s central supercomputer, named Zero. While society believes it’s the repository of all human knowledge, Jonathan learns that Zero’s memories are lost and/or corrupted; including losing the entire 13th Century. While Jonathan wants to find out how the corporations make their decisions, Zero gives him nothing more than gibberish; exposing how fragile digitized knowledge is.

Once home, Jonathan watches a cherished recording between him and Ella when she suddenly pays him a visit. The Energy Corporation has sent her to convince him to retire and make it known that his upcoming match with New York will be to the death. Jonathan correctly figures the Corporation’s executives set up her visit, and he erases the movie in front of her because he knows she’s not on his side. Jonathan then doubles down on his decision to play.

We cut to the climatic match between Houston and New York for the championship. Players begin dropping one after the other. As the death toll mounts, the crowds enthusiasm turns to quiet disbelief.

Soon all of the players are either dead or injured to the point of being unable to continue in the match except for Jonathan and two New York players; a skater and a bikeman. Jonathan violently kills the skater in front of Mr. Bartholomew’s box, and takes the ball from him. When the bikeman tries to get the ball, Jonathan knocks him off his bike. He pins the bikeman on the floor of the Rollerball rink. As Jonathan raises the ball over his head to kill him, he stops himself. Instead he rises to his feet and painfully skates to the goal. He slams the ball home; scoring the match’s only point for the win.

With the crowd in stunned silence, Jonathan incredulously skates around the track. Coaches and fans of both teams begin to chant his name. Softly at first, then louder as he’s inspired to skate faster. Mr. Bartholomew angrily leaves the arena before any riots occur. Jonathan then skates towards the camera to an unknown future.