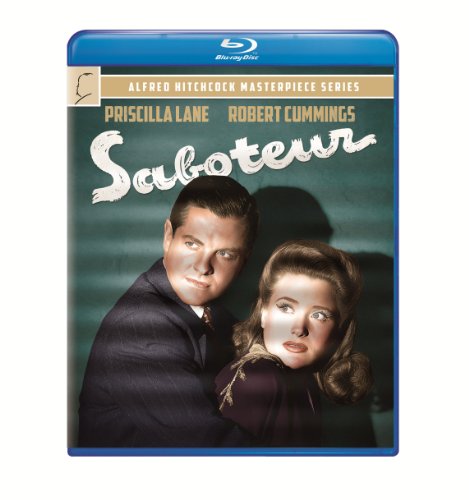 Universal Pictures Home Entertainment has announced that they are releasing Saboteur onto Blu-ray this July. The film is directed by Alfred Hitchcock and stars Priscilla Lane, Robert Cummings, Otto Kruger, Norman Lloyd, Alan Baxter, and Clem Bevans. Saboteur will be available online and in stores beginning July 2, 2013.

This riveting wartime thriller stars Robert Cummings as Barry Kane, a Los Angeles aircraft factory worker who witnesses a Nazi agent firebombing his plant. However, it is Barry who is accused of the fiery sabotage, and to clear his name he sets off on a desperate, action-packed cross-country chase that takes him from Boulder Dam to New York’s Radio City Music Hall to the top of the Statue of Liberty. Hitchcock’s first film with an all-American cast moves with breakneck speed toward its final heart-pounding confrontation and it remains a suspense classic.

Disclaimer: Affiliate links are contained in this post. This means when you click a link, and purchase an item, Movie House Memories will receive an affiliate commission. Advertisers and Affiliate Partnerships do not influence our content. See our Terms of Use about the inclusion of affiliate links on this site for more information.
April 7, 2013
1 minute read
Show More
Back to top button
Close
Close