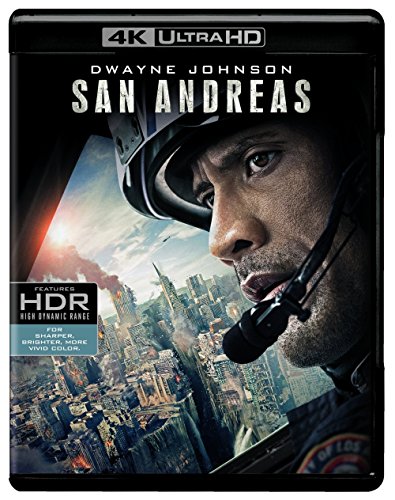 Warner Bros. Pictures and Village Roadshow Studios have officially announced that they will be bringing their disaster film San Andreas to Blu-ray this fall. The film stars Dwayne Johnson, Alexandra Daddario, Carla Gugino, Colton Haynes, Ioan Gruffudd, and Paul Giamatti. San Andreas is directed by Brad Peyton and is based on the screenplay by Carlton Cuse and story by Andre Fabrizio and Jeremy Passmore.

San Andreas will be available for purchase online or in stores in either 3D or 2D Combo Packs beginning October 20th.

After the infamous San Andreas Fault finally gives, triggering a magnitude 9 earthquake in California, a search and rescue helicopter pilot (Dwayne Johnson) and his estranged wife make their way together from Los Angeles to San Francisco to save their only daughter. But their treacherous journey north is only the beginning. And when they think the worst may be over…it’s just getting started.

Warner Bros. Pictures and Village Roadshow Studios have announced that both the 3D and 2D Blu-ray Combo Packs will include several special features including:

Here is the theatrical trailer for San Andreas, courtesy of MOVIECLIPS Trailers.

Disclaimer: Affiliate links are contained in this post. This means when you click a link, and purchase an item, Movie House Memories will receive an affiliate commission. Advertisers and Affiliate Partnerships do not influence our content. See our Terms of Use about the inclusion of affiliate links on this site for more information.
July 16, 2015
361 1 minute read
Show More
Subscribe
Login
0 Comments
Inline Feedbacks
View all comments
Most Recent Posts
Facebook Twitter LinkedIn Tumblr Pinterest Reddit
Back to top button
Close
wpDiscuz
0
0
Would love your thoughts, please comment.x
()
x
| Reply
Close