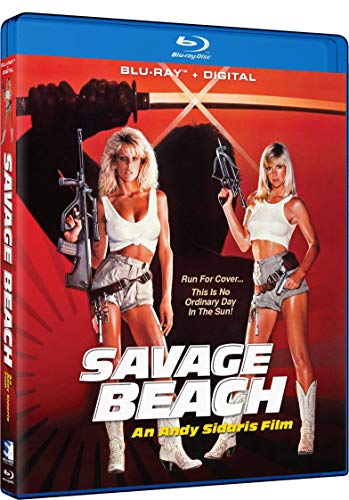 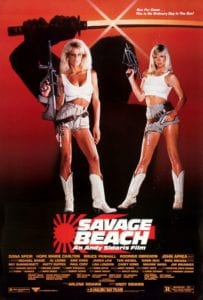 Drug enforcement agents, Donna and Taryn, along with Rocky and Pattycakes, raid a narcotics smuggling ring in Hawaii. Afterwards, the girls celebrate with a topless dip in the hot tub in Molokai.

At a remote South Pacific Island called Knox Island, a storm is brewing, and sick kids are at risk. Dr. Santos calls Shane Abilene in Honolulu for help. Shane then calls the girls, and sends Donna and Taryn to Knox Island to deliver the needed medical supplies and vaccines. Shane flies into Molokai to give them final instructions and weapons before they can leave.

Meanwhile in Honolulu, Rodrigo Martinez, from the Philippine government, voices his concerns to U.S. Naval Captain, John Andreas, about the overdue return of some lost gold the Japanese stole from them in WWII. He convinces the Captain to use a government reconnaissance satellite to locate the sunken ship that purportedly has it.

Back in Molokai, Shane gives the girls radio instructions on where to land their plane once they arrive to Knox. We then see a mysterious man in Honolulu knock out U.S. Army Major Harrison in a government car. The man assumes the identity of the Major for some unknown reason.

In Japan, from his deathbed, the elderly Admiral Kenji Inada gives two Japanese agents the details of what he knows about the Philippine gold in a flashback scene. The agents use the info to help the U.S. Navy locate the lost ship with it.

The girls make it to the hospital, and drop off the needed supplies during a torrential tropical storm (although the sun shines brightly). They quickly refuel, and take off into the rain.

We cut to the desert (maybe outside Las Vegas) where Martinez meets with Paul Michaels, a computer programmer who managed to steal the Navy’s Top Secret floppy disk with the shipwreck’s whereabouts. Martinez pays him for the disk, and then watches from his car as a bomb detonates in the briefcase he gave to him that was supposed to contain the money for the disk.

Back in the plane, the girls get topless and dry off was the storm rages around them. We now cut to the Diamond Head Beach Hotel in Honolulu where Martinez has suddenly returned, and he celebrates with Anjelica in hopes the gold will soon be theirs. They bang for the good of the Philippine party.

We cut back to Donna and Taryn, and they become lost after lightening hits the plane, and knocks out the navigation.

Meanwhile, the Japanese agents arrive in Honolulu where Anjelica tails them to their hotel. She has her goons Fu and Erik attack, kill, and then assume their identities to make a copy of their floppy disk.

By this time, Donna and Taryn’s plane is out of gas. They crash land on an unknown island.

We cut back to Fu and Erik who arrive at the Naval base. They give the Navy their copied disk who cross reference it with the other disk, and deduce the ship is on a remote island with a savage beach… oddly, it’s the same island Donna and Taryn just crashed on.

At a hanger, Martinez meets Major Harrison and Captain Andreas as they prepare a plane to the island. Cut back to the girls on the island, and they set up camp, and then get naked for a playful romp in the ocean.

Back on Molokai, Rocky and Pattycakes get topless, and then change into something comfortable to meet Shane where he tells them the girls’s plane disappeared.

Donna and Taryn forage for food, but when Donna spots human foot prints, she gets a bit nervous. After they head back to camp to figure out where they are, the savage samurai attacks Taryn, and Donna scares him off with a flare gun.

Once the girls fall asleep, paranoia makes them think the samurai is attacking them again, but it’s just a rooster in the bushes, and they blow it to bits. They decide to find the samurai before he finds them, and the hunt is on, but the samurai has boobie trapped the island, and Taryn is snared in a rope. The samurai revealed himself, and he’s the same man from Admiral Inada’s flashback. Apparently, for the last forty years, he’s been on the island protecting the gold.

Martinez, Major Harrison, and Captain Andreas arrive on the island to retrieve the gold. Donna and Taryn spot them, and then follow them to see what they are up to. Meanwhile, Anjelica, Fu, Erik, and two others arrive off the island’s coast on a boat. Captain Andreas captures the girls, and he, Martinez, and Harrison tie them up at gunpoint.

Anjelica lands on the island with her goons as Martinez finds the gold. While the three men dig it up, the samurai frees the girls, and returns to the dig to watch Martinez, Harrison, and Andreas. Anjelica’s group show up where Erik and Fu kill her while she and Martinez kiss.

They capture Martinez, Harrison, and Andreas to take the gold for themselves. The samurai shows up and kills one of the thugs. Harrison and Andreas run off, but the girls capture them. The four team up to take out Martinez, Fu, and Erik.

Fu and Erik take down Harrison and Andreas, but Donna shows up with her gun. She shoots Erik, and the chase is on. Martinez returns to the gold and takes it, and then shoots another thug when he tries to stop Martinez. Martinez then runs off, and Taryn blows him (and his little boat) up with her explosive arrow. The gold sinks into the lagoon’s waters. Fu captures Taryn, and threatens to kill her, but the samurai shows up and stabs him with his sword as the thug shoots him.

Both men die, but the samurai manages to tell one final story before dying of how he and his two comrades murdered three Americans on the beach one day to protect the gold. They immediately regretted it, and one killed himself over it. The other drowned himself in the ocean, and he, the samurai, lived as an animal until everyone showed up on the beach that very day. His final sacrifice to save the girls was to atone for his sins.

The girls take off the in Harrison’s plane as Harrison and Andreas wait on the island for the Naval ship to arrive to pick them and the gold up. Everyone will then in Molokai.

However, after the girls take off leave, Harrison reveals himself to actually be CIA agent Bruce Christian, and the government will be picking up the gold; not the Navy. He and Andreas commandeer Anjelica’s boat and sail back to Molokai where they meet up with Donna, Taryn, Rocky, Pattycakes, and Shane for a bunch of happy endings.