Director Wes Craven returns to the genre that made him famous. A year after her mother’s death, teenage Sidney Prescott and her friends begin receiving strange, ominous phone calls from a person who threatens to kill them. After one teenage girl is killed, the police struggle to discover who is responsible, focusing first on Sidney’s boyfriend Billy and then Sidney’s father. As the media begins to swarm over the story, Sidney struggles to trust everyone around her as they all potentially could be the killer. 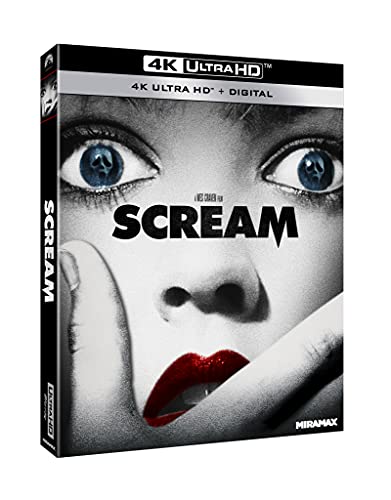 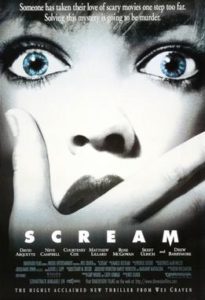 Teenage Casey Becker (Drew Barrymore) receives a mysterious phone call from a stranger while she is at home alone on a weekend night. The caller is initially friendly, discussing the joys of horror movies and popcorn with Casey. However, the conversation turns dark when the caller implies that he is watching Casey who is waiting for her boyfriend, Steve Orth (Kevin Patrick Walls), to arrive. The caller threatens her life and the life of Steve, who is tied up in the backyard, unless Casey agrees to play a game with the caller where Casey answers questions about horror films. After Casey gets a question wrong, Steve is murdered in front of her. When Casey refuses to answer any additional questions, a masked assailant jumps out and kills her. A short time later, Casey’s parents return home to find her disemboweled body hanging from a tree.

The next day, a media frenzy descends upon the town as the police investigation begins. Casey’s classmate, Sidney Prescott (Neve Campbell), is struggling with both Casey’s death and the first anniversary of the death of her mother, Maureen (Lynn McRee). Maureen was murdered by her lover Cotton Weary (Liev Schreiber) although Weary has always claimed that he was framed for the crime. While waiting at home for her friend Tatum Riley (Rose McGowan), Sidney receives a taunting phone call from the same mysterious caller as Casey. Sidney argues with the caller before hanging up suddenly on him. Once she hangs up, she is attacked by the killer, but successfully evades him. Sidney’s boyfriend, Billy Loomis (Skeet Ulrich), arrives shortly afterwards, but after he drops his cell phone, Sidney suspects Billy is her attacker and flees. Billy is arrested by the police, and Sidney spends the night at Tatum’s house where she receives another threatening phone call.

The next day, Billy is released from jail due to the second call. The police investigation shifts to Sidney’s missing father Neil Prescott (Lawrence Hecht) as the calls have all been traced back to his phone. Due to the attacks on Sidney and Casey’s death, school is suspended. The school principal Mr. Himbry (Henry Winkler) is attacked and killed by the ghost faced killer.

Later that day, Tatum’s boyfriend Stu Macher (Matthew Lillard) decides to throw a party that night to celebrate the school’s closure. Sidney, Tatum, their friend Randy Meeks (Jamie Kennedy), and many other students attend the party. Reporter Gale Weathers (Courteney Cox) shows up at the party uninvited to cover the story, believing that the killer will strike at the teenagers. Tatum’s goofy brother, deputy sheriff Dewey Riley (David Arquette), also watches over the party and Gale, so that the teenagers are safe. The teenagers drink and watch horror movies, stopping to comment frequently about the rules of surviving a horror movie. During the night, Tatum goes into the garage alone and is murdered by the killer who crushes her neck with the garage door.

Billy comes to the party alone. He and Sidney have a conversation where Sidney apologizes for accusing him of being the killer. They sneak away privately, and Sidney loses her virginity when they have sex together. At the same time, news of Himbry’s murder at the school causes many of the party goers to leave. Only Sidney, Billy, Randy, Stu, and Gale’s camera operator Kenny Jones (W. Earl Brown) are left in the Riley house. After having sex, Sidney and Billy are confronted by the killer, who attacks Billy. Sidney escapes from the house and seeks help from Kenny. However, the killer slashes Kenny’s throat, killing him.

Meanwhile, Dewey and Gale investigate the area around the Riley house. They discover Neil Prescott’s abandoned car nearby. They make their way back to the house. Gale tries to escape the area in her news van but drives off the road to avoid hitting Sidney and crashes. Dewey enters the Riley house and is stabbed in the back by the killer. Sidney returns to the house where she finds Billy wounded but still alive. Sidney gives Billy the gun before he lets Randy into the house. Billy shoots Randy and reveals that he faked his injuries and is the actual killer. Stu then appears and admits to being Billy’s accomplice. Billy and Stu discuss their plan to kill Sidney and to frame her father, whom they have taken hostage. The pair also reveal that they murdered Sidney’s mother and framed Cotton for it. Billy states that he did it as revenge for Sidney’s mother having an affair with his father, which resulted in his mother leaving the family.

Suddenly, Gale reappears and intervenes. Sidney takes advantage of her sudden appearance to knock Billy out with an umbrella and to drop a television set on Stu’s head, killing him. Billy regains consciousness quickly and attacks Sidney, but Gale shoots him with the gun. Randy reappears and shows that he is merely wounded. He tells Sidney that the killer in horror films always reappears for one last scare. Sidney takes the gun and shoots Billy in the head, killing him for good. As the sun begins to rise, the police arrive and begin to pick up the pieces. A wounded Dewey is taken away by ambulance and Gale makes an impromptu news report about the night’s events.