In the first sequel to the original film, two years have passed since the Woodsboro Massacre. Stab, a film portraying the events of the massacre is being released into theaters and a new Ghostface killer surfaces to kill a couple of Windsor College students. Sidney Prescott and Randy Meeks, two of the survivors of the first film, both attend Windsor College and soon find themselves being stalked by the new killer. As the body count rises, fellow Woodsboro survivors, Gale Weathers and Dewey Riley both arrive to help Sidney. But will their luck hold out for a second time?

*As an Amazon Associate we earn from qualifying purchases. 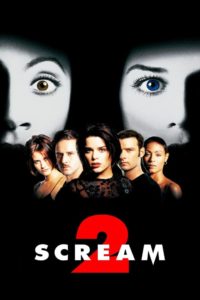 Two years have passed since the events of the first film. Stab, a film about the events of the Woodsboro Massacre and based on a book written by Gale Weathers (Courteney Cox) is being released. Two Windsor College seniors Maureen Evans (Jada Pinkett Smith) and Phil Stevens (Omar Epps) debate the relevance of horror films as the Casey Becker (Drew Barrymore) murder scene is portrayed on the screen with Heather Graham (Heather Graham) playing Becker. Phil steps away to use the bathroom and is murdered by a Ghostface killer. Ghostface puts on Phil’s jacket and sits next to Maureen during the movie. He stabs Maureen in the crowded theater and the audience mistakes it for a publicity stunt even as Maureen dies in front of the movie screen.

The next day, the media descends on Windsor College where first film survivors Sidney Prescott (Neve Campbell) and Randy Meeks (Jamie Kennedy) both attend. Sidney has attempted to move on with her life, moving in with roommate and best friend Hallie McDaniel (Elise Neal) and acquiring a new boyfriend Derek Feldman (Jerry O’Connell). Sidney tries to avoid the media spotlight, even when it comes in the form of fellow survivor, Gale. Gale tries to stage a confrontation between Sidney and Cotton Weary (Liev Schreiber), the man who was wrongly convicted for the death of Sidney’s mother, Maureen Prescott. Sidney hits Gale, and Cotton becomes upset with Gale after he learns that Gale was surprising Sidney with the interview. Dewey Riley (David Arquette) also shows up at the college to protect Sidney and Randy.

Later that night, Sidney and Hallie attend a party at a sorority house. At a nearby sorority house, a young girl Cici Cooper (Sarah Michelle Gellar) is killed by Ghostface. As the police arrive, the party that Sidney is attending begins to empty out. Ghostface shows up and attacks Sidney until Derek intervenes. Ghostface injures Derek but gets away before the police arrive. Later, Gale uncovers that Cici’s real first name is Casey and theorizes that the new Ghostface killer is targeting students with the same names as the Woodsboro murder victims. At the same time, Randy explains to Dewey the rules of horror movie sequels and theorizes that the killer is likely someone Sidney knows.
Gale, Dewey, and Randy discuss possible suspects when Gale receives a phone call from Ghostface. Randy talks with the killer who implies that he can see them. Gale and Dewey search the nearby area for someone on their phone while Randy works to keep Ghostface talking. While Gale and Dewey are away, Ghostface drags Randy into the back of Gale’s news van and kills him.

As night falls, Dewey and Gale theorize that the killer might be in the background of Gale’s news footage. As they are examining video tapes, they are attacked by the Ghostface killer. Dewey is stabbed in the back again, but Gale manages to escape. At the same time, Sidney breaks up with Derek, believing that he might be the killer. The police decide to move Sidney and Hallie to an undisclosed location. However, Ghostface murders the police officers while in route. Sidney and Hallie manage to briefly escape, but Ghostface kills Hallie a few moments later. Ghostface chases Sidney back to the college campus.

Sidney tries to hide in the campus theater. She finds an intoxicated Derek tied to a cross on the stage. She tries to untie him until Ghostface arrives. The killer reveals himself to be Mickey (Timothy Olyphant), Randy’s friend and fellow film student. Mickey shoots Derek, killing him. Mickey tells Sidney that he intends to kill her and allow himself to be arrested so he can blame violence in movies for the murders at the trial. Mickey introduces Debbie Salt (Laurie Metcalf) as his accomplice. Salt is really Mrs. Loomis, the mother of Billy Loomis, one of the killers from the first film. Mickey explains that Mrs. Loomis has been paying for his tuition in exchange for his help. Mrs. Loomis tells Sidney that she is seeking revenge for Sidney killing her son. Mrs. Loomis has also captured Gale and brought her to the theater.

Mrs. Loomis betrays Mickey and shoots him in the chest. As Mickey is collapsing, he shoots Gale who falls into the orchestra pit. Sidney and Mrs. Loomis fight over a gun and a knife. Cotton arrives and picks up Mickey’s gun. While Mrs. Loomis holds a knife to Sidney’s throat, Loomis tries to convince Cotton to allow her to kill Sidney so that he can become the star. Sidney agrees to share an interview with Cotton with Diane Sawyer. Cotton shoots Mrs. Loomis in the throat. Gale reveals that she is still alive. Mickey suddenly resurfaces and Gale and Sidney shoot him dead. Sidney turns to Mrs. Loomis and shoots her in the head to make sure she is dead.

The next morning, the police arrive to pick up the pieces. Dewey is still alive and being taken to the hospital. Instead of doing a news story about the killings, Gale climbs into the ambulance with him. When questioned by the press, Sidney directs them to Cotton, telling them that he is the true hero. Cotton finally gets the fame and attention that he has been seeking as Sidney leaves the university campus.