It has been four years since the events of the first Scream film. A Hollywood studio is making Stab 3, a fictional sequel to the events of the first two Scream films. When Ghostface resurfaces and begins killing people associated with the film, Sidney Prescott comes out of hiding to help her friends Dewey Riley and Gale Weathers investigate and stop the new murders. However, the key to the killer’s identity may lie in an unknown portion of Sidney’s past as the sins of her mother, Maureen, come back to haunt her. 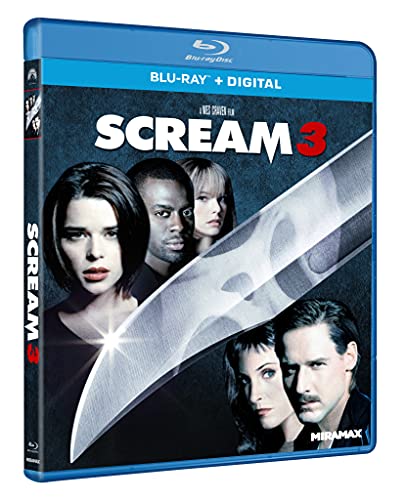 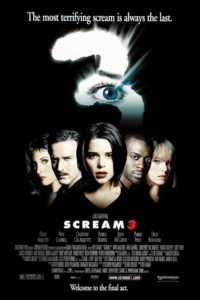 Scream 3 begins in Los Angeles where Cotton Weary (Live Schreiber) now lives and works as the host of a successful television talk show, 100% Cotton. He receives a phone call from Ghostface (Roger L. Jackson) who demands that Cotton reveal the whereabouts of the reclusive Woodsboro Murders survivor Sidney Prescott (Neve Campbell). Cotton refuses and Ghostface threatens to kill Cotton’s girlfriend Christine (Kelly Rutherford). While Cotton rushes home to save his girlfriend, Ghostface chases Christine through their house and uses a voice box that includes Cotton’s voice. Eventually, Cotton arrives and Ghostface kills both Christine and Cotton.

Police detective Mark Kincaid (Patrick Dempsey) is assigned to the murders and contacts Gale Weathers (Courteney Cox) to discuss the investigations. Gale flies out to Hollywood to find her story. Kincaid is questioning people on the set of Stab 3, the third, and truly fictional, film in the series based on the Ghostface murders. Cotton was making a cameo appearance in the film, so the police believe that the production maybe linked to the murders. Gale finds her ex-boyfriend and ex-police officer Dewey Riley (David Arquette) working as a technical adviser on the set. The movie crew is displeased to see media-whore Gale and promptly kicks her off the set where she has an immediate confrontation with Jay and Silent Bob (Jason Mewes and Kevin Smith) who are taking a backlot tour.

The next day, Ghostface kills Stab 3 actress Sarah Darling (Jenny McCarthy) on the set which results in the entire production being shut down. Similar to Cotton’s murder, the killer leaves an old photo of Maureen Prescott (Lynn McRee), Sidney’s mother, near the body. Kincaid pressures Dewey to reveal the location of Sidney, suspecting that she might have some insight into the killer’s identity. The cast gathers later that night at actress Jennifer Jolie’s (Parker Posey) house to mourn the shutdown in production. Jennifer is playing Gale in the new film and is also dating Dewey, which makes Gale jealous. Jennifer also has a bodyguard named Steven Stone (Patrick Warburton) who does not care much for Dewey. Ghostface shows up at Jennifer’s house and murders Steven and causes a gas leak that results in an explosion that kills actor Tom Prinze (Matt Keeslar). Dewey, Gale, Jennifer, and the remaining cast members are blown down the Hollywood hillside but survive the explosion.

Meanwhile, Sidney is living in the mountains where she keeps to herself on a large stretch of land. She works as telephonic crisis counselor for an abused women’s hotline. Sidney lives in fear of being the target of another psycho killer. She has dreams about Ghostface and her deceased mother. Ghostface uncovers Sidney’s location and begins making phone calls to her. Sidney comes out of hiding and heads to Los Angeles to see if she can share any information that could possibly stop the killer.

Once Sidney arrives in Hollywood, she and Dewey encounter Martha Meeks (Heather Matarazzo), the younger sister of Sidney’s friend Randy (Jamie Kennedy), who was murdered in Scream 2. Martha leaves them with a video that Randy made for them prior to his death. The video explains to them the rules of the third film in a horror film trilogy. He also warns them that in a third film, all previous rules do not apply and that anyone can be killed including a leading character, like Sidney. A short time later, Sidney is attacked on the set of Stab 3 when she is left alone in the recreation of her childhood house. Kincaid decides that taking Sidney back to the police station is the best way to protect her. At the same time, Gale and Jennifer work together to uncover that Maureen Prescott had previously tried to make a film career and had worked for John Milton (Lance Henriksen), the producer of Stab 3, years before.

Later that night, Dewey, Gale, Jennifer, and the remaining Stab 3 cast, Angelina Tyler (Emily Mortimer) and Tyson Fox (Deon Richmond), attend a birthday party for Stab 3’s director Roman Bridger (Scott Foley) at Milton’s gothic Hollywood mansion. Ghostface appears at the mansion and begins killing them one by one. Gale finds Roman’s dead body in a prop coffin in the basement. Angelina wanders off alone and is killed. Tyson tries to fight back against Ghostface and is thrown off a balcony to his death. Jennifer finds a secret passage within the walls of the mansion and tries to escape. However, she is killed by Ghostface before Dewey can shoot out the glass to save her. Ghostface captures Gale and Dewey and ties them up.

Ghostface calls Sidney at the police station and orders her to come to the mansion alone to save Gale and Dewey. Once at the mansion, Ghostface forces Sidney to throw away her gun and orders her inside the mansion. Sidney finds Gale and Dewey and works on untying them until Ghostface appears. The killer attacks her, but Sidney shoots him with a second hidden gun. Kincaid suddenly appears unexpectedly, and Sidney suspects that he maybe the killer. However, the real Ghostface appears and knocks Kincaid unconscious. Sidney runs and hides in Milton’s secret screening room.

Once in the screening room, Sidney is cornered by Ghostface who reveals himself to be Roman Bridger. Roman shows that he was wearing a bulletproof vest so that he could survive Sidney’s attack. He also reveals that he is Sidney’s half-brother, the abandoned son of Maureen Prescott. Roman reveals that he had tried to reunite with his mother four years prior, but Maureen had rejected him. Bitter, Roman filmed all of Maureen’s philandering and then shared the footage with Billy Loomis (Skeet Ulrich). Billy’s anger motivated him to kill Maureen and frame Cotton, and then set off the Woodsboro murders detailed in the first film. Roman expresses that he became jealous of the fame that Sidney received for surviving the murders in Woodsboro and Windsor College and formulated a plan to frame her for the murders connected to the Stab 3 production.

Roman kills Milton who is tied up in the film. Furious, Sidney tells Roman that he is responsible for all the events that have occurred, not her. The two engage in a short fight, but Roman ends the fight by shooting Sidney in the chest. Dewey and Gale attempt to enter the screening room and momentarily distract Roman. When Roman looks around again, he finds that Sidney’s body has disappeared. She appears again moments later and stabs Roman in the back and chest. She reveals that she too was wearing a bulletproof vest that she acquired from Kincaid’s office. Dewey and Gale make it into the screening room just as Roman jumps up with a knife. Dewey tries to shoot him in the chest, but Sidney orders Dewey to shoot him in the head, which he does, killing Roman.

Sometime later, Sidney is taking a walk near her mountain home. She opens her gates as she returns home, symbolizing that she is done hiding from the world. At Sidney’s house, Dewey proposes to Gale, who is finally ready to settle down with the love of her life. Sidney enters the home, and she, Dewey, Gale, and Kincaid all sit down to watch a movie.