Sea of Love takes place in Manhattan. Detective Frank Keller is a veteran cop with twenty years on the force, but he’s terribly lonely. His ex-wife, Denise, left him for a colleague from the same precinct named Gruber. When a man dies from a gunshot wound to the neck while the song, Sea of Love plays on an old 45; the P.D. places Frank in charge of the investigation. In time, a Detective Sherman joins Frank when his district finds a second victim with the same type wounds. Additionally, they learn the victims have something else in common. They wrote into a lonely hearts column for the New York Weekly. After a third death, Frank convinces his boss to let him go undercover with a submission to the magazine as well. However, Frank winds up falling in love with a woman named Helen Cruger. Once she becomes the investigation’s prime suspect, Frank has trouble putting his feelings for her aside. Thus jeopardizing the investigation. 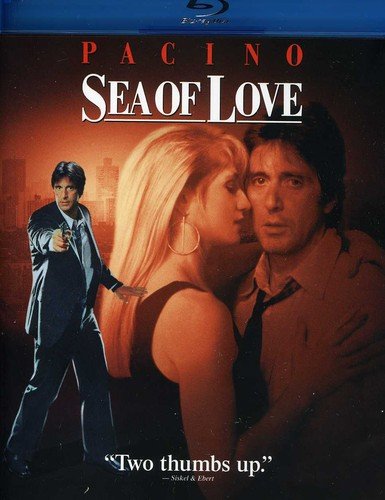 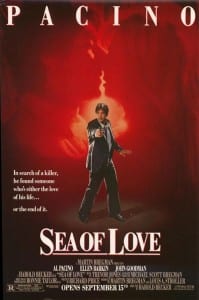 In the Sea of Love, Frank Keller is your cliché riddled, New York City homicide detective. He’s great at his job; constantly at odds with his supervisors, divorced, and of course, a raging alcoholic. His ex-wife seems to be a badge chaser, since she remarried another homicide detective with zero personality, which only seems to feed Frank’s depression about reaching middle age and his 20th anniversary as a police officer; his true mistress.

Between sessions of bellying up to the bar, Frank is assigned to investigate the murder of a man in Manhattan who has been found shot dead while face down in his bed, naked, listening to an old 45 record of “Sea of Love”. I know what you are thinking, must be a suicide by twerking, but Keller is not your ordinary detective, and this super sleuth immediately believes that this man was a victim of foul play, and not the laugh out loud kind that involves an albino, Goldie Hawn, or a warm cucumber. Keller finds three clues that support his theory. A lipstick-smeared cigarette, a want-ad that the dead man placed in a newspaper, and fingerprints of the perpetrator.

Keller’s theory of murder is eventually supported when he eventually meets Detective Sherman Touhey, a monster of a man, played by eternal 80’s side kick John Goodman. Touhey tells Keller that he is also investigating a man who died of in a similar manner in Queens. Touhey suggests that he and Frank collaborate on their investigations, and although everything about Frank screams “lone-wolf,” Keller agrees to join forces with the future King Ralph without hesitation. The drinking duo feel that their best chance of catching the killer is by placing rhyming ads in the lonely hearts column of the newspaper, seeking dates. An added bonus for Frank, he gets to drink for free and talk to a lot of women where his true charm shines.

The deceptive detectives place their ad, and begin their round robin of dates. The ploy is to trick the women into a date, offer them a drink, and collect their prints off their wine glasses; the same way I met my wife, but she was the one wearing a wire and arrested me. Frank has dinner with several women with the enthusiasm of a New York politician looking for his 3rd mistress. One woman, divorcee Helen Cruger, played by 80’s bombshell Ellen Barkin, shows no interest in Frank and leaves without touching her wineglass, but not before awkwardly overacting the scene. Since she left Frank in the restaurant, she must be a lesbian, and they write her off.

Shortly after the first round of dates, a witness played by someone who resembles a portrait of a serial killer, and states that he saw a young black man with corn rows running from the scene of Frank’s crime. It’s always the shady guy with the cornrows and not the loner white guy with anger management problems, isn’t it? Since they are only New York police officers who don’t bother to get the full names of anyone, including their witnesses or Helen, they can only conclude that their killer is a black male who is overly critical of white men’s twerking abilities.

Later, while Frank is shopping for one at the neighborhood market, he runs into Helen the lesbian again. This time, she is much friendlier. She must not be high on anything this time. She informs him that she manages a chic upscale shoe store, and simply dresses like a hooker in a bright red leather jacket for shits and giggles. Frank does not reveal his true occupation, because he’s a good guy who lies about everything. Feel sympathy for him yet? Frank agrees to have a drink with her. Why Helen wants to have one with him is beyond me, but both people seem to love making bad decisions.

Eventually, Frank takes Helen to his place; against his better judgment and a warning from The Babe not to do so. By the way, as Coach Harris is giving him some non-nerdy advice, Helen is talking on the phone next to Frank. Hey Frank, have Dan Connor get a cop to swoop by and finger print that phone for you. Nah, Frank’s other head is doing the thinking now, and they all end up at his place where they start getting passionate, but Frank panics after seeing a gun in her purse, and treats her roughly. The gun turns out to be just a starting pistol, but fortunately for Frank, Helen is into the rough stuff, and gives Frank a nice reach around before fucking his brains out.

Frank and Helen begin a romance because they are that damaged. Frank has a chance to obtain Helen’s fingerprints on a glass and just about everything in his bedroom and kitchen, but she is a good lay, so he decides to wipe the glass clean. However, their relationship becomes strained when she discovers that he is a cop. Go figure — a woman who doesn’t react well when she finds out that you lied to her, but Frank really likes having sex with Helen. Did we mention this? He’s wallowing in his own sea of love, so his feelings for her must be real, right? Unfortunately, Frank discovers that Helen responded to each of the homicide victims’ ads. That whore! When he confronts her, Helen refuses to admit to anything, so he throws her out.

Later, Helen’s ex-husband Terry forces his way into Frank′s apartment. You remember him, right? Terry is the nice young man who led police to believe that it may have been a black man who committed the murders earlier in the film, but apparently no one IN THE ENTIRE NYPD HOMICIDE UNIT had thought to draw a connection between him and Helen throughout the film despite the fact that they both have the same fucking last names. Let’s repeat that for a third time. Public records show that Helen and Terry have a child together, and ALL THREE have the same last name. Anyone wonder why Dustin Hoffman was asking for a lot of rewrites of this script before he’d agree to do this film? Not me!

Anyways, Terry, orders Frank at gunpoint, to lie on his bed, and show how he made love to Helen. Terry confesses that he had done this with his ex-wife’s other three boyfriends before he killed them as well. However, at no point did Terry confess to wearing cornrows.

Frank is able to overpower Terry, because he is super cop, who gets in and throws a lot of punches, then gets out. He tries to call the police, but can’t dial 911 AND hold a gun at the same time. The killer makes a lunge at him and, in the ensuing struggle, Terry is accidentally thrown through the window and plunges to his death.

Frank and Helen reunite. She forgives him because that is how Hollywood works, and because he killed her psycho ex-husband. They resume their relationship, and Frank assumes the Terry spot angry white male who obsesses over Helen, because that’s God’s plan.