In this film by Neil Simon, Nick Gardenia is a struggling writer who is kidnapped by two men who force him to rob a bank. After the robbery, the kidnappers throw Nick out of a moving car and leave him no where else to turn but his ex-wife, attorney Glenda Parks. Glenda is shocked to find Nick in her home and works to keep him hidden from her current husband, district attorney Ira Parks. Eventually, Glenda will have to choose between the two men that she loves. 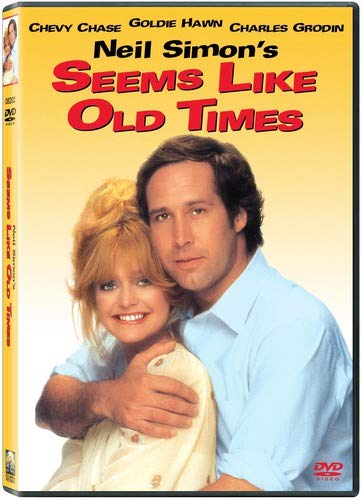 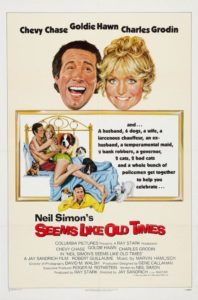 In Big Sur, California, Nick Gardenia (Chevy Chase) is a down on his luck writer who is desperately trying to write his breakthrough novel. His work is interrupted by a pair of bank robbers (Mark Alaimo and Judd Omen) who kidnap him to assist them in bank robbery in Carmel. The robbers’ plan is to make Nick rob the bank while they observe. The robbery goes off nearly without a hitch other than Nick getting his picture taken by the security camera. After the robbery, the robbers keep the money and throw Nick out of the car while it is moving.

Not long after, Nick’s bank robbery picture is shown to Los Angeles district attorney Ira Parks (Charles Grodin). Ira recognizes the picture as Glenda Gardenia Parks’ (Goldie Hawn) ex-husband. Glenda is Ira’s current wife. Ira is actively seeking to become California’s next attorney general and is afraid that Nick’s involvement in the robbery might derail it. Ira asks his assistant Fred (Robert Guillaume) to work for a quick apprehension of Nick in order to minimize the public spectacle.

Meanwhile, Glenda is a lawyer herself, working as a public defender who represents clients that desperately need her help. Glenda is a true believer who wishes not only to represent her client but to rehabilitate them as well. She hires many of them to do odd jobs around her and Ira’s house. Glenda returns home after a day in court and is informed about the good news of Ira’s political run and the bad news of Nick’s bank robbery. Glenda informs Ira that she does not believe that Nick is capable of robbing a bank and tells her husband that she wants to represent her ex-husband once he is apprehended.

I think the three of us make a wonderful pair. Nick Gardenia (Chevy Chase)

Nick makes his way to Glenda and Ira’s Brentwood home. During a party for Ira’s campaign announcement, Glenda finds Nick hiding in her garage. Nick begs for Glenda’s help. Glenda agrees to allow Nick to stay in the couple’s spare room above the garage and provides him with some food. Nick tells Glenda what happened to him. Glenda believes him but insists that he turn himself in if he wants her to represent him.

The next day, Nick is nearly discovered several times by Ira and Glenda’s cook, Aurora De La Hoya (Yvonne Wilder). Nick decides that he wants to go after the guys who kidnapped him so that he can prove his innocence. Glenda works extra hard to prevent everyone from knowing that Nick is in the house. Ultimately, Nick “steals” Glenda’s car from Glenda and her chauffer Chester (T. K. Carter), another former client of Glenda’s. Once Ira learns that Nick was in the house, he begins to argue with Glenda. Glenda and Ira eventually settle their argument and begin to get intimate in the guest room, but Glenda discovers that Nick is back and hiding under the bed. Glenda rebuffs Ira’s advances which leads to another fight.

Not long afterwards, Ira learns from Fred that Nick was accompanied into the bank by the two robbers who have a history of involving innocent people in their bank robberies. Ira is frustrated to learn that Nick maybe telling the truth as he has become a threat to his relationship with Glenda. Nick once again decides to leave on his own and steals Ira’s car this time.

That night, Ira is hosting a dinner with the California governor (George Grizzard) and his wife at his house. Fred and his wife are also in attendance. Aurora informs Glenda that she has to go in for surgery to have her feet scraped so she will not be available to cook the meal. Glenda is left to make the meal and Chester is left to serve the meal. Glenda successfully cooks the meal, but Chester drinks himself into a stupor. Fortunately, Nick returns to turn himself in but ends up serving the dinner to the guests. Ira and Fred are aware of Nick’s presence. The dinner ultimately ends in a fistfight between Ira, Nick, and Fred. The governor politely eats his dinner and engages Glenda in conversation during the fight.

Not long after, Nick appears for his arraignment in front of Glenda’s favorite Judge John Channing (Harold Gould). Glenda appears as Nick’s attorney and Ira appears as the State’s attorney. Glenda attempts to convince the judge of Nick’s innocence while Ira works to keep in Nick in custody. During the hearing, the police bring in the bank robbers who were apprehended when they attempted to kidnap Aurora for another bank robbery. The robbers admit Nick’s innocence in exchange for reduced sentences. The case against Nick is dismissed, and he is allowed to go free.

Outside the courthouse, Nick asks Glenda to leave Ira and come with him. Both he and Glenda admit to having unresolved feelings for each other. Nevertheless, Glenda rejects Nick’s offer and the former couple kiss each other goodbye as Ira watches on. A short time later, Ira and Glenda go on a vacation to get away from all the stress and find themselves lost during a rainstorm. They accidentally drive off the road never Big Sur resulting in Ira breaking his leg. Glenda goes out into the storm to find help. She finds a remote cabin and begins pounding on the door asking for assistance. Nick opens the door and Glenda’s panic turns into a loving smile.